By WeatherFlow meteorologist Shea Gibson on 9/9/2020

We certainly had a tough time this year pronouncing the name “Isaias”, which led to several meteorologists stumbling over the name at least once or twice during discussions. But this also sparked interest in how these names are picked, what other names are on the list and how this list came to be.

Well first let’s talk about some history. For hundreds of years and up to the 19th century, hurricanes in the West Indies were named after the saint’s day on which the hurricane formed. We do have names such as “Hurricane Santa Ana” and “San Felipe” for examples from many years back, but it was found that ultimately these storms had to be documented by year. Through 1949, the US names storms after numbers, years and even attached months or Holidays to them (Great Labor Day Storm of 1935 for e.g. – which was formerly known as Hurricane Three). So you can imagine the confusion over time as more and more data was collected. In 1950, storms began to be named by a phonetic alphabet (Able, Dog, Love for e.g.), which then switched to an international phonetic alphabet until 1953. At this time, the US began applying only womens’ names to storms. Australian meteorologist Celmente Wragge has already started naming tropical cyclones after womens’ names in the Pacific in the 19th century…and it was used by the US Navy and Air Force ahead of this new naming system. These womens’ names were applied to every tropical cyclone until 1979, when both male and female names were integrated into a 6-year storm name list. In other words, a list of names was generated for the next 6 years and it would be recycled starting back at year 1 once the 6th year ended. The names are staggered in a male, female, male, female order. This is how it is still done to present day and is controlled by the World Meteorological Organization (not the NHC). Here is the 6-year list of names as of 2020.

So to recap, in 2026, we will re-use the list from 2020, minus any storms that are retired. In order for a storm to be retired, it has to be costly and deadly enough that the World Meteorological Organization votes to retire it (Florence and Michael for e.g. of recent years). Once a storm name is removed from the above list, it is replaced by a another selected name so the list remains complete.
Here are a list of storms that have been retired since 1954:
Side note:  Hurricane Dorian 2019 is still pending review due to COVID19 restrictions on WMO multi-member gathering & travel , but we do expect it to be retired in time. 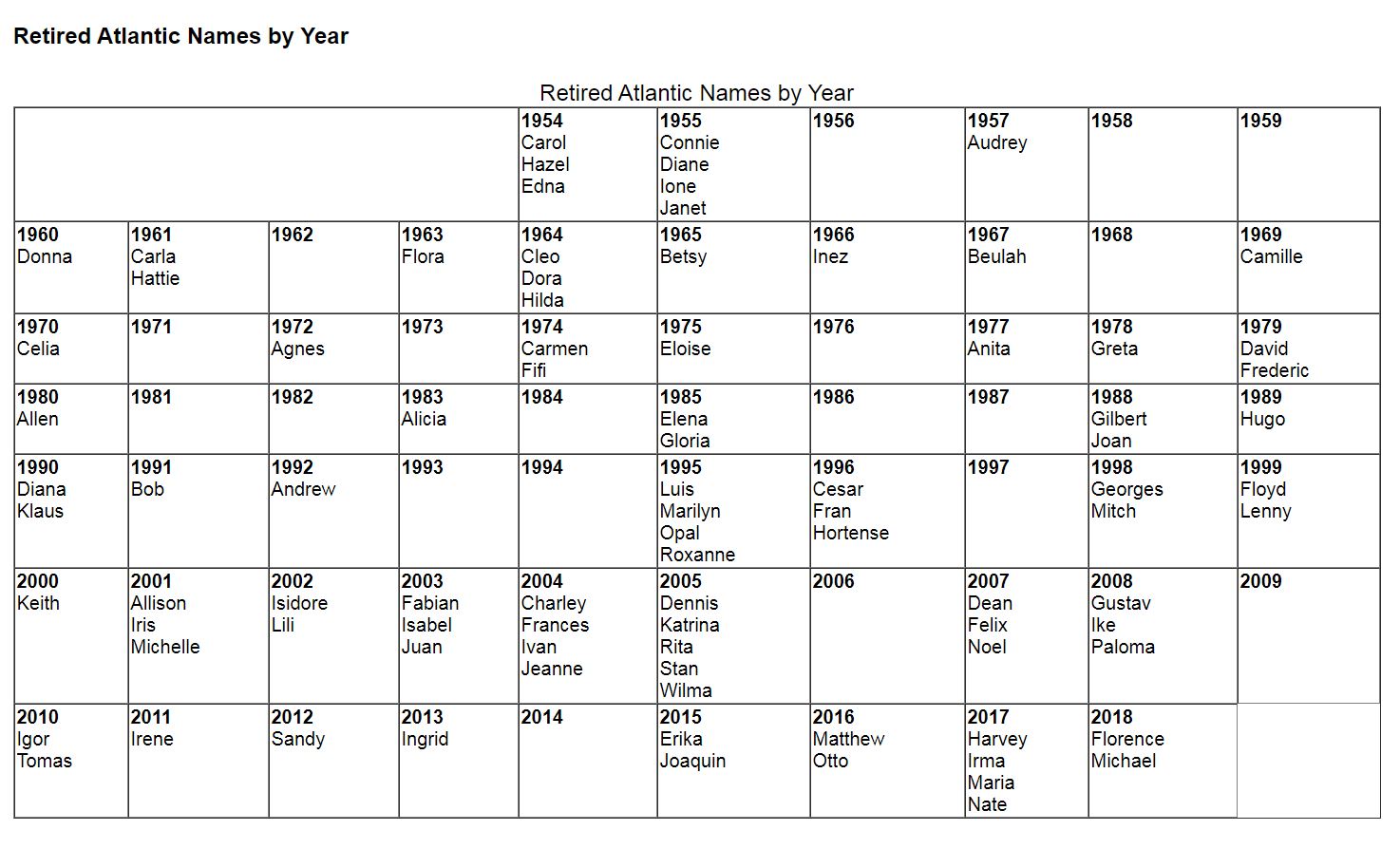 Ok now we talk about how the names are picked? For the Atlantic basin, the cultural language aspects were deemed the correct for for this naming system. The three primary languages of the Atlantic basin are French, English and Spanish. The names are selected by the cultural origin and rotated into the list. This gets us back to that weird name this year, “Isaias” (pronounced ees-ah-EE-ahs). This name is actually a Spanish and Portuguese mix that you may find in Brazil, which is in South America and is fair game for picking.  So now you know the history and the naming convention.

Now the big question for 2020 is…and we are almost at the end of the names as of 9/9/2020 (next name is Sally)…what happens if we run through all the names in our list? Well there is a back-up plan. It is called the Greek alphabet. These will be used if necessary and we did this in 2005 for the Atlantic basin and got to #6 in the Greek alphabet to “Zeta”. Now if we ever were to beat the improbable odds and go through that, then you got me.  My best guess is that the WMO would have to scramble to figure that out.

So we hope we do not get into the Greek alphabet, but this year is very active as we round the September 10 peak day of the season.

This graph uses 100 years of data to generate a rough estimate of when the hurricane season is most active. If we used 10 or 50 years of data, then we know that the graph would be more erratic due to smaller time frame variants or anomalies. Even though HURDAT records date back to mid 1800’s, data has been better quality over time and thus the 100 yr outputs. So when we hit 200 years of quality data, then we are likely to us that record period for governance.

One more tidbit here: If a storm happens after November 30th, which marks the end of the hurricane season (June 1st – Nov30th each year), and it is before Dec 31st, then it gets the next name on the list. If after Dec 31, then it rolls into the next year (Hurricane Alex 2016 that formed on Jan 13th and made landfall over the Azores, for e.g.).

Now you know more about naming conventions in English, Spanish, French and Greek…as well as the historical output for activity through each year to present. Hope this helped answer many questions and helps to understand where these names come from.

Until next time, stay safe and have your hurricane plans ready to execute! Remember if you live along the coast, it is not a matter of IF, it’s WHEN.