Was That Snow in Southern California?

Blog.WeatherFlow.com > California & Baja > Was That Snow in Southern California?
By Kerry Anderson 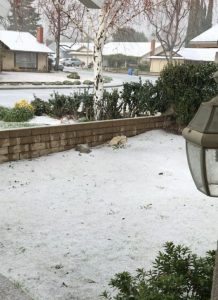 There were lots of reports of snow in Simi Valley, a suburb of Los Angeles, on Thursday.  Obviously, this is not a typical weather feature for the Southland so there was lots of excitement. But was it really snow?   Well let’s take a closer look and you be the judge.

First off, it sure looks like snow.  Our thanks to Jason Mann for this photo of his yard where the ground was covered in the white stuff.  Traffic was slowed as it piled up on the roads and stuck for a while.  Kids were able to scoop it up into balls.  It sure appears to be snow. But before you start telling everyone that it snowed in Simi today let’s take a look at a few other variables. 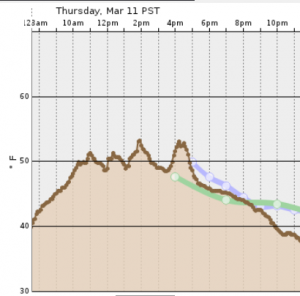 If not snow then what was this?  We have some other clues to help us in our investigation.  At the same time that this fell, there were reports of short bursts of strong winds, tall dark clouds, and lightning.  As you may have guessed what we really had was hail. that developed in a thunderstorm cell. 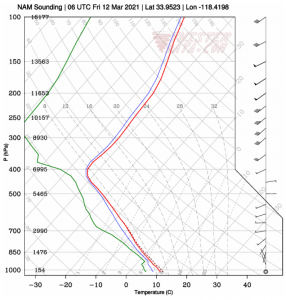 This is a very unstable condition because the warmer air near the ground is less dense, wanting to rise. This will start clouds forming.  If the air is very unstable, they continue to grow and can become tall thunderstorms, with strong up and downdrafts, that will allow hail to grow.   If the thunderstorm grows large enough it can produce enough hail to coat the ground and give the appearance of snow.  And if the hailstones are small they even look like snow and you can scoop them up and make a slushy ball.  But with the warm ground temperatures, this type of hail does not last long, as was the case with this event.