The sensor reading says the winds ramped up to a useful range. But… 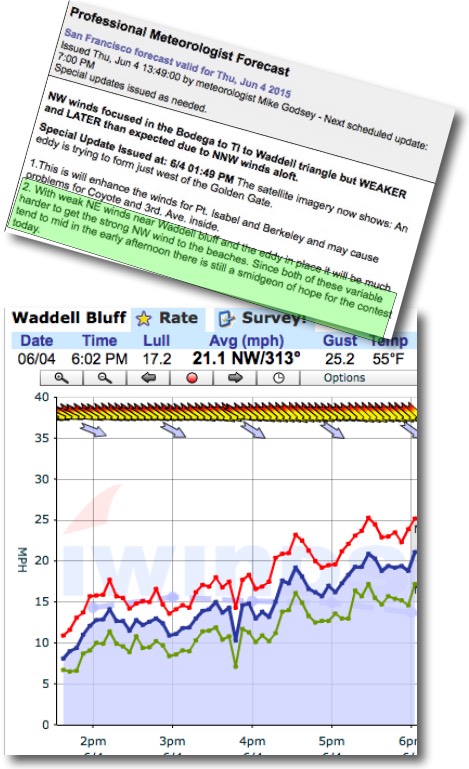 by Mike Godsey, mike (at) iwindsurf.com

Update 7AM Friday: Feedback was that the Waddell forecast for late winds was spot on! Whew!

If you look at the green part of my special update I mention that despite the sub teen wind at the Waddell sensor due to NE winds aloft above the bluff there was still a chance of useful winds for the AWT contest.

But reading between the lines you can tell that I was really worried. Actually I still am worried since I know from personal experience that those NE winds can fool the sensor since the NW wind may reach the spinning cups but NOT the water on the impact zone. So although the sensor wind graph says I deserve a pat on the back I am still braced for a kick in the ass. So I will not declare this a decent forecast or bust until someone mails be at the address above.

So why all the uncertainty? Basically the NNW to NNE winds that I expect to spoil the Waddell winds Friday arrived about 12 hours early. And northerly winds aloft tend to push the NW wind inbound towards to Waddell.

The first hint of this happening was the Año Nuevo clearing. Typically the cloud burn off is helped the NW flow. But today I noticed that the clouds near Año Nuevo were also moving to the SW in distinct waves. This clued me to look at the winds on the hill tops on the Peninsula. And they showed NNW. So I issued the update you see in green above.

So let’s look at those NW surface winds from the NPH and the NNW to NNE winds from the ridge the NPH is sending into Oregon. Looking at this animation you will first see strong NW wind way offshore of Waddell. As is typical these winds are faint in the AM but by 3 PM the pressure gradient should bring them close to the impact zone. The watch as the animation changes to the winds at about 1000 feet. Notice how they are more NNW to NNE. This flow tends to push the NW wind away from shore. For complex reasons the NNW to NNE wind fades mid day to mid afternoon.

which you see in the wind graph starting about 4:30 PM which is basically what I suggested might happen. Now the question is… did this wind reach the water.