The fate of the Southern California coast winds hinges on the victor and I guarantee that these 2 winds will not kiss and make up!

Today, May 14, we saw a remarkable battle between two locally strong wind opponents.

In this first image from 8AM you can se the strong NW winds along the California coast and over the Southern California waters west of the Channel Islands. Notice that this NW flow has played a role in

spinning up a Catalina Eddy.

This eddy created low to even mid teens southerly winds along the coast from San Diego to past Leo.

The third image below shows these opposing winds from the WNW and the SE. Notice how the winds almost been in the diamond area between Ventura’s C St. and Leo.

So when I was doing the 11:30 forecast I had to look at this battle scene and make a decision: Should I forecast building southerly eddy wind giving way to mild WNW wind or should I forecast an abrupt death of the Catalina Eddy and strong westerly winds arriving on the coast? 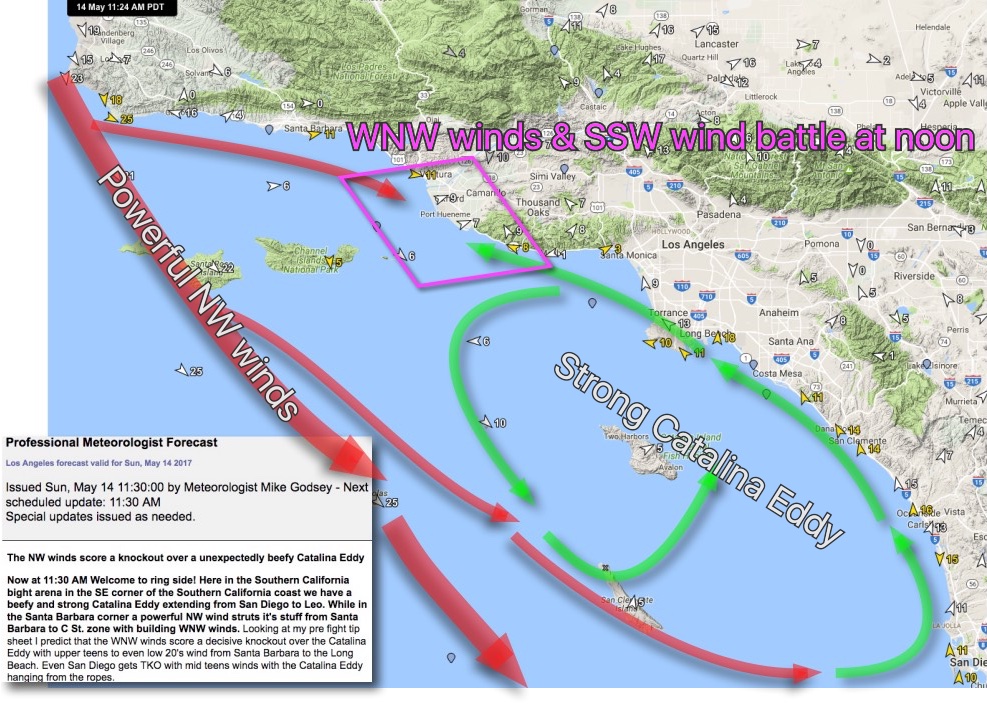 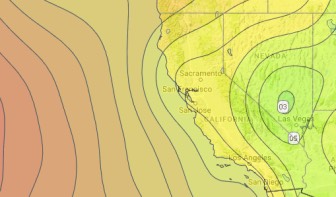 The key to making the decision was the strong pressure gradient forecast between Southern California and the Great Basin. Heating

of the Southern California deserts by itself makes a moderate pressure gradient but if the hot air from those deserts is pulled to an even deeper low pressure in the Great Basin the overall pressure gradient from the coast to the inland is even stronger.

As you can see in the next image that I annotated and animated from nullschool.net in the afternoon there is a lot of wind from Southern California towards the Great Basin.
Typically when this happens the Catalina Eddy dies fast while the NW winds curve in as  WNW winds along the coast.
In the next image you can see that the models finally captured this process.

First note the strong NW winds over the outer waters even at dawn. Then watch as the winds increase over the Southern California deserts towards the Great Basin. Then you can see the rapid demise of the Catalina Eddy. And lastly watch as the westerly winds hammer the coast especially from Leo northward.

As I write this at 1AM much of the above paragraph is still theoretical. I will leave it up to you as the day unfolds whether I was correct.

UPDATED below this graphic at 3:30PM

Now at 3:30PM we can see the eddy winds dying and the westerly winds have reached to past Leo to Topanga.
I expect the Long Beach area to turn westerly in the next hour. Below is graphic animation showing the changes so far.

And here in the bottom image is a final update at 5:30 PM.

Looking at this last animation you can see that the NW winds were briefly victorious over the southerly Catalina Eddy winds from Santa Barbara to just past Leo.

But looking at the Long Beach area you can see

that the westerly winds never full reached most of Long Beach.