The Gorge Roars while AM eddies rule in the Bay Area and Southern California. 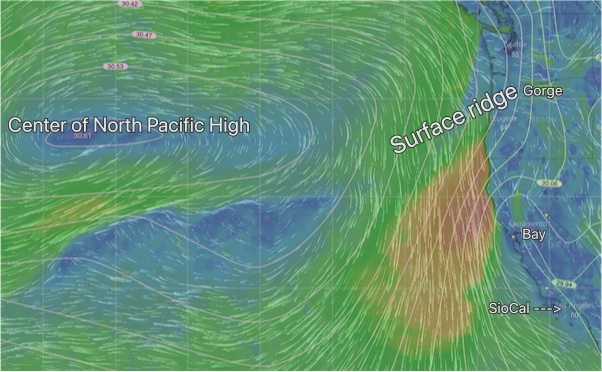 Although this discussion sort of looks like English it, by necessity, uses some meteorology jargon.

Let’s start to decode this discussion using this imagery. First find the Gorge, Bay and Southern California in the image. Now look about 1000 miles to the west where the center of North Pacific High resides today. The NPH is a dome of high pressure created when air from way aloft descends and compresses creating higher pressure. This higher pressure air then spirals outward in a clockwise fashion which you see in the image above. The white lines are isobars and show areas of equal pressure. The closer the lines are to each other the greater the change in pressure. This is known as a pressure gradient. Notice how the isobars are really tight off the California coast and over the Gorge. The direction of the wind is at an angle to the isobars so the shape of the North Pacific High determines the winds direction unless topography steers the wind.

Now notice how the NPH has a bulge over the Pacific Northwest and far Northern California. This is called a surface ridge. In the case of the Gorge the ridge’s isobars run from N. to S. and they are packed close together. However the winds are funneled by the steep topography of the  Gorge so the winds is more W. to E. The narrow walls of the Gorge also accelerate the winds.

Next check out the bend in the ridge’s isobars from the surface ridge over Northern California. Note how they are oriented more W. to E. This means there is an N. to S. pressure gradient. This means northerly winds in the Central Valley.

One last variable to note. See the loop in the isobars extending up from Southern California and over the Bay Area and Central California coast? This is a surface low-pressure trough. This will make the AM wind very weak in that area.

The combo of the low-pressure trough and NNW ocean wind tends to cause counter-clockwise spinning eddies to spin just off the Golden Gate and for most of the Southern California Bight.

Today the NPH ridge retreats from over Northern California midday and the low-pressure trough retreats to the Central Valley. If this happens as expected the ocean winds is less NNW and eddies will die. So despite the gloomy start of the wind the winds conditions often improve at select sites.