Here is a sampling of some of the words I used in my Saturday 7AM forecast to describe what I expected:

Bizarre, Wind could die fast, Variable winds (3X) UP AND DOWN (5X), weather picture is a mess today, rest of the Bay Area will be iffy, clouds from Linda may shut down the Bakersfield pressure gradient, Peninsula winds iffy, Fog permitting: (4X).

I guess I was trying to convey that things would be really weird but light at most sites but I stressed that there were powerful 40-50 knot gusts just aloft but I did not expect them to hit the surface at sites inside the Bay.

“dangerous for kite launching” warning and a fellow waterman died that afternoon.

So not forecasting dangerous conditions with 50 knot gusts overhead had me sweating bullets yesterday.

Looking at the orange Bodega profiler data you can see the blob of powerful NW wind just aloft yesterday.

It turns out I made the right decision except as these customers pointed out, for Stinson, Bodega and Tomales:

Mike,
Can you back cast todays wind at Stinson beach? I arrived 2ish dead calm. An hour later was almost leaving and it was starting to blow NW through tomales gap. 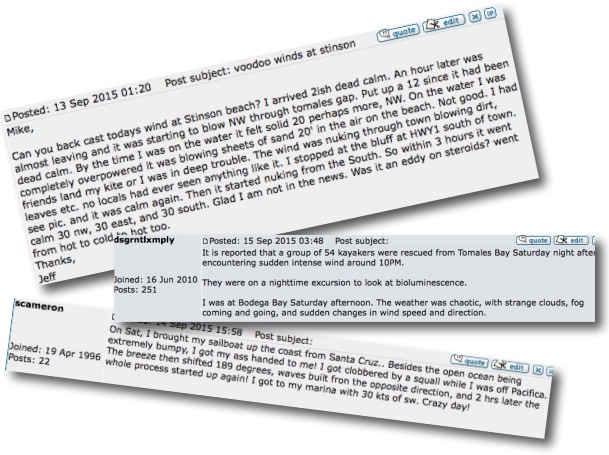 Put up a 12 since it had been dead calm. By the time I was on the water it felt solid 20 perhaps more, NW. On the water I was completely overpowered it was blowing sheets of sand 20′ in the air on the beach. Not good. I had friends land my kite or I was in deep trouble.

The wind was nuking through town blowing dirt, leaves etc. no locals had ever seen anything like it. I stopped at the bluff at HWY1 south of town. see pic. and it was calm again. Then it started nuking from the South.

So why the weird and crazy wind at Stinson? First look below at the wind map of the Bay Area and find Stinson. Notice that Mt. Tam, near Stinson, had gusts to 50 knots while some East Bay hills had gusts over 40 knots.

Since the air in these gust were composed of unstable air I felt that for most of the Bay Area they would just pass overhead. Or if they opposed the surface wind they would just weaken the wind.

But I knew from experience that they would impact the forecast low 20’s wind at Sherman by making the wind very up and down UP AND DOWN. Plus random descending gusts that impacted the surface would make the sensor average read high.

I had one e-mail from a loyal customer who was kiting at Sherman Island  complaining that the wind at the sensor was not at all what he felt on his kite in the up and down winds.

He had no way of knowing about the ferocious winds just aloft that would at times jack up the sensor reading.

Now look at the first satellite image. See what looks like an explosion SW of the Bay Area?

This is from a Cut-Off Low at ≈ 18,000 ft. that was jazzed up by moisture from former Hurricane Linda.

For most of the Bay Area the winds from the Cut-Off Low just interfered with and weakened the surface wind.

But as Stinson locals know there massive wall like coast range ridge right behind the beach.

Looking at the second satellite image the green arrows near Stinson you can see that as this above surface wind hit that ridge at right angles it could either turn NW or SW.

As it switched from NW to SW it stirred the surface winds as you experienced and documented in Jeff’s photos.

This is an extremely rare event but I will try to watch out for in the future so I can post a Stinson warning. 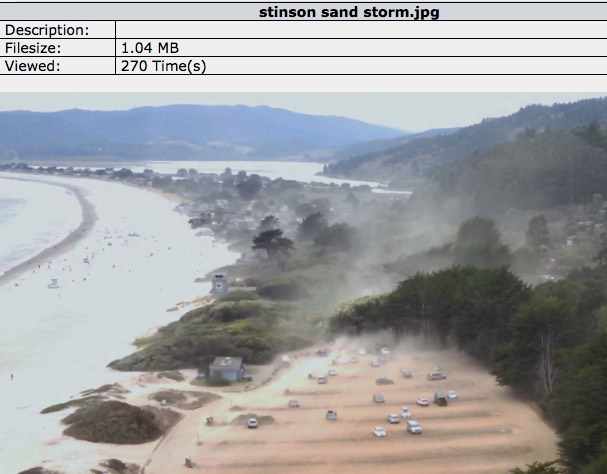