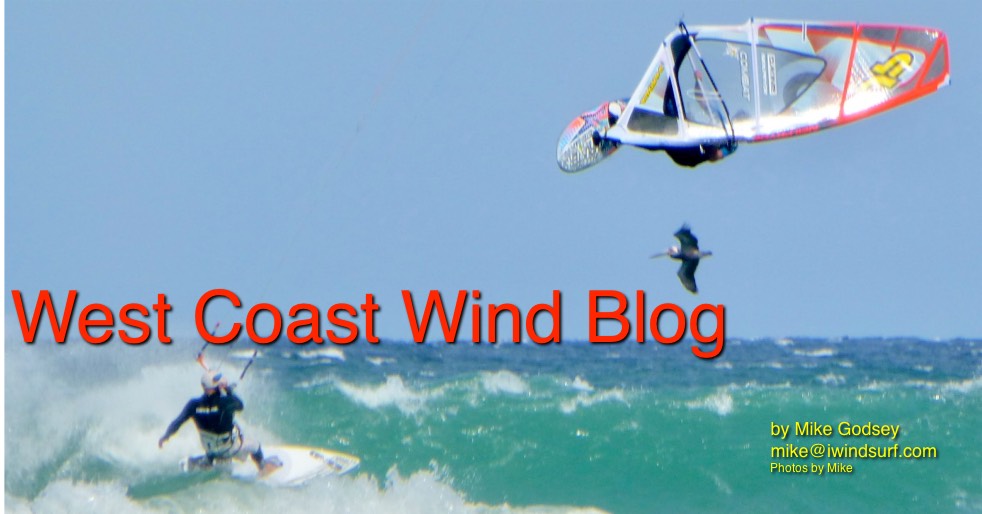 About 25 years ago, when the first windsurfers “discovered” La Ventana, “Weather Man” Tom and I started studying Baja winds using the daily data collection form you see in this first image.

Since then my main goal was to figure out what caused the La Ventana and Los Barriles, located on Baja’s East Cape, to have the strongest most reliable winter winds in Baja so we could forecast the winds rather than just waiting for wind.

This first image shows the sort of daily records we kept of variables we tracked to get insight into the wind patterns. One thing that is clear… most of the models do a poor job of forecasting Baja winds. Just check out the notice on the Capt. Kirks web page. A bit exaggerated but it gets the flavor.

Through the years I have concluded that the causes of these highly focused Baja winds are complex. But the short answer is that many places on the Sea of Cortez side of Baja receive the rare very strong El Norte winds.

But most of the time the El Norte winds are relatively weak low to mid-teens range.

So to get winds reliable winds above the low teens you need special topographic features and a combo of winds to augment the El Norte winds to create at least upper-teens wind.

And Los Barriles, and especially La Ventana, have near perfect topography for frequent reliable winds in the mid-teens to mid 20’s range.

Baja is a 760 mile long Peninsula with a mountainous backbone and 1900 miles of coastline.

Baja has a relatively cool Pacific ocean to the west and a much warmer Sea of Cortez to the east.

La Ventana and Los Barriles are located towards the tip of the Peninsula about a 3-hour drive north of the tourist traps of Los Cabos.

Looking at these graphics you can see that both locations have large valleys downwind that impact the local sea breezes and the synoptic scale El Norte wind.

La Ventana’s Los Planes Valley is surrounded by mountains of 3 sides which means that expanding air heated from the sun has nowhere to go but up. And this creates a local low-pressure zone and a strong local pressure gradient from the Sea of Cortez towards the valley.

Unfortunately, the valley downwind from Los Barriles has mountains on only 2 sides and is open to the south. So some of the expanding air “leaks” to the out so this valley produces a weaker local pressure gradient.

This means that Los Barriles has weaker local sea breezes.

However, Los Barriles sticks further out into the Sea of Cortez so it receives stronger El Norte wind and larger swell near the beaches

Let’s examine each of these patterns using imagery:

Big El  Norte winds occur after a storm passes over California. Then in the wake of the storm, a large high pressure often settles into the Great Basin.  You can see the start of this process in this animation.  Watch how isobars tighten over the Sea of Cortez as the high pressure moves into the 4 corners.

The perfect location for strong Baja winds is for the high pressure to be centered over the 4 corners area.

Usually, major El Norte winds arrive in the middle of the night and dawn sees very strong winds just outside and large building surf on the beaches.

El Norte surface winds are often accompanied by strong winds just aloft and as these wind hit the cliffs and points of the rugged Baja coast they become turbulent and transfer a bit of momentum to the surface winds that make the wind in your kite or sail UP AND DOWN and shifty.

This pattern is easy to forecast since models track such large scale pressure system accurately.

In this pattern, there are mild El Norte winds in the mid to upper-teens range. By themselves, these winds would mostly stay way outside. But if the skies are blue the inland valleys heat creating a local pressure gradient.

That pressure gradient does 2 things.

1. It causes the El Norte wind to curve in towards the beaches.

2.  it creates a local sea breezes in the low to weak upper-teens range that combines with the El Norte winds. The combo of these winds reaches the upper-teens to low 20’s range.

The key to this pattern is the blue skies or at least patchy clouds inbound towards the inland valleys.

Pattern 3: El Norte winds + weak NW wind from NPH on the Pacific side

This pattern is most common in El Nino years. It happens when high pressure in the Great Basin creates moderate El Norte winds which curve to the beaches due to the local pressure gradient. 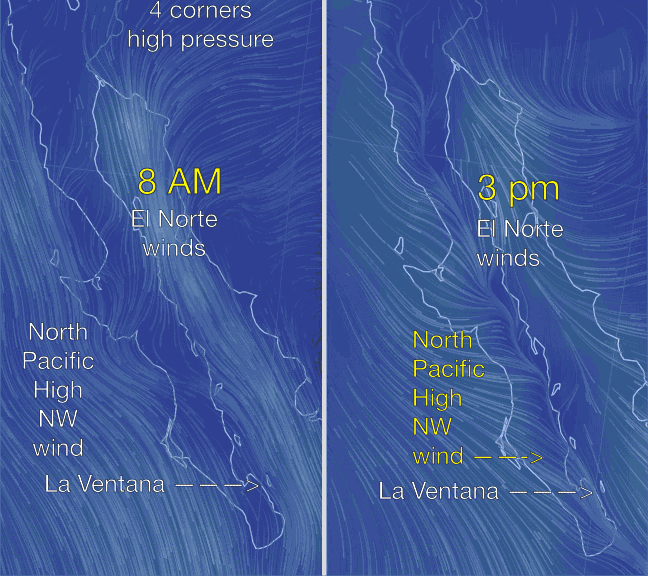 But as the day progresses the wind winds inside become very gusty or shifty or very weak. This is especially true at La Ventana and especially at El Sargento north of La Ventana. While Los Barriles typically has steadier winds during a strong El Norte.

This animation below shows why this happens. Notice in the left image at 8AM the El Norte winds flow smoothly down the Sea of Cortez. If the North Pacific High and its NW winds are far from Baja this smooth flow continues through the afternoon. So the El Norte winds are steady and close to shore while the big swell is smooth and starts only a few hundred yards from shore.

However, if the North Pacific High’s NW winds are close to the Pacific side, as in this animation, there is a problem. As the interior of Baja heats up the NPH’s NW winds are sucked through gaps in the mountains of Baja. Looking at the 3PM image you can see this happening. This NW flow from the Pacific tends to push the El Norte winds further from shore.  This NW wind is turbulent so the El Norte winds seem gusty and shifty as the 2 winds interact. This NW flow also causes a small cross chop to develop over the normally big smooth El Norte swell. Even without computer models, you can anticipate this effect.

This is the most local pattern and produces the weakest winds except occasional wind drought.  As the inland valleys heat and warm the air a low-pressure zone is created. This air rises and heads seaward for several miles where it cools, descends and is attracted to the low-pressure inland. If you kite far enough out you will run out of wind

The key to this wind is mostly blue skies over the inland valleys. If the weather is fair and cloudless and there is no hint of an El Norte Baja’s East Cape is likely to see these low to weak upper-teen local sea breezes.

However, if there is a storm to the north or if the subtropical jet stream is overhead things get dicey. In this situation, we need a large hole to develop in the inbound clouds from about noon to mid-afternoon that will allow heating inland. And as you can see in these images the cloud pattern can change fast. So if the forecast suggests local sea breezes your best bet is to watch the skies to the east over the valley

front moving towards the beach. You can see such a front in image #2 above.

This is an uncommon pattern and since the NW winds have to travel over relatively warm terrain and take a circuitous pathway across the Peninsula they are usually weak, shifty, up and down with an unfavorable offshore angle.

The next animation shows this pattern in action. First, note that there is NO El Norte wind coming from the Great Basin.

Instead, there is very strong NW wind from the North Pacific High ripping down the Pacific side of Baja.

Since the Sea of Cortez is relatively warm compared to the Pacific there is a slight pressure gradient that curves and sucks some of the NW wind over the Peninsula anywhere where there is a low spot in the mountainous backbone of Baja.

I have highlighted some of the places where this happen in the animation. Notice how some of this wind comes across the Peninsula and hits the La Ventana and Los Barriles area. You can see how this will be offshore wind.

However, if there is strong heating in the inland valleys near La Ventana this NW wind may curve into N. wind and provide strong wind just outside.

At the beach, the wind will probably be up and down and shifty since some of the NW wind leaks over the mountains just inland. 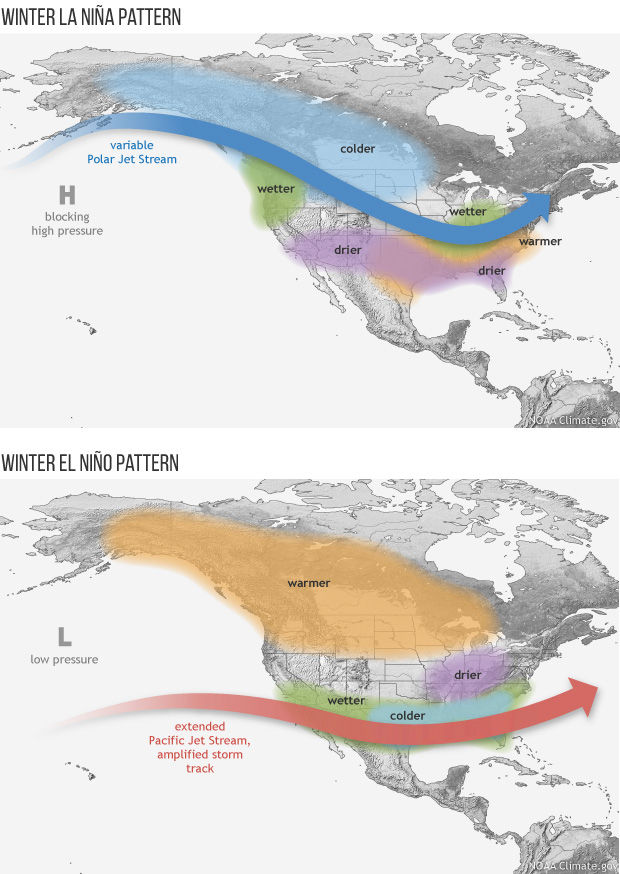 The more northerly or more southerly route of the average storm track is pivotal in determining the location of the high pressure relative to the Great Basin. And this, in turn, determines the strength of the El Norte wind.

El Nino and La Nina also impact the pathway of the subtropical jetstream and its clouds which in turn influence the local sea breezes.