There was a recent forum thread on the Gorge Classic iwindsurf.com page asking “are there gustier winds this summer?”

The forum thread had answers ranging from “Obviously!” to “I hear this every year!” How you expereince gusts is impacted by many things like your gear, sail size, years in the Gorge and how good of sailor your are. Moreover, human memory is unreliable and easily biased.

So I have been looking at the Swell City sensor gust lull data. This sensor has its flaws but every one of you looks at that data so it is safe to assume it is somewhat useful.

year vs. 2018 vs. 5 years ago vs. 15 years ago for the month of July. It is a massive amount of data but already the answer is emerging. The gust lull ratio has increased somewhat.

But this is not the real problem with Gorge winds in recent years.

Years ago strong gusty dawn patrol winds were the essence of Gorge windsurfing. All you needed were low compact marine layer clouds filling the western Corridor and a strong pressure gradient. For reasons I will get to that pattern started becoming increasingly less reliable. That is not to say we don’t still get epic days. And this May and August had some great days. But somethings have changed.

Since my windows look down Columbia from the White Salmon Bridge to way past Viento the changes were obvious to me. So about 12 years ago I started doing the Hatch and Swell Bluff report several times each morning. This Bluff Report describes what I am seeing from my house versus what the sensor is reporting.

It was clear to me that in the early morning the winds on the water were frequently either far weaker or stronger than what the sensor was reporting from atop the small cliff at the east end of the Swell City parking lot. This was because of gust and lull bands slowly marching down the corridor in the early morning. 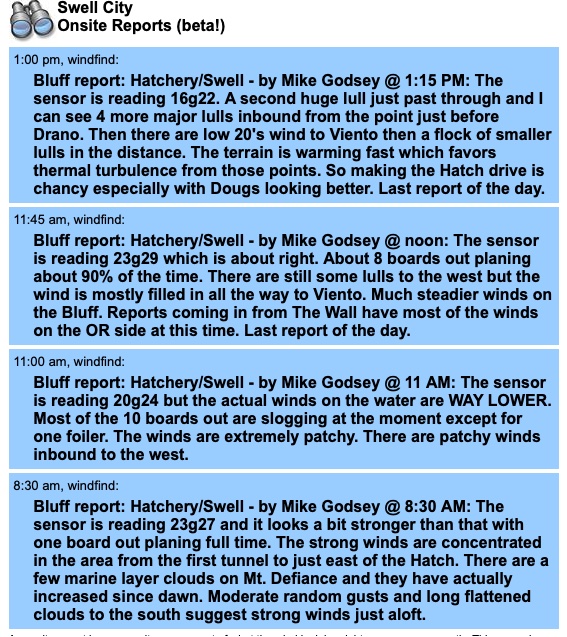 In the early years I would do 2-3 of Bluff Reports until the gust and lull bands subsided and the sensor and the wind on the water were about the same which was typically between 9 and 10 AM. And I would sign off the final report with a “Last report of the day.” which meant I was on my way to the Hatch and there were likely to be solid gusty winds much of the day with perhaps a “mid-day” lull.

But in recent years it became much hardier to do a meaningful Bluff Report. The gust and lull bands west of the Hatch and Swell zone became larger and more numerous and lasted more of the day. This made doing the Bluff Reports way more difficult.

So, for example, I would do a 10 AM Bluff Report saying the sensor and the white caps both agreed that the winds were mid 20’s. But then 15 minutes later I would look out the window and see a lull band moving into the Hatch and Swell area and the winds were only mid-teens.

You can see this issue in my Bluff Reports for yesterday, August 24.

Let me show you what these gust and lull bands look like from my house. This is what I saw at the 11AM report above. Notice the lull band right off Kodak Point at the Hatchery and the second in the “Basement” area between the Hatch and the White Salmon Bridge.

Then the 4 lull bands west of Swell City and the large Point east of Drano. And in the far distance, you can see more lull bands. Interspersed between all these lull are strong gust bands.

n the water or at the Hatch or Swell launch sites you can’t see these bands. What you do notice is the wind looking really good and then a while later looking really bad. And if you are on the water when the transition from a gust to lull band passes the wind seems really up and down.

So what causes these gust and lull bands?

The Gorge has always been a gusty place for several reasons.

Over the last decade factors, 1 and 4 and 5 above have changed.

Poiint 1. All along the west coast the average depth of the marine layer has thinned. This has radically changed the windsurfing and kiting for many places. For example, Sherman Island, in the San Francisco Bay Area, used to be renown for steady winds peaking in the early morning and afteroon and often lasting all day. Now with a thinner marine layer it sees those winds less frequently. In the Gorge it means the marine layer clouds do often do move as far inland in the afternoon. And that means a greater gust lull ratio. The reasons for this are complex but basically, for a deep marine layer you need a cooler ocean.

Point 4. The Gorge average summer temp. pattern used to be simple. There were warm days and cool nights with lots of gusty with low to mid 20’s days with a marine layer in the far corridor to  Mt. Defiance that burned back quick. Then several times each summer there would be a 2-3 day heatwave well with temps over 100 and the river was glassy calm and you would see kayaks, waterskis, SUP’s on the water.
Then the heat would end abruptly with the first day having a huge surge of marine layer clouds and  very strong UP AND DOWN winds.
Gradually the pattern of heat has changed. Heatwaves were not as hot, more like low to mid 90’but they 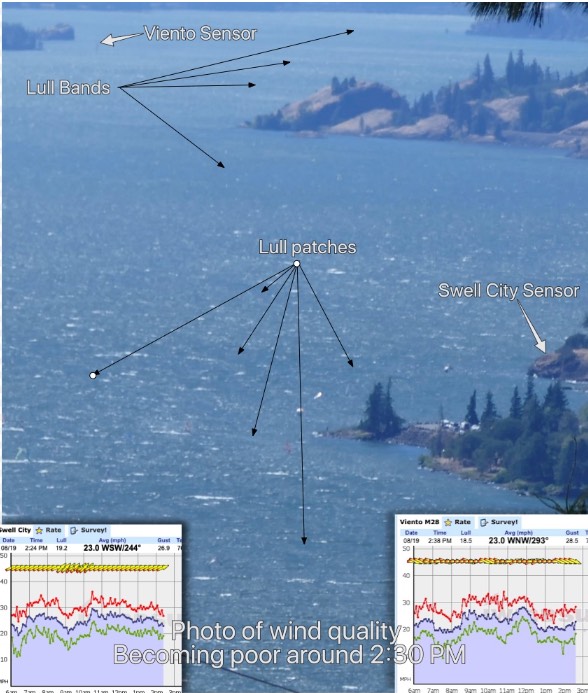 lasted 3-5 days then 4-7 days and they became much more common.  Now we 100+ degree heat waves are less common but it was warmer all the time and the evenings did not as cool. The reason for this is increased moisture in the local atmosphere. The average relative humidity has gone up and increased water vapor puts a cap on really hot temps.
All of this was correlated with the increasing gusts and lull patterns and more days with unreliable wind. Why?
The hotter the average temperature and the fewer cooling marine layer clouds the hotter those land points to the west of the Hatch and Swell become. This means more parcels of hot air rising which in turn means larger more frequent gust and lull bands.
It also means in general more rising air which makes the wind pattern you see in this next photo more common. Notice that you not only have gust/lull bands but also lots of lull patches which you see as slicks. I can watch people blasting on a full plane slow and slow as they hit these patches. Unless of course, they are a good enough sailor to immediately turn downwind to ride a swell.
Point 5. Remember the days when you just watched the Maryhill sensor reach 27 (or the Arlington sensor reach 25) and you hit the road with fair confidence that you would get in at least several hours of great winds and swell? As you know that simple wind equation no longer works as well. Too often you get to the Wall or Roos and find most of the wind on the Oregon side of the river. Why?
Because the summer North Pacific High is larger and much further northward than past decades. This means it more likely to be distorted by passing systems and kinks further inland. And this adds more of an NW component to our winds just aloft. And those NW winds interact with our surface winds to make them a bit less WSW and more W to WNW. Look at a relief map and you can easily see what this will do to the Wall and Roosvelt winds. And it even impacts the Hatchery.
The net result of all this is fewer days with solid winds lasting from dawn to dusk. And the days when you could glance at the sensor and see 25 mph and hit the road knowing you would be sailing for sure are less common.
More later!
August 25, 2019in NorthwestBy Mike GodseyMore from Mike Godsey