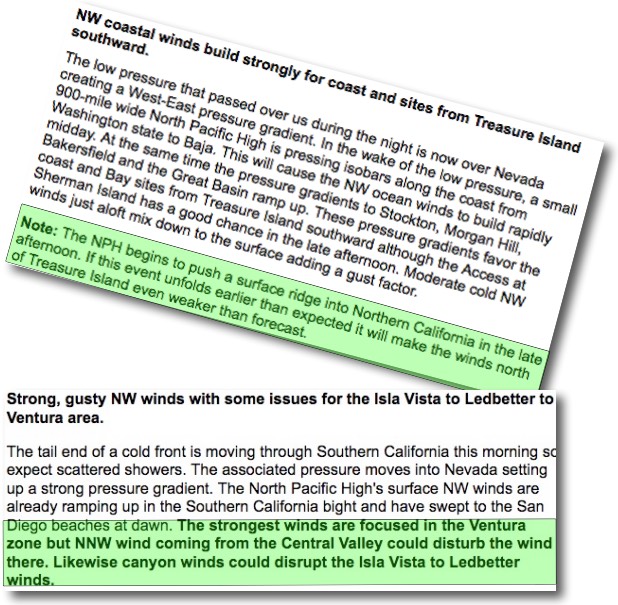 This should mean strong winds for most of the Bay Area and Southern California, but…

Take a look at my forecasts for today, April 19, for the Bay Area and Southern California. Both forecasts call for strong wind as a combo of the North Pacific High’s surface NW winds and a strong pressure gradient to the Great Basin bring strong winds to the coast.

But both forecasts have nagging copouts (in green) to cover my rear. Let’s first look at those winds and then why I need some wiggle room in the forecasts.

First note the North Pacific High west of California and check out the clockwise winds spiraling out of the high. Notice how the NPH is a bit

enlongated towards the Pacific Northwest. We will come back to that. Now notice the strong NW winds from the NPH along much of the California coast. Next find the low pressure in the Great Basin. See how the winds spiral into the low pressure in a counter-clockwise fashion.

Following the streamlines you can see how having the low pressure in the Great Basin adds a bit of extra velocity to the winds hitting the Bay Area, Central California coast and Southern California. And this low pressure also speeds up the winds just aloft which also impacts the surface wind a bit. All in all a classic strong wind day for the California coast.

So why the copout in both forecasts? Notice how the isobars of the NPH lean into far Northern California. Tomorrow that lean turns into a surface ridge from the NPH. This creates a N. to S. pressure gradient over the interior of California. Which in turn promotes weak NNW to NNE winds inland from the coast both at the surface and just aloft. And for both Southern California and the Bay Area that can delay and weaken the wind. AND, there is a slight chance that this process could start late this afternoon and spoil my forecasts!