The short answer is in the image below.

Longer answer: Swell size and period and steepness vs. chop is related to: 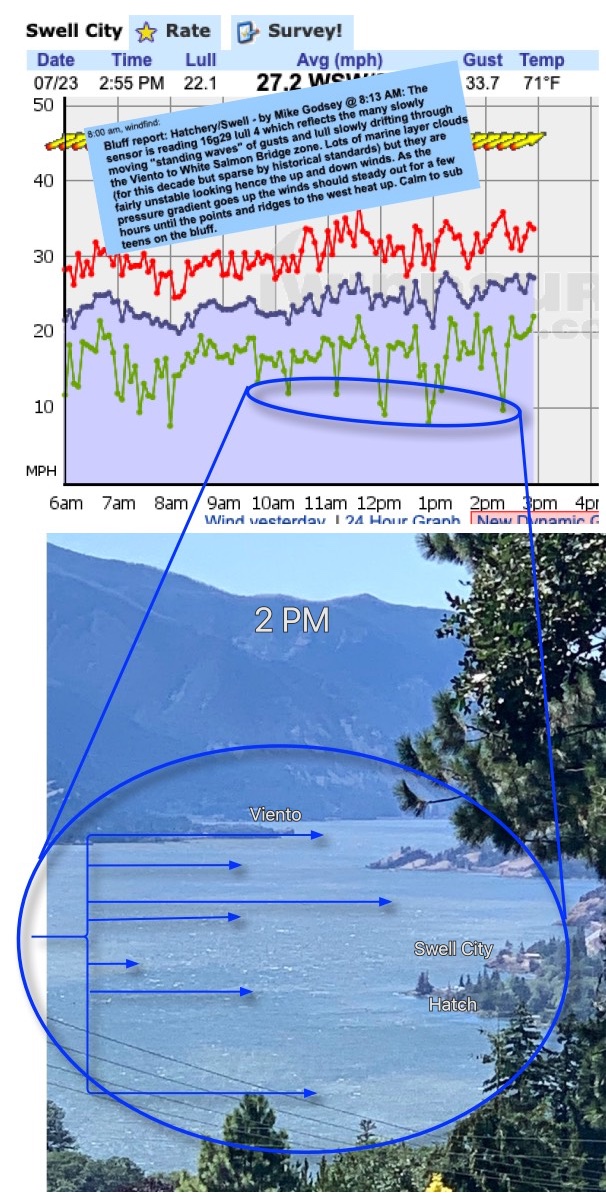 So for huge smooth swell, you want strong, steady wind blowing on a straight section of river with a moderate current and deep enough water that bottom friction does not produce chop.

Looking at the image below you can see a bunch of gust/lull bands slowly passing through the Hatch and Swell zone at 2PM. Such bands can ruin conditions 1, 2 and 3 above. When there are many such bands the result is mixed period chop and swell intermingled with the occasional nice smooth swell.

(My Bluff report always menitons if there bands in the AM and I try to issue a report when they disappear later in the morning. Looking at the wind graph you can see the lulls I mention at 8:13 AM)

Why is this band issue becoming more common?

1. The corridor has always a few such bands due to the mechanical turbulence induce by the points and ridges that protrude into the river. As the wind hits those points it forms wind oscillations that hit and lift from the water making those slow-moving wind bands. These bands can form at any time but are most often are a factor until mid-morning.

But dense heavy marine air tends to flow relatively smoothly over those points and ridges which reduces band formation which steadies out the wind allowing good swell formation.

Unfortunately, the average depth and inland intrusion of the marine layer clouds has been decreasing in recent decades. Hence more bands and sometimes low swell quality as well as the decline in the famed “Dawn Patrol” winds.

So those same points and ridges west of the Hatch are exposed to more sun and as they heat hot air rises creating thermal turbulence in the west wind. This also creates bands of lulls and gusts disrupting swell formation. These bands mostly form in the afternoon making for up and downwind and poorer swell.

Often there is a sweet time midday when there are no bands.

Incidentally, when the winds are really strong they wipe out these bands and we have big swell and gusty winds.

Why is the swell and wind usually higher quality out east? Way fewer points and ridges to create turbulence plus longer fetch.