Spring on the west coast is usually fairly predictable even on the large scale. In March the North Pacific High’s average size increases and it moves closer to Baja Norte and wave folks migrate to fables Punta San Carlos and the endless wave.

On the California coast, spring means mild winds and gentle weather. Then in April and May random storms hits, passes, then departs. And as the rain ends, clouds thin and North Pacific High’s surface NW winds clearing winds rake the coast.

This pattern first happens on the Southern California coast, then the Central California coast and then the San Francisco Bay coast. Finally, in mid-May and June, the North Pacific High largely abandons California and settles west of the Gorge where it becomes a major part of the summer wind machine.

This spring has been radically different. For most of the season, there have been strong unending NW winds on the California coast while the Gorge has had frequent cloudy showery days. And La Ventana in Baja Sur had an epic winter season with much of its wind coming from the North Pacific High rather than the 4 corners high pressure.

So, what is going on with our wind and weather? 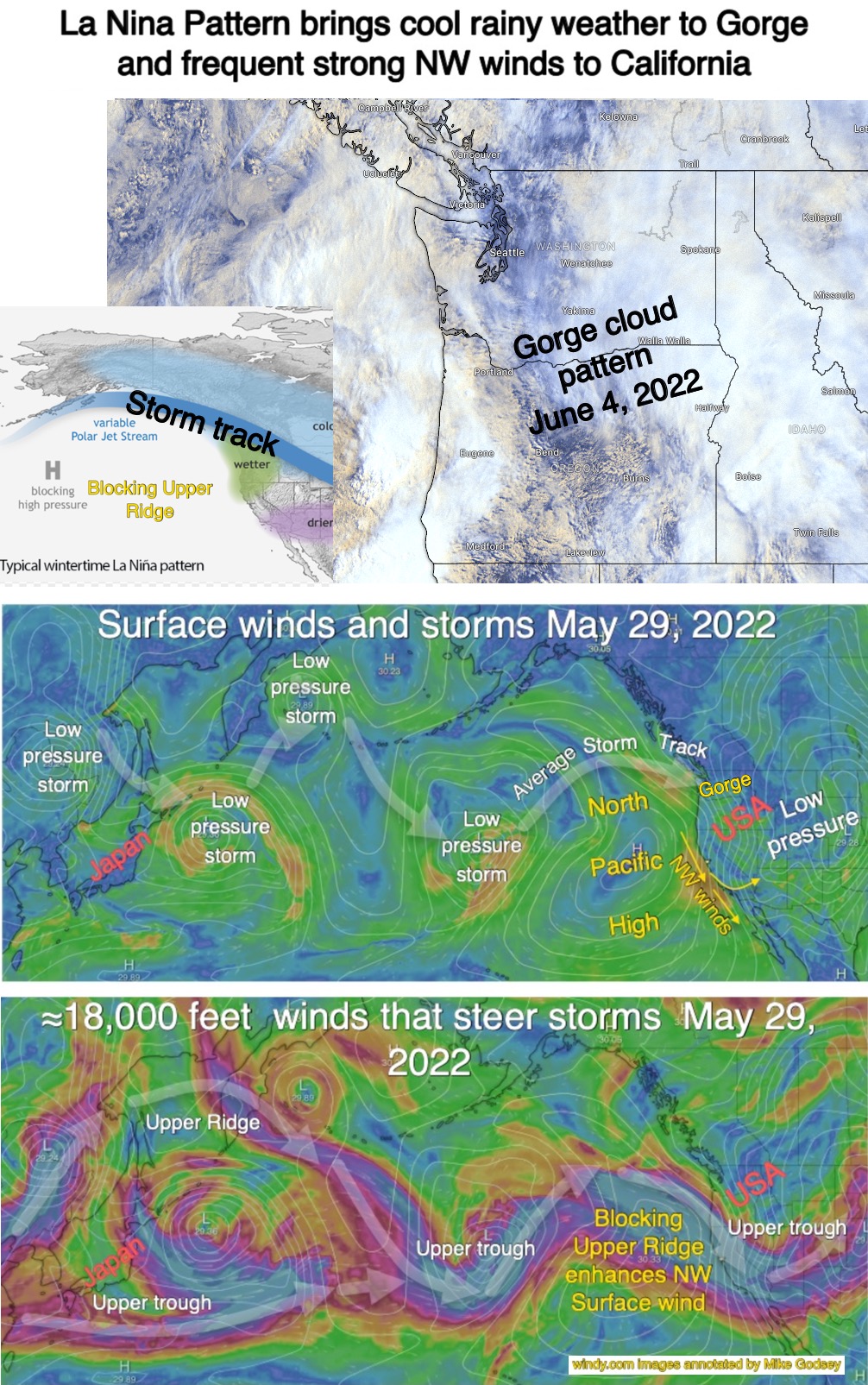 Basically, we seem to be going into an unprecedented 3rd. year of a La Nina pattern. La Nina patterns are highly variable but one common feature for the west coast is a “blocking” upper-level ridge. Upper-level ridges and troughs are waves in the winds from about 18,000 feet and above. The northward extending waves are called ridges while the southward waves are called troughs. Normally these waves travel meander around the globe from west to east in a fairly predictable fashion. And this movement steers and enhances the surface storms and high-pressure areas that make our weather.

But, in a La Nina pattern, it is common for a huge upper ridge to become quasistationary of the USA’s western coast.
This does several things. 1. It steers storms inbound from the west away from California and towards the Pacific Northwest so the Gorge has a very rainy cool spring while California is very dry. 2. The upper ridge tends to hold the surface North Pacific High in a position near California so it does not move away after a passing storm so NW ocean winds are more common. 3. This also means that the Gorge is often deprived of the high pressure that helps power the wind.

So with this background, you are set to study this complex infographic which tells the story in pictures.