Simple answer… This season we have often had:

1. El Nino conditions that make it more likely that part of the North Pacific High will be pushed into far Northern California creating NNW ocean winds so eddies become more likely. Eddy induced southerly winds “push” through the gaps in the coast range rather than being “pulled” smoothly by the pressure gradient to the Central Valley. These pushed winds are less stable and interact more with topography and become turbulent hence gusts. Have you noticed that during eddy winds you often do not see the smooth “fogfalls” of fog flowing like water over the Marin Headlands like we see most summers?

2. The North Pacific High has been severely disrupted by the El Nino so it has elongated south and especially way north even into the Gulf of Alaska. Normally the NPH is centered west of the Gorge by June but this season part of it is still very near the Bay Area. So in recent days, we have seen our typical WSW surface winds but ALSO strong NW wind just aloft. This also creates turbulence and wind shifts. Hence gusts and sudden fades.

3. El Nino also means a more southerly storm track. So many areas in California had more rain and snow this winter. But this also means that we are seeing a more southerly track of low-pressure system this summer. This brings unstable air over the west coast. Unstable air does not hug the terrain and lifts from the surface easily. So gusty winds.

All this means some sites often have been very gusty.

For details see an upcoming blog.

The image below shows how the NPH is unusually far North and the weird location of a small low pressure. Plus, see that huge storm west of the Aleutian islands? You will probably be hearing more about this storm as it swings far more south this El Nino year. 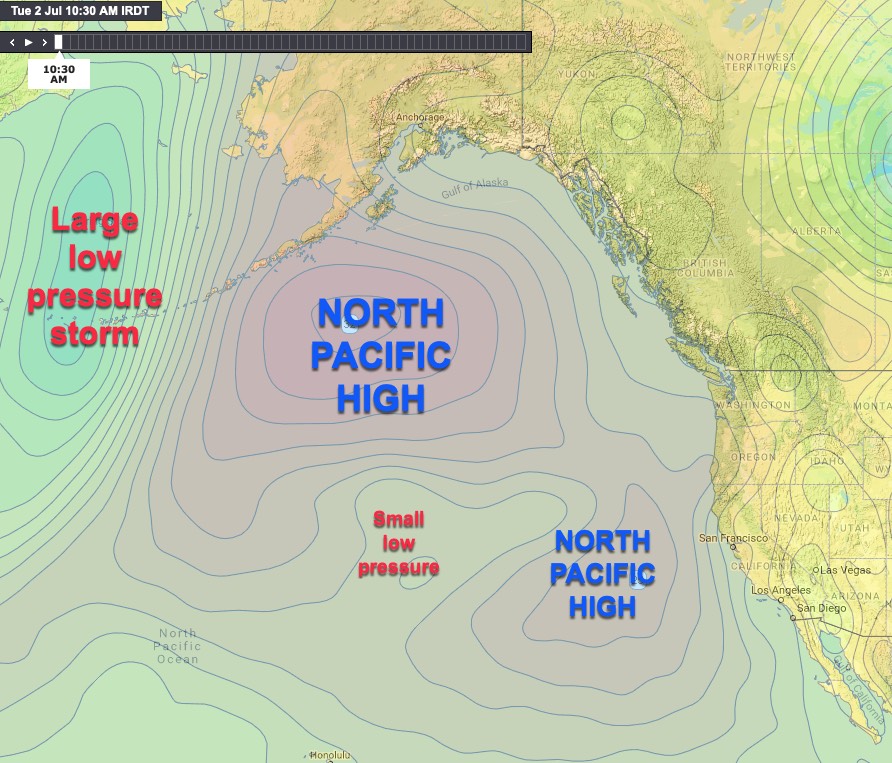