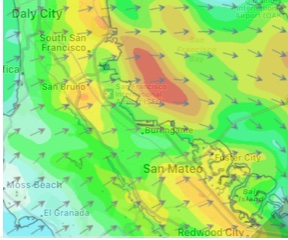 The first is quite common – a patch of high wind at SFO or just downwind. 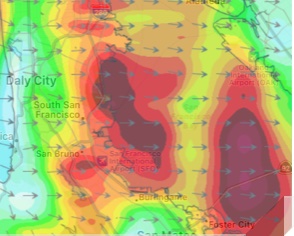 I understand that the San Bruno gap focuses the wind laterally, but going up and downwind, why does it peak in such a small region?

And if it’s so windy there, doesn’t conservation of mass say it needs to be that windy up and downwind?

The next on below is more unusual – two big blobs of high wind. WTF?

Are we getting a 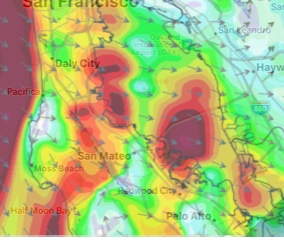 standing wave effect downstream of the 500 foot rise in the gap ?

The next one is zoomed out and later – now there are three areas downstream of SFO.”

Hi Ken, Good to hear from you. The San Bruno Gap only smoothly funnels NW winds.
In the AM and early afternoon today the wind is SW to WSW so it is hitting the sides of the gap.

Normally this is not a major issue since the air is stable ie. cool and dense with an inversion above it. That means the wind hugs the topography. But not today… 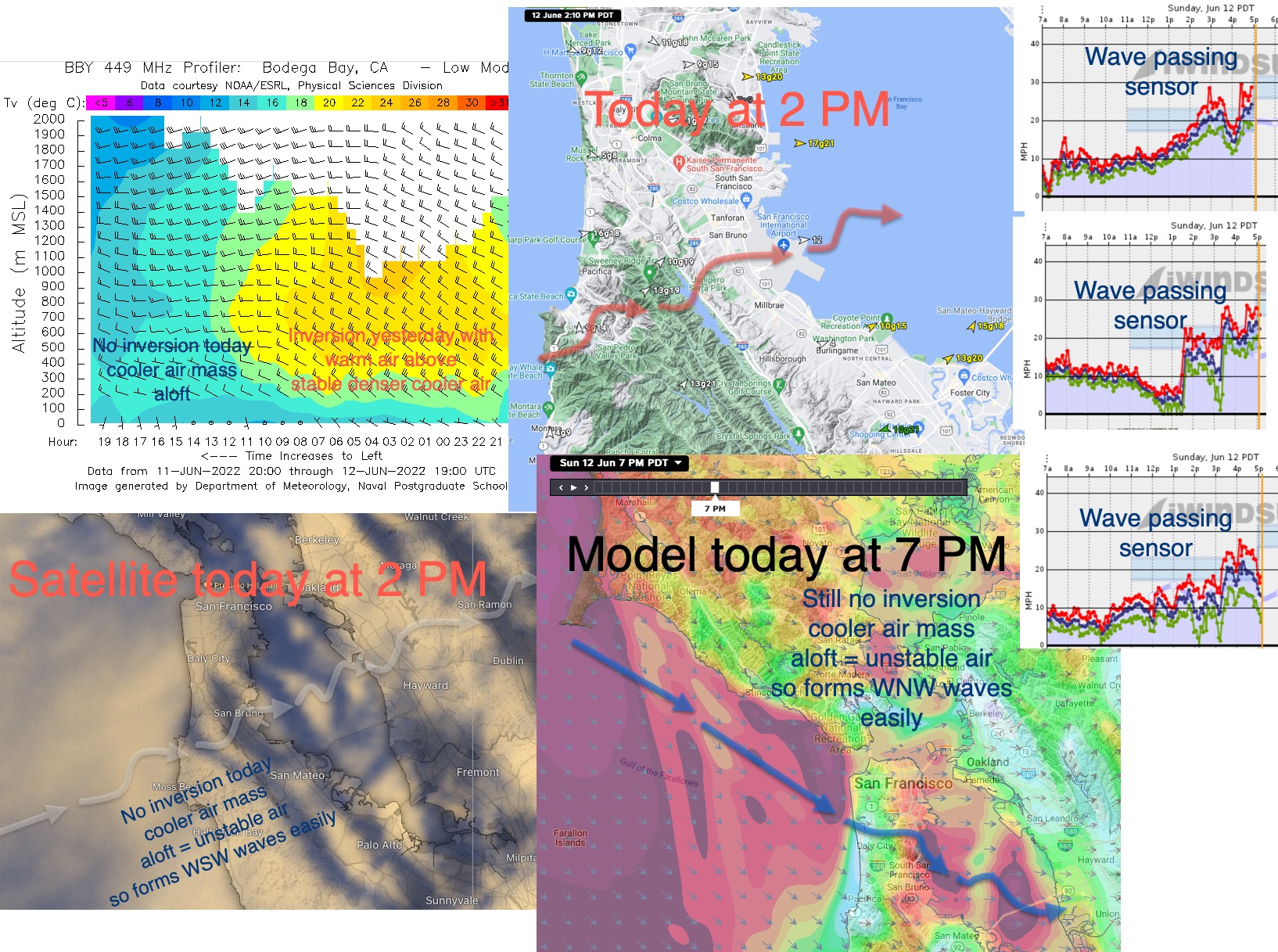 In the Bodega profiler image you can see this was true yesterday. But today the nearby storm has brought in a cooler air mass aloft so we have unstable air.

When unstable air hits the hills near the gap it becomes turbulent and form waves downwind. As this air rises it cools moisture condenses and clouds form. When it warms that moisture evaporates and the cloud dissipates. This gives us the wave clouds you see in the satellite imagery over the Bay Area this afternoon. As the waves descend you also see surface wind gusts if they reach the surface.
Later this afternoon the North Pacific High’s surface NW winds reach the Peninsula. Since the dominant pressure gradient near the gap is towards Stockton the wind is a bit WNW so it hits the coast range. Since the air is still unstable it again forms waves and since this is a surface wind the slowly moving standing waves give you strong wind zones downwind of the gap. As you know turbulence is impossible to perfectly model so at best the maps are approximations.
If you look at the white cap pattern in the image below from the 3rd. Ave. cam you can see hints of these waves
Take care,
Mike 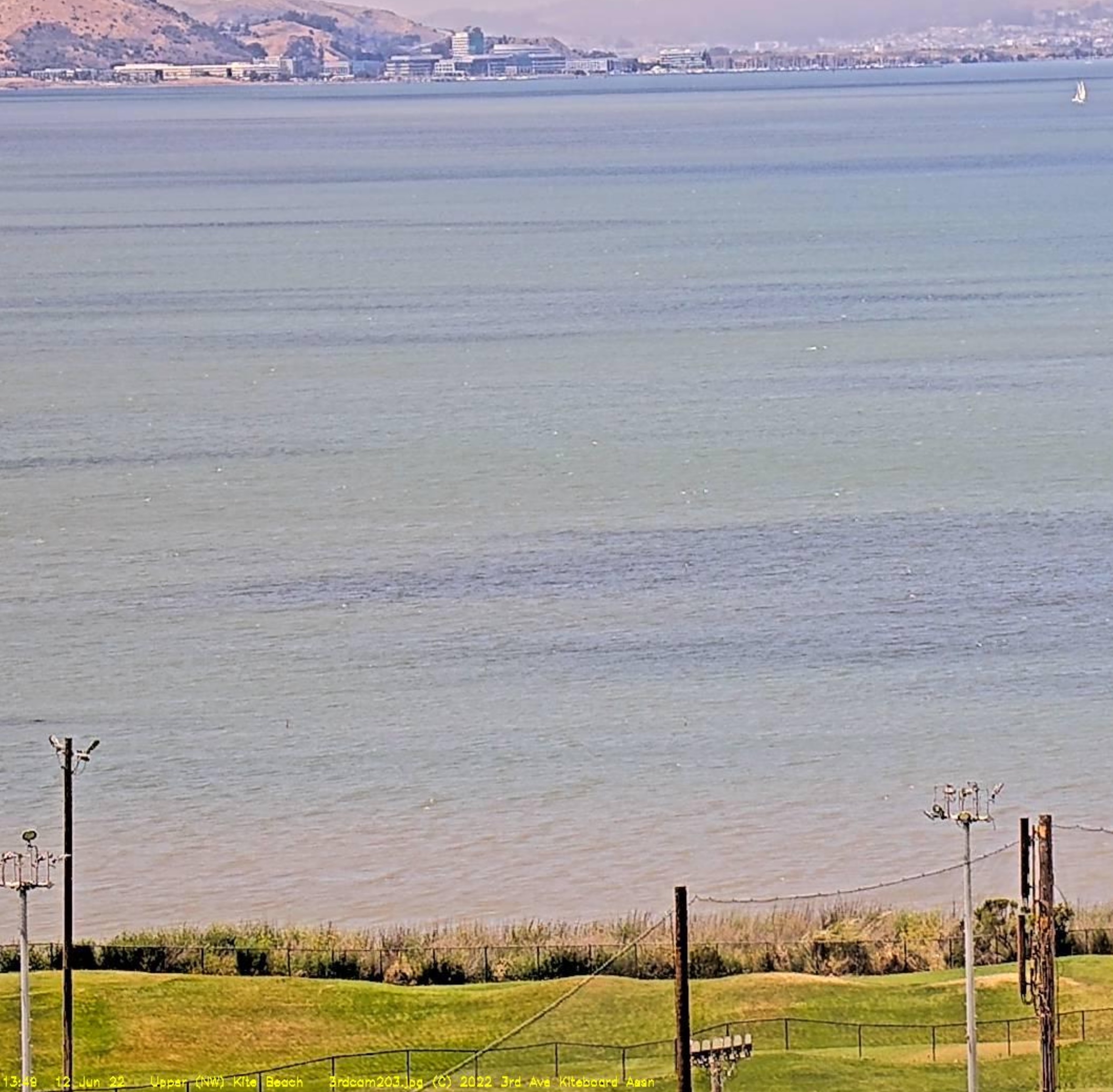