West Coast Wind Blog: Despite some waffling about the eddy sticking to my forecast paid off.

Blog.WeatherFlow.com > California & Baja > West Coast Wind Blog: Despite some waffling about the eddy sticking to my forecast paid off.
By Mike Godsey

All you have to do is watch a dust devil or try to track a tornado and you figure out fast predicting the fate of a spinning body of air is very tricky. And such a prediction was my task today in forecasting the winds for the San Francisco Bay Area.

If the eddy endured all day only a few sites in the north tower of the Golden Gate to Point Blunt to Pt. Isabel would blow while other sites and the coast would only have weak southerly wind.

If the eddy died then almost every site in the Bay would blow including the coast would have strong winds.

The night before I had forecast a small eddy fast dying eddy just west of the Golden Gate to Stinson Beach in Marin County. But the shorter days in August meant that at my 7:30 AM forecast the satellite imagery was way too dark for me to see the size of the eddy. So my forecast said:

“The North Pacific High’s NW ocean winds are already in the mid to upper teens at our ocean buoys and Central Valley low has already retreated from the coast. So I expect the eddy to be wiped out by noon. Then with the pressure gradient to the Central Valley is pretty evenly split between Sacramento, Stockton and towards Bakersfield so almost every site in the Bay Area sees strong wind. “

Unfortunately, by 10 AM the satellite imagery revealed that the eddy was actually growing and had expanded from hub to near Pt. Reyes. At this point I began to have second thoughts about the accuracy of my forecast. If the eddy did not die it would spoil the coast NW winds and make some sites unreliable. So, I issued the following update:

“Special Update Issued at: 8/6 10:20 AM by Mike: I am getting a bit worried about my forecast. The eddy which was supposed to be torn apart by building NW winds is actually growing larger and its southerly coast winds now extend from Half Moon Bay to past Bodega. This means I may be changing my next forecast to favor the East Bay and to downgrade the Peninsula winds. Stay tuned.”

However, by the time I started the 11:30 update I was feeling more confident. The NNW winds aloft that helped product the eddy were fading and I could see that the North Pacific High’s NW winds were tearing at the eddies western border causing the eddy to shrink and move towards the coast where the terrain would destroy its counter-clockwise spin. So my 11:30 forecast said:

Now at 11:30 AM: As noted in the Special Update the eddy is still very visible in the satellite imagery. Since the update the eddy shrunk and now expect it to be shredded by the North Pacific High’s NW winds in the next 2 hours. At that point the NW winds will curve into the Bay Area hitting most sites. We have Bodega and Año Nuevo clearing so Waddell is looking good. Bodega is promising but has yet to ramp up. Unfortunately, I am still seeing a bit of NNE winds just aloft that will probably make Pt. Isabel and Berkeley FADE INSIDE around 4 PM. 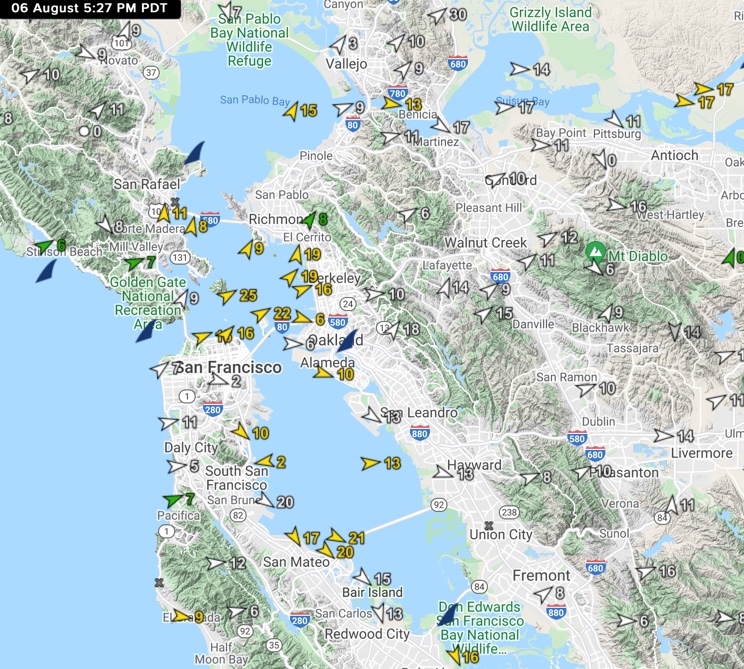 Looking at the second satellite animation you can see my prediction about the eddy was correct. Watch as the North Pacific High’s NW winds first shred the eddies western border and then push the entire eddy into the coast where friction from the terrain quickly destroyed its counter-clockwise spin.

This allowed the NW ocean wind to curve through every gap in the coast range heading towards Sacramento, Stockton and towards Bakersfield which brought SSE winds to Larkspur, W winds to Sherman Island, SW winds to Pt. Isabel, WNW winds to 3rd. Ave. NNW winds to Palo Alto etc.

In short a near-perfect forecast as you can see in the wind map of the Bay Area at 5:27 PM today.

Every once in a while sticking to your guns pays off.