West Coast Wind Blog: Dissection of how the Gorge wind goes from MILD to WILD.

Compare Crysta’s iwindsurf.com forecast for Wednesday and Thursday. How can conditions change from limp winds to upper 20’s   overnight? 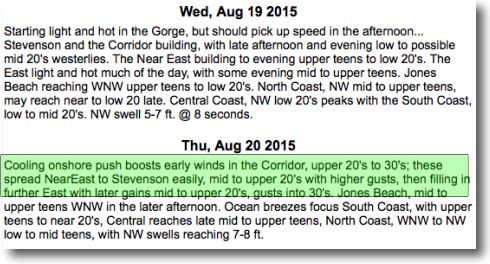 First let’s review what is causing the current limp winds by looking at the imagery in my last blog. The heat producing ridge you see in that imagery has been heating up the Gorge, weakening the pressure gradient and crushing the marine layer clouds hence the weak winds.

But over the pacific at ≈ 18,000 ft. feet an upper trough is moving towards the Pacific Northwest and should come over us Wednesday night and Thursday. Think of an upper troughs as southward extending loop in the upper level winds. The air within this loop of is cooler and at lower pressure than in an upper ridge. In this case the loop is an especially tight loop spanning only a few hundred miles.

Thursday as inbound shortwave at ≈ 18,000 ft.comes over us several things

1. The wind flow at the leading edge of the shortwave spreads out or diverges creating lower pressure at ≈ 18,000 ft. that intensifies the surface low pressure in the Columbia Basin. So the pressure gradient suddenly goes up  which enhances the wind.

2. As the shortwave bumps the heat producing upper ridge eastward we begin to receive cooler air. And as the coast cools the air becomes denser creating high pressure. This further enhances the pressure gradient between the coast and the Basin.

3. In recent days the upper ridge has been compressing the marine layer cloud and as the upper shortwave comes over the coast the inversion lifts so the marine layer deepen and move from the coast over Portland and into the western Gorge. This mass of cooler denser marine air further enhances the pressure gradient and since it is heavier air

it tends to flow like molasses and sticks better to the water so the winds will be somewhat steadier than if there was no marine layer presence.

4. As the strong winds of the shortwave come over us they hit the mountains of the Cascades. This creates waves in the upper level wind that sometimes transfer momentum to the surface pressure gradient winds. This adds a big GUST factor which is somewhat moderated by the marine layer clouds. If conditions are just right you will sometimes see these waves as wave like patterns in the cloud out east.

The video above will allow you to visualize some of these processes.