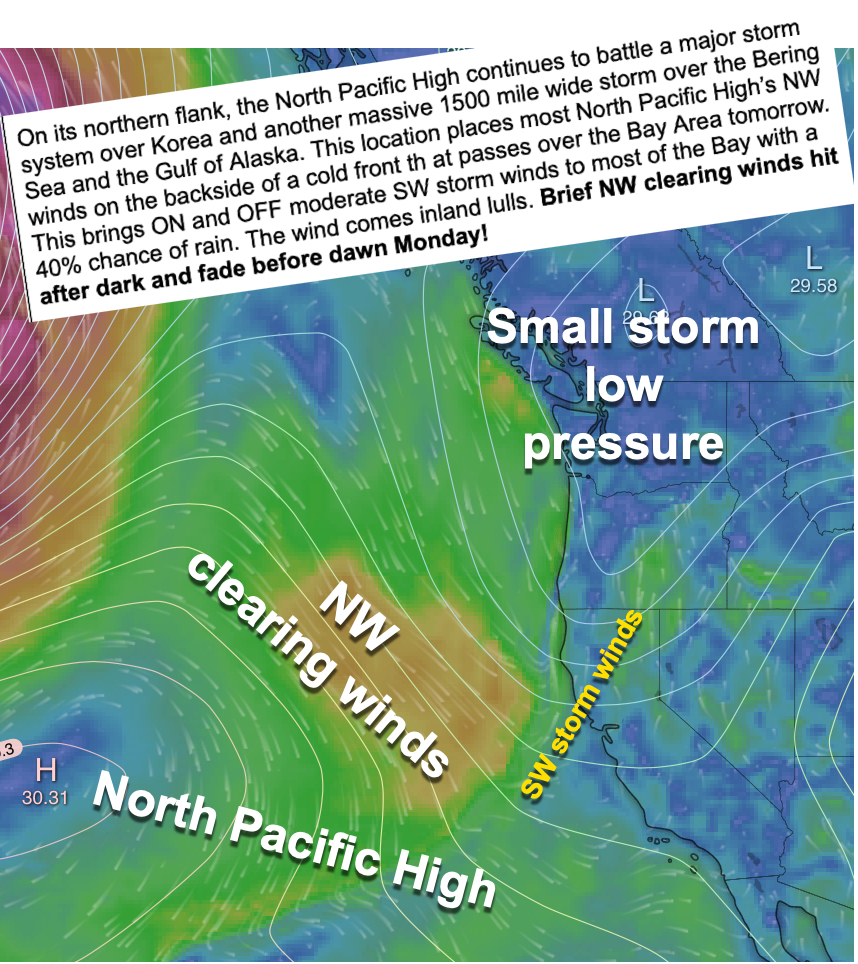 Looking at today forecast the two sections that stand out are “ON and Off SW storm winds” and “Brief NW clearing winds hit after dark and fade before dawn Monday!”

Let’s dissect each of those statements starting off when the disappointing lack of NW clearing winds Monday, Oct. 18 as the rain and clouds pass.

Looking at the first image notice the small storm over the Pacific Northwest. Now looking NW of the San Francisco Bay Area notice the sharp transition between SW wind and NW winds.

This area is where a somewhat rainy cold front is located. The SW storm wind are currently randomly hitting the Bay Area. Those NW winds you see behind the cold front are often called NW clearing winds since the North Pacific High producing those winds usually suppresses clouds.

Note the orange color showing that these NW winds are very strong and they seem headed towards the Bay Area. However, most of the NW wind will happen tonight and by Monday that NW wind will be tapering off. Why?

Look at the far NW corner of the image. Those very strong SW winds in red are associated with the next much larger storm system. And that system is modeled to push the North Pacific High and its NW winds south of the Bay Area Monday. This deprives us of the NW clearing winds we expect in a Spring scenario.

Now let’s talk about those “ON and Off SW storm winds”.  We in the Bay Area are spoiled by the summer-type thermal winds that are usually very steady.

If you have ever sailed/kited/winged the Gorge you know that the winds there are typically wildly gusty. But here in the Bay Area, our winds funnel in from the chilly Pacific Ocean. So the air is foggy, cool, dense and when it hits terrain like the Coast Range it flows up the hills and then flows steadily down the hills. So it is quite steady.

Whereas in the Gorge the wind flows for over 100 miles of land so it is heated and is relatively warm.  So when it hits terrain it lifts, becomes turbulent and takes a while to move back to the surface.

The same is true of stormwind. Since the air does not hug the surface of the ocean it is not as cool compared to the air over the land. So when it hits the Coast Range it lifts and then ripples back down to the surface some distance downwind.

You can see the wave-like pattern of strong SW storm wind in this next model animation.

Your best bet in such conditions is to pick a launch site that does not have much terrain to the SW so the turbulence is less of a factor. For example Half Moon Bay, Sherman Island or Doran at Bodega Bay.