As you all know the location, thickness and movement of the marine layer clouds are critical in making the winds at every
site in the San Francisco Bay Area. The same is true in forecasting. The difference is that we have to try to forecast where the clouds will be many hours in advance so people who have jobs can plan their day in advance. 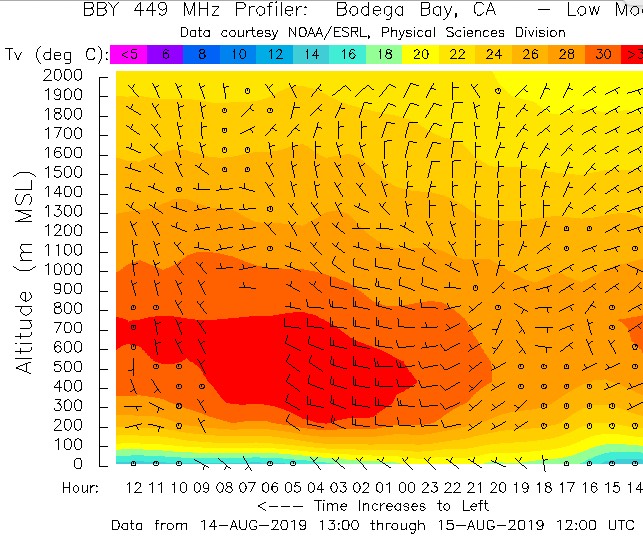 And these days a counter-clockwise spinning eddy makes forecasting the clouds and winds far more difficult than in past years. But still, we can usually use a combo of model output, sensor data and satellite imagery to localize the eddy. But for an accurate forecast of the afternoon winds we need to be able to actually see the size, location of the eddy to determine whether it is going to die or endure. Since if it endures sites like Pt. Isabel will rock while the 3rd. launch becomes unreliable or worse.

If you have lived in the Bay Area for decades you will remember that heatwaves used to occur mostly in Sept. and Oct. As you have noticed from the forecast discussions and the TV news it is upper trough and ridges that bring cooling and warming respectively.

But a changing climate has these upper troughs and ridges up at ≈ 18,000 ft. making greater excursions towards the north pole and towards the equator. This means we sometimes have colder winters and sometimes hotter summers with the latter being more common.

So how does this make forecasting eddies more difficult? Upper ridges are areas of descending air that compresses near the surface producing heating. This same subsidence lowers the inversion and

Check out this first image above from the Bodega profiler today. Notice the very hot air, in red, above the very thin cool air, in blue, which has had its moisture evaporated hence not visible clouds.

This means the swirl in the marine layer clouds created by the eddy does exist so the eddy is invisible.

This issue began to appear Tuesday Aug. 13 for Kerry. At dawn there was only a trace of clouds making it difficult to see the eddy. And today I am forecasting an eddy that visually is invisible

Look at the first frame of this animation and notice how you can not tell there is an eddy. Only after the 7:30 AM forecast can you clearly see and eddy. This situation with invisible eddies will be an increasing problem in the future. And already forecasting how eddies impact specific sites, especially 3rd. Ave. inside is a nightmare.