You may have noticed that the wind and weather has gone a bit bonkers at times this year for much of the west coast. You’re not wrong – the data backs up your impression. And, no, it is not Global Weirding, at least not directly.

This year the Gorge had a very mild winter that had daffodil bulbs budding in late February and then had snow on the ground for almost a month in March. Then it had a crazy long May heatwave. Then unending mid 30’s wind in June. And then a long period of weird clouds and sporadic wind in July.

All this while, in the San Francisco Bay Area, there’ve been long periods of eddies and southerly winds along the Bay Area coast with the beloved NW winds of the North Pacific High AWOL.

So what is behind all this Gorge and San Francisco weirdness? Basically, the direct cause is the atypical shape, size and location of the North Pacific High. And that, in turn, was impacted by:

Let’s look at the North Pacific High this year versus the past decades. 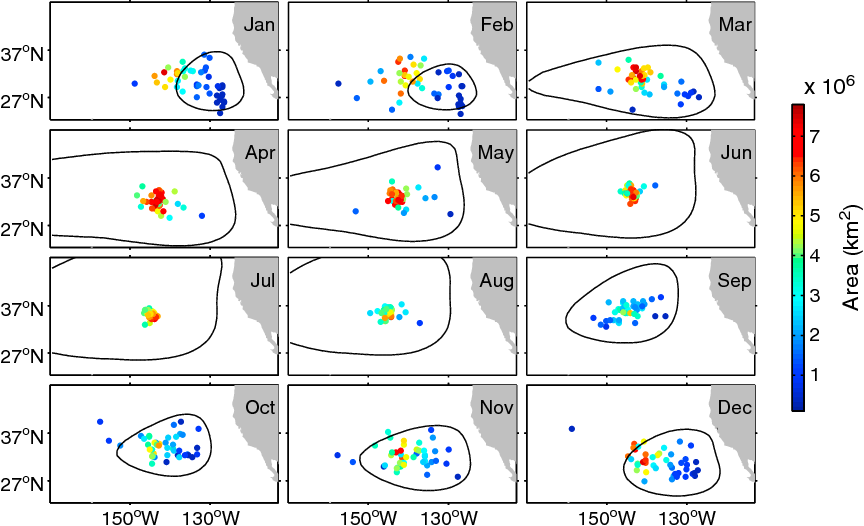 Notice how the North Pacific High is a small oval and way to the south during the winter.

Then, starting in March, the oval NPH expands and is
centered west of Baja. This is why the winds at the Punta San Carlos wave sailing mecca begin to build in March.

Then, as Spring turns to Summer, the NPH’s average location moves northward. In May, for example, it’s typically centered west of Southern California, which turns winds NW along the Central and Southern coasts.

Then the NPH centers off of the San Francisco Bay Area and the NW winds peak after each passing storm. In July, it centers west of the Gorge where it works with the low pressure in the Columbia Basin to make the Gorge winds blow very reliably, especially in the Corridor.

Remember these are average locations and each time an upper trough/surface low pressure passes to the north the NPH moves southward. 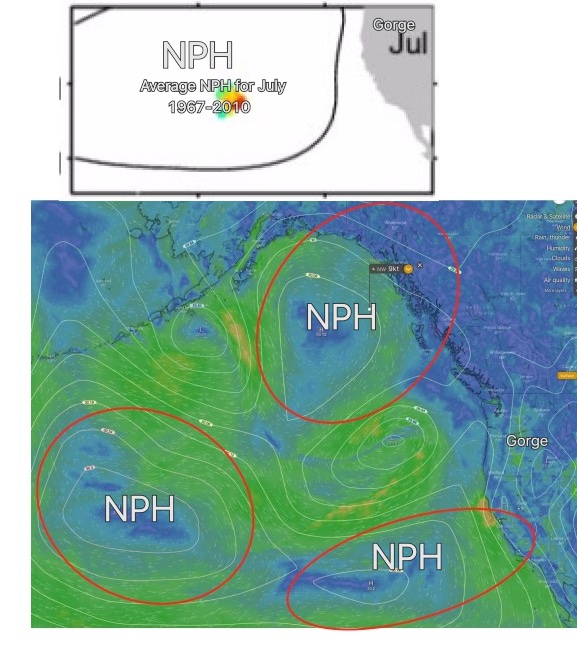 Now looking at the second image compare the July Average North Pacific High and compare it to today Thursday, Aug. 1, 2019. Wow, quite a variation from the norm!

Clearly, the North Pacific High is much larger and fragmented by all the low-pressure systems following a southerly storm track. Especially note how the NPH has been bumped away from the Gorge.

Every few years, the El Nino-Southern Oscillation – a warming of tropical Pacific sea-surface temperatures linked to a slowing or even reversal of the normally easterly trade winds – begins.

El Nino is tied to a host of changes to the normal climate of the west coast. If you live in California you know that a strong El Nino brought more rain than normal to California this winter.

However, El Nino’s effects in the summer are not as well understood, but, this year, we are seeing some strange ones.

That is why the forecast has sometimes noted that the NPH stretched up to the Gulf of Alaska or even over Alaska itself.

This last graphic shows what the North Pacific looked like in late July. This image shows all the major players in the weird wind pattern we have often seen this spring and summer.

So what does the future hold for the Gorge windwise?  The El-Nino will subside soon and the PDO will gradually move towards a cooling phase. However all evidence suggests that El-Ninos are getting stronger in recent decades. Plus the overall warming of the Arctic is going to be an issue. Even in a cool PDO, a warm arctic may mean we struggle to get the deep marine layer influences we once did, as coastal waters may be just warm enough to make it difficult to keep those marine air masses stable. 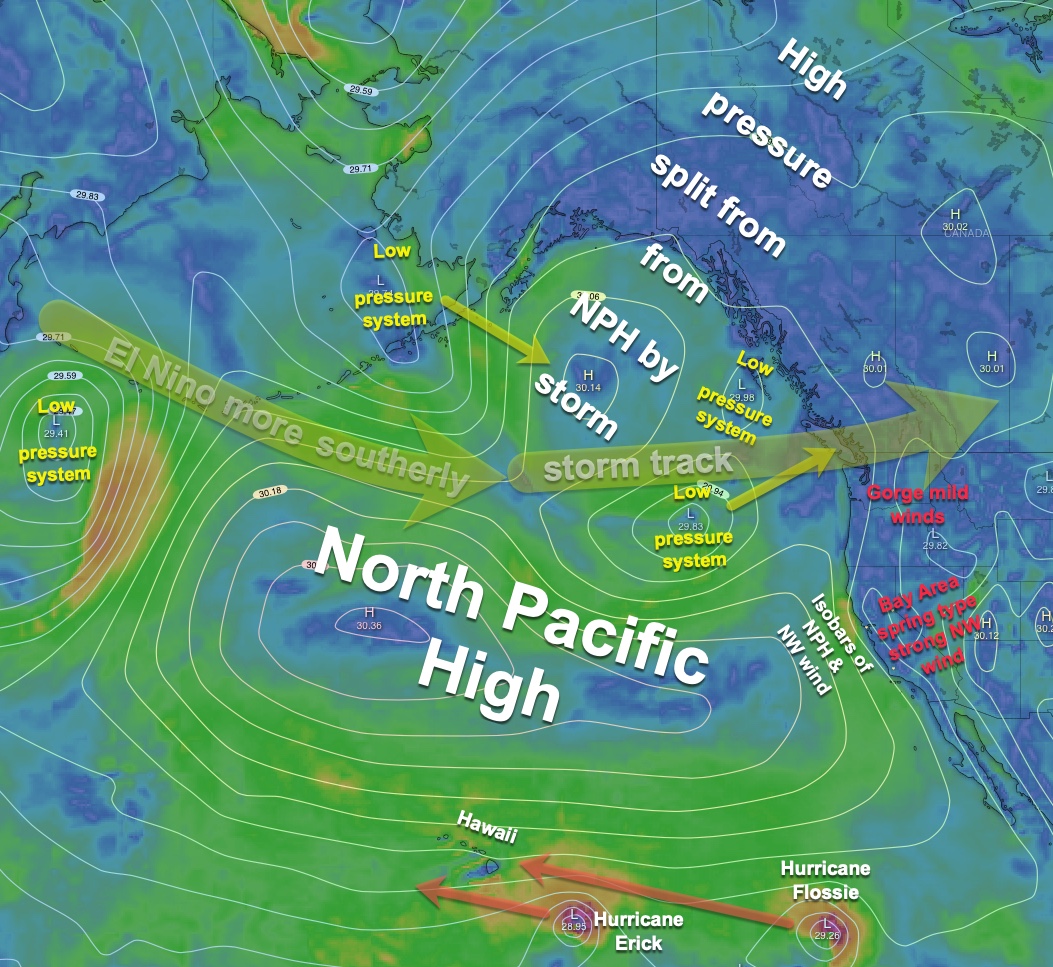