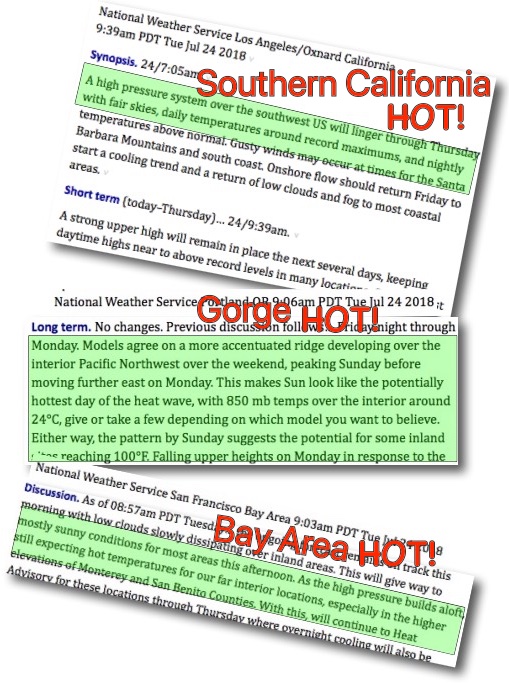 Take  a look at these NWS technical discussions for the coming days for the Southern California, The Gorge and the San Francisco Bay Area.

All three mention high pressure as the cause of the continued and building heat.

Sometimes it is confusing when the term high pressure is used in the context of weak wind heat waves. Since kiters and windsurfers at all three venues know that the high pressure known as the North Pacific High is a major factor in west coast spring and summer winds.

So how can high pressure also weaken wind and bring on a  heat wave?

Meteorologists are often to blame since the sometimes just talk about high pressure or a ridge without making it clear if they are talking about a surface event or an event far aloft. You can see that confusing use of terminology in all three of the excerpts above.

The animation starts with Surface winds showing the isobars of surface high and low pressure.

Note the North Pacific High and its’s N. winds on the Oregon coast and it’s NW winds on the California coast.

Having low pressure close or over the coast spoils the pressure gradient.

So where does all this low pressure come from and why is it bulging out over the Gorge and Southern California and close to the Bay Area? The second part of the animation shows the wind circulating around huge area of high pressure at ≈ 18,000 ft.

over the entire western USA

This upper high pressure zone is  an area of subsiding air. And as this air descends it does several things:

1. It compresses and heats the air just aloft and at the surface.

2. This, in turn, creates the surface low pressure you see in the isobars of the interior.

3. As the upper high pressure enlarges the surface low pressure get bigger and expand towards or over the coast spoiling the pressure gradient so the winds weaken.

4. In this imagery from today July 24 at 1:30PM, you can see that this subsiding air also compresses the marine layer so the fog layer may be crushed to:

A. A thin dense fog only along the coast like you see in the Bodega profiler image and the cam image looking towards downtown San Francisco.

B . Or it may even not be visible. (like you see in the LAX profiler image

C. Or it may be crushed so much that only it can only form far from the sailing or kiting sites like you seen in the satellite imagery from the Gorge and Southern California.

Notice how Pismo Beach still has marine layer clouds nearby.

D. Or if there is a very narrow gap in the coast range near the ocean the marine layer may still move a short way inland like you see in the Bay Area satellite image and the previous photos.

And the Bay Area is one of the few sites that can still be windy in some heatwaves. But if the low pressure moves to the coast then only a few sites a few miles from the ocean will blow.

5. The descending air also compacts natural and human-made particulates closer to the coast so brownish have and pollution levels are more apparent.

If you have lived in any of these locales long enough you have noticed that such heat waves are occurring earlier in the season, last longer, and are more frequent and often more intense.

And this is often making Gorge, Bay Area and Southern California winds briefer, more up and down and longer weak wind periods.