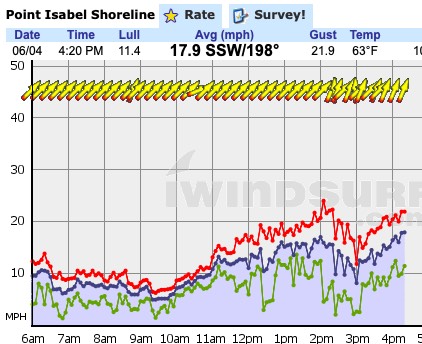 Pt. Isabel has, by far, the most interesting cruising ground for windsurfers and kiters in the Bay Area. Where can you round and island, speed sail in glassy waters, find large rolly swell while watching the Golden Gate and the San Francisco skyline. There is just one downside to Pt. Isabel. There are 3 conditions when the winds can fade very fast leaving you with a long slow or swim to shore.

Here is a quick visual tour of one of those conditions that happen during heatwaves.

Often during a heatwave the Central Valley thermal low or trough expands over the Bay Area during the night. The pressure gradient is strongest near the edge of this thermal trough. And usually, the isobars of the trough retract from the coast to around the East Bay in the afternoon.If there is a marine layer and NW winds this causes SW wind to curve towards Pt. Isabel and the winds pick
up. Then as the Central Valley heats hot air mores over the East Bay hills. If this “heat bubble” expands over the launch area the winds nearshore can fade away even though there are usable winds towards Brooks Island.

Unlike the other Pt. Isabel fades this thermal trough (aka “heat bubble”) fade is usually temporary and as the marine layer pours in through the Golden Gate it pushes the cool air and the isobars of the trough more inland so the pressure gradient goes back up and the winds fill in like you see in this Pt. Isabel wind graph.

In future blogs I will cover the other causes of Pt. Isabel fades.