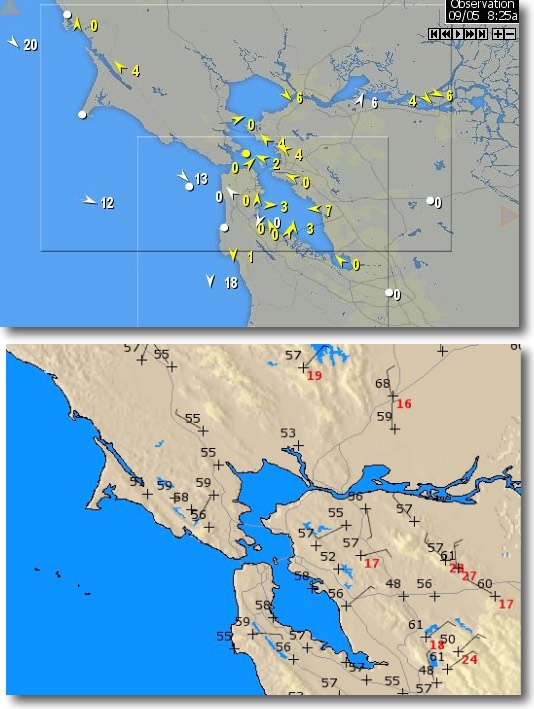 You don’t see much sign of the NNE
winds at the surface
but they impact the wind distribution and strength.

Have you ever noticed that on days when my forecast prattles on about the impact of AM NNE winds on the Bay Area winds you actually don’t see much sign of NNE winds? For example take a look at the wind map from early this morning in the top image.

All you really see NW wind out at the ocean buoys and some NNW wind closer to shore while inside the bay the winds are weak and random. So where is the NNE wind?

The issue is that the NNE wind coming down the Central Valley and over the  ridges is relatively warm air so when it hits the Bay Area ridges it tends to lift and does not come down to the sensor level.

But now look at the 2nd image. Notice the NNE winds hitting some of the ridge tops and hitting the

sensor in the Central Valley where the terrain is very flat.

So if that wind is mostly just aloft how can it impact our surface wind? Well to get useful wind inside the Bay Area this afternoon we need that ocean wind to be sucked though the gaps in the coast range and head towards the Central Valley.

But this NNE wind aloft does several things to delay and weaken that process.

Then in the afternoon the NNE winds typically fade away and the 3 processes above subside somewhat. The problem is that the valley low pressure often does not fully retreat to the Central Valley and hangs near the East Bay. So the pressure gradient is focused between the ocean and sites closer to the coast from Treasure Island westward.

You can see all of this happen in the 2 animations.