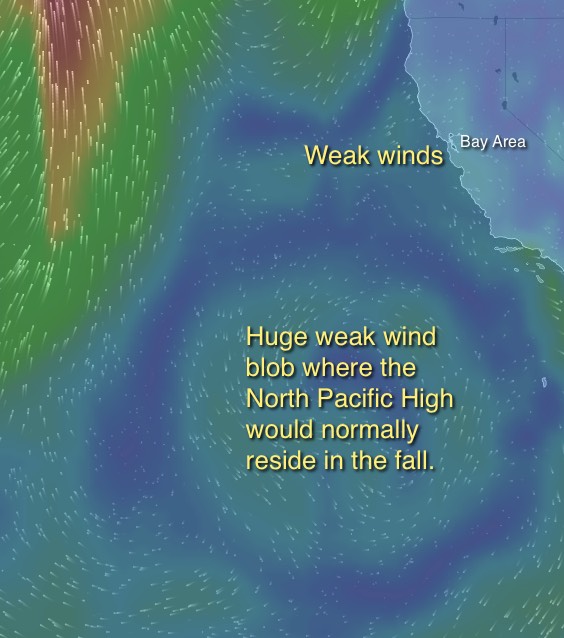 (If all you care about is the coming NW wind skip all this jargon and imagery and scroll down to the bottom animation!)

Considering it is late fall the Bay Area has seen a good number of windy days. This is largely due to the unusually strong North Pacific High in recent weeks. But today and recent days and the next several days only see weak winds.

It is common to have weaker winds in the fall especially east of Treasure Island since the Central Valley is cooler since the angle of the sun is lower and the days are shorter. Which means less heat to create a favorable pressure gradient.

However this weak wind period also has another cause.

The surface North Pacific High and its NW winds have disappeared!

And in its place at the surface is the huge weak wind blob you see in the first image. 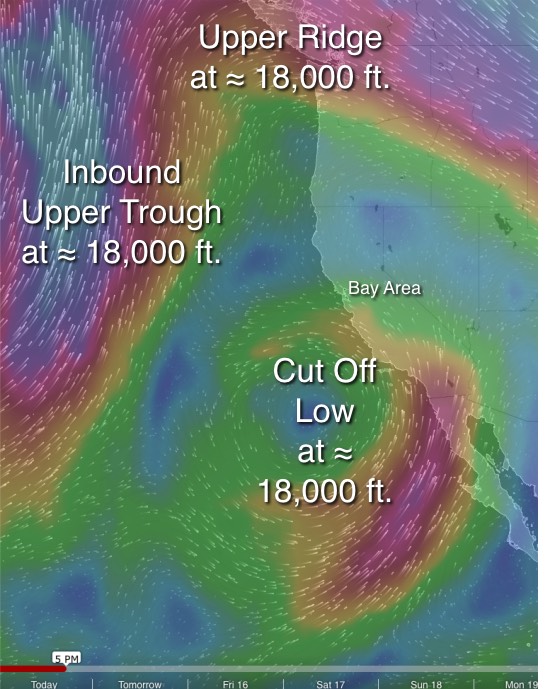 What is causing this weird circular weak wind blob?

Think back to the crazy winds we had over a week ago. Those winds were caused in part by a Cut-Off Low up at ≈ 18,000 ft.

That Cut-Off Low wandered away from us and ended up loitering just west of Baja.

In the last few days the Cut-Off Low has been sliding up the coast of Baja and is now off Southern California. You can see the position of this Cut-Off Low today at 5PM in the 2nd image.

This Cut-Off Low is producing lots of clouds near Southern California and could even produce some showers.

And its strong winds aloft will make the surface local sea breezes up and down.

Notice the northward extending loop in the upper levels winds over the Gorge and California. This is the upper ridge that has been keeping the west coast so warm in recent days.

Looking to the west you can see the strong SW winds of the incoming upper trough that will  bring a cool down.

This upper trough will also sweep up the Cut-Off Low and carry it eastward away from California.

The Cut-Off Low you see spinning up at ≈ 18,000 ft. in the 3rd image deprives the North Pacific High of the descending wind the creates the high pressure which in turn creates out NW winds.

So why should you care about this happening since all you are doing is looking for strong quality wind?

Well check out the animation below.

Notice at the start of the animation the huge weak wind blob. What is causing that circular blob?

You guessed it… the Cut-Off Low.

Watch in the animation how the weak wind blog fades away as the Cut-Off Low up at ≈ 18,000 ft. drifts away from California.

Then note how a “new” North Pacific High forms about 1000 miles west of the Bay Area.

And you can see its NW winds begin to spiral in a clockwise fashion from the North Pacific High and reaches the Bay Area ocean buoys the weekend.

At the same time the upper trough you see in the 2nd image ejects east ward and the next inbound upper ridge creates strong NW wind on the ridge tops which should add a gust factor this weekend.

I am not expecting epic winds since the pressure gradient to the Central Valley will be weak. But we do have a good chance of at least gusty upper teens to around 20 at sites near the coast.

Of course we are dealing with an unpredictable Cut-Off Low here so I could be wrong about all of this.