West Coast Wind Blog: The inside story and imagery from explosive winds in the Gorge May 31.

Blog.WeatherFlow.com > California & Baja > West Coast Wind Blog: The inside story and imagery from explosive winds in the Gorge May 31.
By Matt Souders 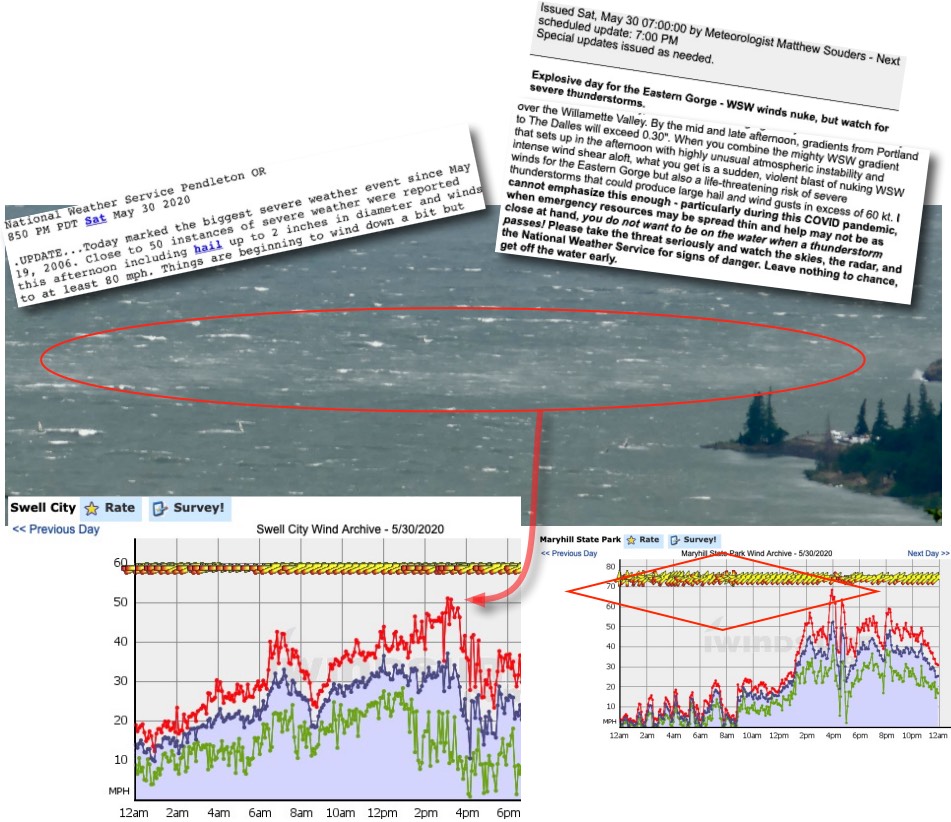 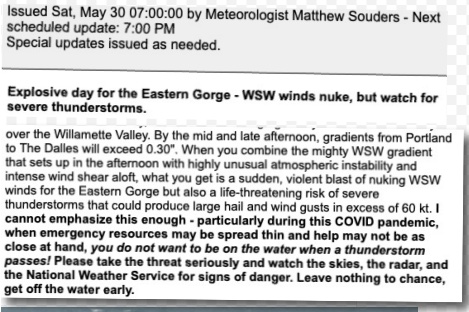 A few days ago I wrote a blog about the strange Cut-Off Low at ≈ 18,000 ft. feet between Hawaii and Baja that was tracking towards San Francisco where it would bring epic winds. Then how the Cut-Off Low would create explosive winds for the Gorge

First – as it moved towards the Columbia Basin it would allow the North Pacific High to move towards us stacking isobars over the Gorge creating a strong pressure gradient.

Second – as the Cut-Off Low would deepen the low pressure in the Basin making for even a stronger pressure gradient.

Third –  Matt Sounders, one of our Weatherflow Gorge forecasters was focusing on the clouds, winds and storm conditions that would arrive at the same time

Image #2 shows the Cut-Off Low at ≈ 18,000 ft. near San Francisco and how it is impacting the Gorge clouds Saturday morning.

All this strongly suggested that we would see explosive winds, lightning, and locally heavy rain and even a chance of large hail at some locations.

The following is imagery and text messages between Mike Godsey & Matt Sounders the day of the storm and its aftermath.

Some of  this is technical but skip to the good parts:

Gusts to 30 knot at my house. Thin hazy clouds overhead. So far the storm bands are W and E of the Gorge. Lots of lightning strikes in just one hour to the E and W. Main body of storm is still to the SSW at the Oregon – California border

IMAGE  Image #3 shows the swell of convective clouds E. and W. of the Gorge and how they missed the corridor in the morning.

#4 shows radar imagery of heavy rain in yellow and orange with lightening strike. Notice how in the morning this action is focused E. and W of the Gorge.)

Look at those overshooting tops casting shadows over the Columbia Basin!
8:41
I see a new convective band is impacting Roosevelt/Arlington

I’ve never been so nervous about a forecast. I was right about things calming back down in the Corridor once the stuff near Stevenson cleared off…thank goodness...

You’ll see a big bloom of thunderstorms (mostly targeting the Cascade peaks and Western Gorge, and from Doug’s east) start popping off between 3 and 5 and hit peak intensity around 6-7.We’re roughly on track for wind speeds out to Maryhill (Arlington dipped a bit, which isn’t a complete shock, but it’ll recover in an hour or two and begin to climb rapidly after 3 or 4, peaking by 6-7). I’m still expecting upper-30’s at The Wall and low-40’s at Roosevelt by the time we peak – the only way I imagine busting is if thunderstorms get too intense and make the gorge flow too turbulent right at the crucial time when winds should be peaking 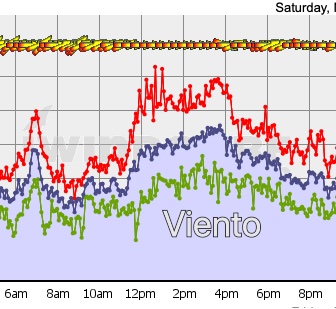 12:44
Looks like it was a good thing I upped my Corridor numbers early this morning…and mentioned a solid period through the early afternoon in my midday update. Really good conditions for a couple-few hours there before instability starts to break things up
12:45
I saw marine clouds reforming west of Viento at 10:45 when I started the update and confirmed my speculation from last night that conditions would stabilize for a few hours

Mostly blue skies here. Solid marine layer to the west. This is one weird storm. There are storm clouds E. and W. of the Corridor. 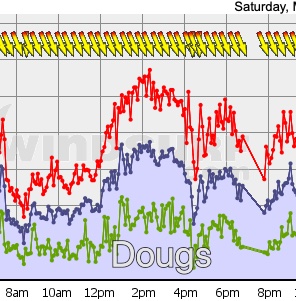 Total white out at Hatchery 3 minutes ago:

winds climbing out east…on schedule there…
3:24
wind quality appears to have imploded right after 1 PM at the Hatchery, if the sensor is to be believed.
3:25
Gust factor increased, lulls dropped…minute to minute averages got more variable.
3:26
wow…look at Viento…lull 22 gust 51…LOL (edited)

It does not show in the photo but that smoke on the water hit the parking lot.. Heavy rain and lightning just SW of Mt. Hood now.

Look carefully at the image and you can see 3 windsurfers out just on that side of the river. 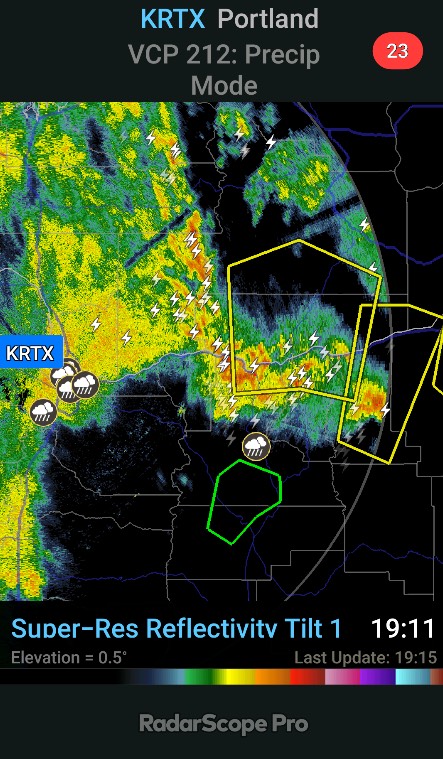 I definitely see two of them…bottom left…even with wildly erratic winds, it’s still surfable even for tiny sails because the mean is so high…you have to catch the gusts and fight like hell to stay above water in the lulls…but I’m betting they’re not slogging.
3:32
that said, it’s about to start raining over the entire Corridor
3:33
Possible rotating supercell just SW of Pendleton
3:36
Hail signature in dual-pole data…VIL (vertically integrated liquid) supports hail > 2″ diameter.
3:36
another severe thunderstorm heading for The Wall…will be there in less than an hour
3:37
And another intensifying, possibly rotating supercell making a beeline for Arlington
3:39
Could you post that to the forums to alert anyone paying attention?

yep…definitely about to rain where you are…that rain looks fairly light compared to what’s going on west and east of you, but it’ll dink with the winds in the Corridor, for sure.

rains thickening up on radar as they approach…combined with gusty winds, visibility will be quite low over the next at least hour
4:01
This is what I was talking about, though…storms moving fast, giving almost no warning, conditions becoming chaotic.
Thunder every 10-20 seconds now

storms backbuilding westward along the first spiral band associated with the upper-low, deepening just as they get overhead for the Corridor, becoming borderline severe as they head for Doug’s and Avery, and definitely severe for the cell heading for The Wall.
4:13
LOL…looking at total lightning data with my RadarScope app…holy bananas…

one sec…
4:16
This is just impressive as hell
LightningShow

Time period? Here is the latest radar of the storm and how fast it hit the corridor.

This shows all strikes in the last 5, 15, and 30 minutes…bright strikes are recent, medium strikes are 15-minute, faded strikes are 30-minute
Sunday Morning after the Storm

Gotta say…I’m pretty damned proud of my Gorge forecast for today. Most difficult forecast of my tenure here by a wide 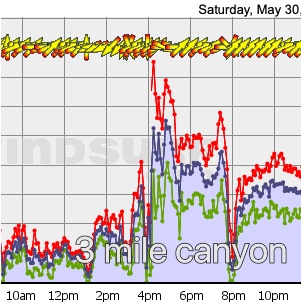 margin and:
If I get gripes for THIS forecast…I’m just gonna chuckle.

I agree, it was a near perfect forecast. Plus, it played out with suspense since the first T storms passed E. and W. of the Gorge in the AM. Then mid day there were strong winds in the corridor and mild winds out east with blue skies over the corridor. Then suddenly mid afternoon the storm hit with rain and lightening in the corridor and  very song winds gusting to 70 out east. Lot to feel proud of Matt.

You’ve gotta be frickin’ kiddng me

Greg says: “Matt totally missed  predicting  of 2 trees being uprooted at Roosevelt by the evening breezes in the parking lot narrowly missing cars.” (Meant in jest.)

scared me for a minute…:)