West Coast Wind Blog: Larkspur/PSQ, often assigned to the R.I.P list, roars with a blast from the past.

Blog.WeatherFlow.com > California & Baja > West Coast Wind Blog: Larkspur/PSQ, often assigned to the R.I.P list, roars with a blast from the past.
By Mike Godsey

Long long ago in a climatologically different universe, Larkspur Landing/PSQ was an extremely popular
windsurfing site.  Sir Francis Drake Blvd. was so jammed on both sides of the highway by windsurfers fighting for parking that is was common for 5 PM traffic to be gridlocked on windy days. And, back then there were 3 windsurfing shops north of the Golden Gate.

It now is hard to believe now but on marine surge days sailors from as far away as the “then-secret launch site”, 3rd. Ave would come to Larkspur when the Peninsula was totally fogged in.

One of my weirdest memories of Larkspur was chatting in wetsuits alongside the gridlocked highway with a physician, an architect, a lawyer, a contractor and myself, a college professor. 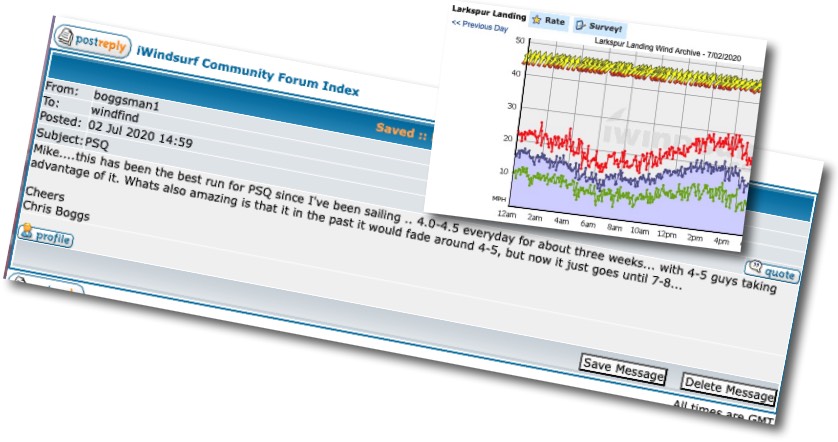 Suddenly an irritated motorist screamed, “Get a job you bums!” And we all burst into unappreciated laughter.

Those days are long gone. The average marine layer depth in the Bay Area has become shallower in the last 2-3 decades so Larkspur is far less likely to be shrouded in the morning for these days.

And since Larkspur’s winds come from the SSW facing Muir Gap hundreds of feet above sea level the fog is usually too shallow to pour through the gap and to be funneled by Ring Mountain to the launch site. So, the vast majority of the windsurfers have vanished from Larkspur these days. Since kiting difficult the waters are often empty.

Back in the day, the fog was so deep it commonly piled up in Muir Gap and  Larkspur blow 4-5 days a week all summer. But how can it pile up in the gap now with a shallower average marine layer?

The answer is the increasingly common eddy pattern. Most days we have smaller eddies that throw SW fog and wind at the Golden Gate favoring the corridor from near the north tower to Point Blunt to Pt. Isabel.

But when we get an elongated eddy that spins from near Bodega to past Half Moon Bay the ocean winds are more likely to be SSW to SSE. And as you can see in this satellite animation from yesterday this piles fog up in the Muir Gap region as indicated in the animation. And this piling continues even when the pressure gradient to the Central Valley is fading. And this in turn makes Larkspur RIP!

So despite the increasingly shallow marine layer, it is premature to delegate Larkspur to the R.I.P. pile of wind starved launch sites.