There are several scenarios for creating micro to mesoscale eddies. Two of the more common factors is a very localizeed low pressure area and wind shear as wind rounds a point or  cape. Southern California kiters and windsurfers are very familiar with the wind killing Catalina Eddy and the Mid Channel edies off Santa Barbara that deepen the marine layer and often block the inbound WNW to WSW ocean winds. The situation is more complex with the increasingly common Golden Gate Eddy off the Golden Gate. Those plying the waters north of the Bay Bridge love to hear about the Golden Gate Eddy since it usually means solid wind especially at Pt. Isabel and Sherman Island. While those south of the Bay Bridge or on the coast know that and eddy often means W to WSW winds that are weak near shore. 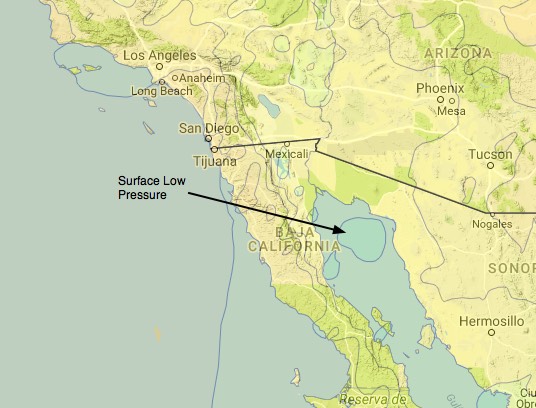 The following imagery shows an eddy with very simple causation. It often occurs in  the morning in the extreme northern end of Baja’s Sea of Cortez near San Felipe.

Notice NNW winds from the North Pacific High streaming down the west side of Baja. Looking closely notice how a bit of that winds turns and is sucke into the eddy in the Sea of Cortez. Likewise wind from the San Diego and Nogales regions are sucked into the the counter-clockwise spinning eddy.

The next image shows the proximal cause of this eddy. In the morning a low pressure area often forms in this region since the Sea of Cortez water is warmer than the surrounding land mass that cools rapidly over night. So wind is sucked towards the pressure gradient and is set aspinning by the coriolis effect. Later in the morning as the land warms rapidly the the low pressure disappears and the eddy fades away.