You rarely expect a perfect forecast. There are far too many variables and far too few weather stations, especially for the vast Pacific upon which to base a forecast. But you rarely expect to have something as basic as the wind direction wrong by almost 120 degrees. I achieved that infamy yesterday, June 9, 2022. My forecast for Pismo was for mild WNW winds. And at noon it looked like I was right on. 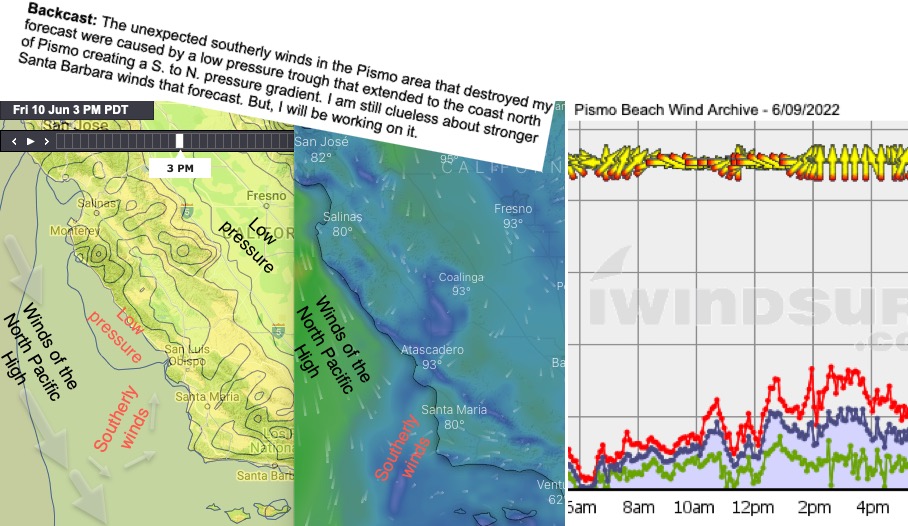 Then 1:30 PM the winds suddenly shifted from WNW to S. This is not a typical wind direction for the Central California coast in June. What happened. Basically, all the heat in interior created a low pressure that expanded towards the coast.

You experience this as a “heat bubble” with very warm air reaching the beaches.

Thursday I expected the bubble to remain inland jazzing up the coast winds. In reality, the low pressure “heat bubble” expanded over the entire coast and way over the ocean killing the coast wind.

The graphics below show the Backcast I issued today June 10 for Thursday. Notice the low pressure over the coast just north of Pismo and the low pressure isobar actually over the Pismo coast. This is the area of the heat bubble. This combo blocked the WNW winds from the North Pacific High AND created the mild southerly winds.

Interestingly enough it appears that the pattern for today developed 24 hours earlier than I expected hence my blown forecast.