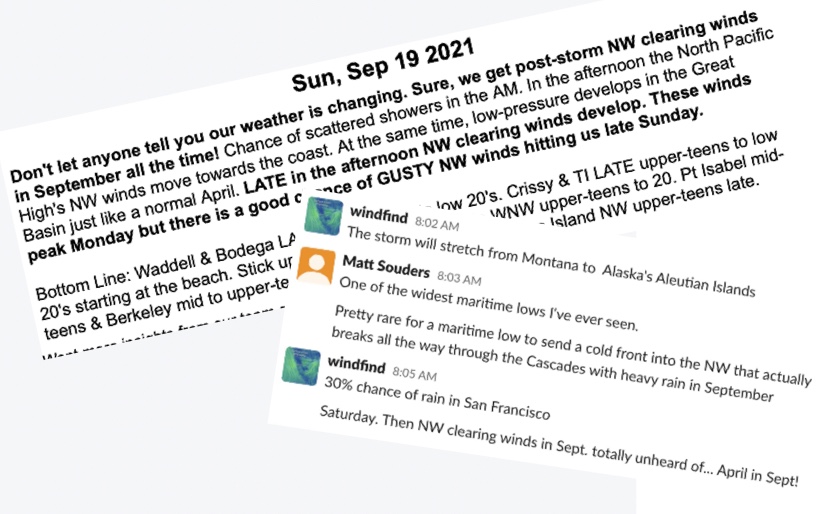 Recently the Weatherflow iwindsurf.com and ikitesurf.com forecasts and our internal Slack channel have seen a lot of chatter about the very weird weather pattern from today, Thursday, Sept 16 to Sunday, Sept 19.

During that time period, we make a rapid transition from a…

This blog follows these events with a series of still graphics followed by an animation that covers the fast-paced action that develops Sunday and continues Monday.

This first image is for today, Thursday Sept 16, shows the major players.

First notice the North Pacific High. The NPH should be an oval a nice shape spaning the waters from California to past Hawaii.

(In recent years, for complex reasons that would require another blog, the North Pacific High often has extended a ridge into far Northern California and deep into the Gorge. This has caused:

Next, notice the huge storm system with all the tight isobars extending from Canada all the way to Alaska’s Aleutian Islands. Let’s keep an eye on both the NPH and the storm.

the Oregon and Washington coast.

Look carefully and you will see the rainy cold front which extends from the Oregon Border to eastern Washington. Also notice how the San Francisco Bay Area is seeing weak SW storm winds and gets a few scattered showers from the cold front. Lastly, notice the location of the Center of the North Pacific High indicated by a large “H” Notice that the NW winds are only hitting Baja at this point.

Now look the 3rd animation that goes from Thursday through Sunday. Watch the day and time at the bottom left of the animation.

Notice as the storm exits eastward the center of the North Pacific High marches towards the California coast.

Now notice how the isobars, which represent the pressure gradient become closer together near the Oregon and California coast Sunday midday. Then watch as the NW winds strengthen late in the afternoon which is represented by the bright orange color.

If you look carefully towards Nevada you will see that Sunday a low-pressure area develops in the Great Basin which pulls those NW winds to the Bay Area, Central California and Baja coasts. Take a peak at Hawaii and you will see all this action also accelerates the Trade winds.