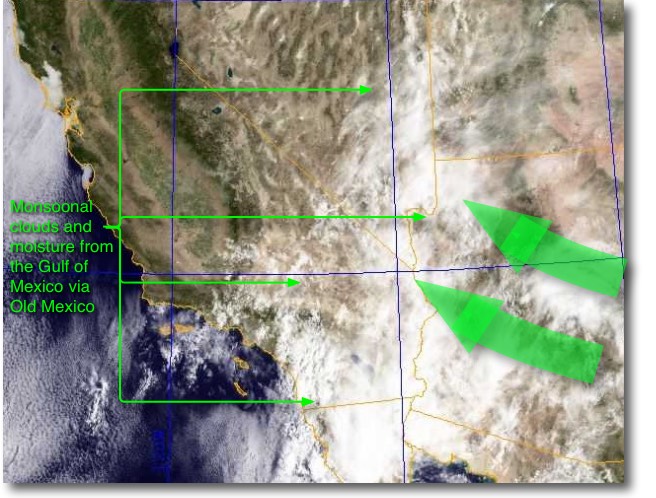 Upper level high pressure sweeps moisture from the Gulf of Mexico over Old and New Mexico to
Southern California.

Looking aloft today you will see scattered high clouds but over the Southern California deserts the clouds are much more dense. Most of the isolated showers from this monsoonal moisture will only create isolated showers in the interior but all the clouds over the deserts, along with the  large Catalina Eddy will probably limit today’s Southern California coast winds.

This is a very minor monsoonal event but this blog will show the origin of these clouds.

In the first image from 11AM today you can see that there are scattered clouds over much of the coast with especially dense clouds over the San Diego region.

But looking over the interior you can see the much denser clouds which will limit the pressure gradient.

The first animation shows the monsoonal moisture heading towards

Southern California. This imagery is from a satellite with a sensor that detects water vapor at levels above about 10,000 feet. The green areas show lower levels of moisture while the orange areas show dense concentrations of water vapor.

Now notice how the winds of the upper high pressure sweep across the Gulf of Mexico and end up bringing moist air to Southern California. This is this is the source of the high clouds you are seeing today.

The next animation shows the winds at ≈ 18,000 ft. The mass of clockwise moving air over