Endless heat and brown skies to the Gorge… comes to an end tomorrow! 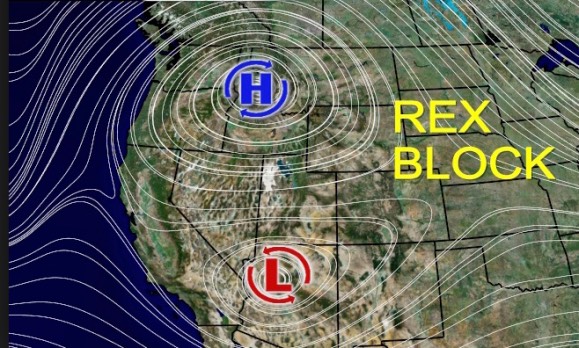 My banner above shows the almost daily view of the Hatchery from my house the last 2 weeks. The smoke is mostly from fires in Canada but its unusual persistence and the unending heat wave is the product of a meteorological phenomenon known as a Rex Block. This type of weather block was discovered by Dr. Daniel F. Rex in the 1950’s and for whom it was named.

You may have seen mention of this phenomenon in the media in recent days along with a stylized diagram like the one on the right.

Let’s do a more detailed analysis of the Rex Block that has been impacting the Pacific Northwest.

The next animation shows the Rex Block on a day last week where it looks like a text book Rex Block. In reality the shape of the Rex block varies a lot and sometimes is disappears for a day or two.

First find the Gorge in the middle right of the image.

Then notice the cool upper trough at ≈ 18,000 ft. on the left edge of the image far out in the pacific. In normal conditions upper troughs like this move to the west coast in a day or two and bring a deeper marine layer, cool clear air and strong westerly winds the Gorge. But in this case the upper trough has been blocked for almost 2 weeks. You will really feel the impact of this upper trough tomorrow Friday Aug. 11!

But back to the Rex Block! Next notice the upper ridge at ≈ 18,000 ft. feet. Upper ridges like this used to develop a couple of times per summer over the North Pacific High and Canada but as you have noticed more frequent heat waves in the Gorge and a thinner marine layer have become the new norm. But that is a different story.

Going back to the upper ridge… The air within this northward looping flow of air is warm and descending, compressing and heating. So it flattens the marine layer clouds from the coast to the western Gorge and traps smoke and pollutants near the surface and the expanding heat destroys the pressure gradient across the Gorge so normally we  have a few days of weak winds followed by a blast as the upper ridge departs.

But in the present Rex Block there is a upper high pressure within the ridge and aligned to the south is a counter-clockwise spinning upper Cut-Off Low over California. This alignment of an upper high pressure and a upper Cut-Off Low is called a Rex Block and acts to blocks the eastward moment of weather systems like the wind creating upper trough you noticed before on the left margin of the image.

This Rex Block also means that weak pressure gradients, smoky conditions and heat have also been locked over the Gorge due to the Rex Block.

In the next image you can see how the upper ridge with the Rex Block dances around but mostly keeps a heat producing upper
ridge over the Pacific Northwest. Especially watch the very last frame of the animation for tomorrow Friday Aug. 11 for therein lies salvation for the wind hungry.

In a normal heat waves forecasting is very easy in the Gorge. No wind, glassy conditions for a few days. Then the forecasters see the upper ridge beginning to depart and the upper trough moving towards the Pacific Northwest so they forecast winds for Jones Beach as the marine layer moves inland with strong gusty winds for the corridor the next day.

But our Gorge forecasters have rarely seen a Rex Block and this has made forecasting very tricky. The upper teens to low 20’s wind of recent days is caused by very local difference in 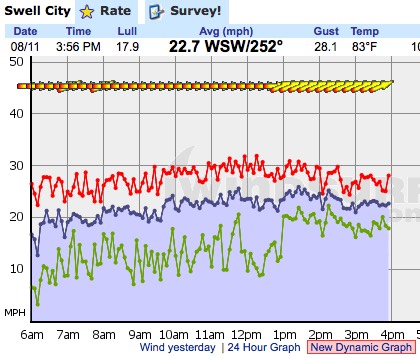 heating from Portland to the corridor that develop abruptly and unpredictably. But the last week has been a learning experience and we will do better for the next Rex Block. And this is important since extreme upper ridges with nagging heat waves and winters like the past one where lingering upper trough brings prolonged bad weather will become more common in the future.