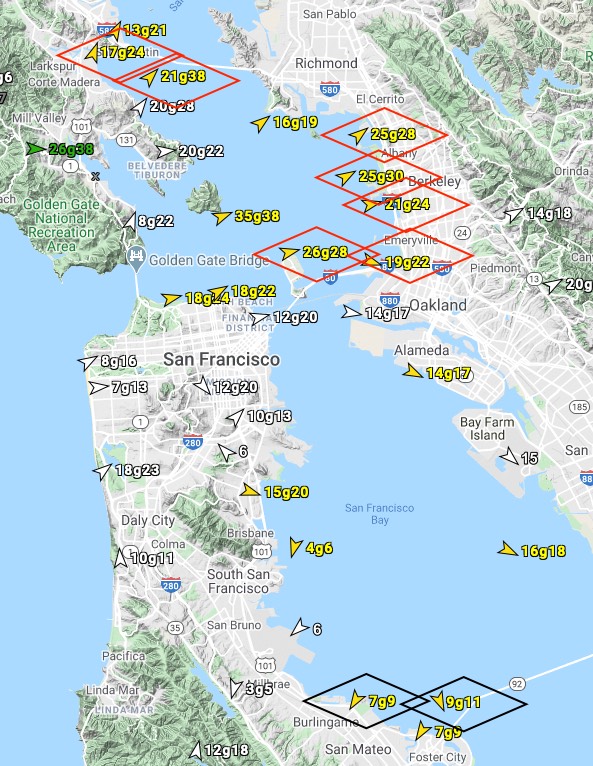 If you are a Pt. Isabel or Sherman Island or sometimes Larkspur regular you are loving all the southerly flow for the unending eddies this summer.

And you are probably noticing how the forecasts usually nail the eddy pattern.

But if you are a Waddell or 3rd. kiter you are probably unhappy about both the eddies and forecast for the winds inside.

It simply is impossible to forecast what time the will die.

If the eddy fades late then the winds inside at 3rd. will often not be very useful since they are light and making it difficult to the WNW winds towards the channel.

But if the eddy dies early then the NW winds from San Bruno Gap will curve into the shore and make for good conditions inside.

But on days like yesterday, today and probably tomorrow the forecasts both for Pt. Isabel and 3rd. are likely to be spot on. The eddy rules, Pt. Isabel roars and 3rd. limps.

Why… the eddy gains upper-level support that keeps it spending all day throwing southerly wind at our coast from dawn to dusk.

This next animation first looks at the variables that create the surface eddy.

1 the North Pacific High pushes a ridge inland causing the NNW winds you see in the animation develop. As these winds flow over the coast range they help the eddy form.

2 At the same time, the Central Valley thermal low expands over the coast north of Marin creating a S. to N. pressure gradient. This also encourages an eddy. 3. Also, NNE to NW winds develops aloft further enhancing an eddy.

But the real kicker for getting an all-day eddy is the counter-clockwise spinning flow you see way above our area as the animation goes from the surface up to about 5000 feet and the NNE winds build.

With this type of support aloft the eddy never dies and we see southerly winds all day favoring Pt. Isabel, Larkspur and Sherman Island.