Frequently I mention the winds at 1000 feet aloft (975 mb.) in my forecast which I am sure puzzles some of you. After all, your kite lines or mast extends mere feet into the atmosphere so why should you care about the winds 1000 feet aloft. Today it is very easy to visualize why these winds aloft matter.

But also notice how the winds accelerate from Benicia to Sherman Island.  This corridor from Benicia to Sherman Island is the only place in the Bay Area that is wide open to the west with steep hills to the north and south. This acts to funnel the winds just aloft over this corridor and some of this wind transfers momentum to the weaker surface winds increasing their strength and adding a gust factor. Looking at the wind graph notice the winds spikes and deep lulls which is typical when there are strong winds aloft.

Since we have deep marine layer clouds today this strong wind aloft creates the waves in the clouds you see over Sherman Island. 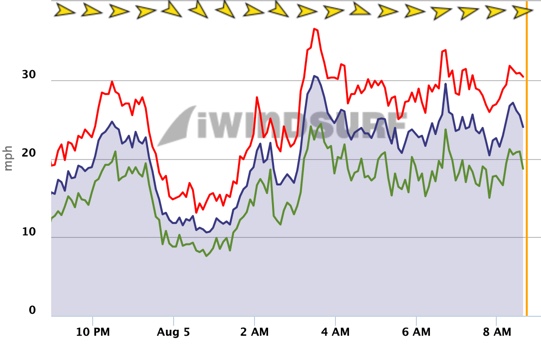 These are standing waves so while the rest of the marine layer clouds are moving inland these waves appear stationary as they constantly reform over that Sherman Island.

Look carefully at the lower-left corner of the animation and you can see the NW winds moving the clouds. Those winds will move to the coast this afternoon.