by Mike Godsey & Matt Sounders, mikeATiwindsurf.com Link to Part Two of this blog. 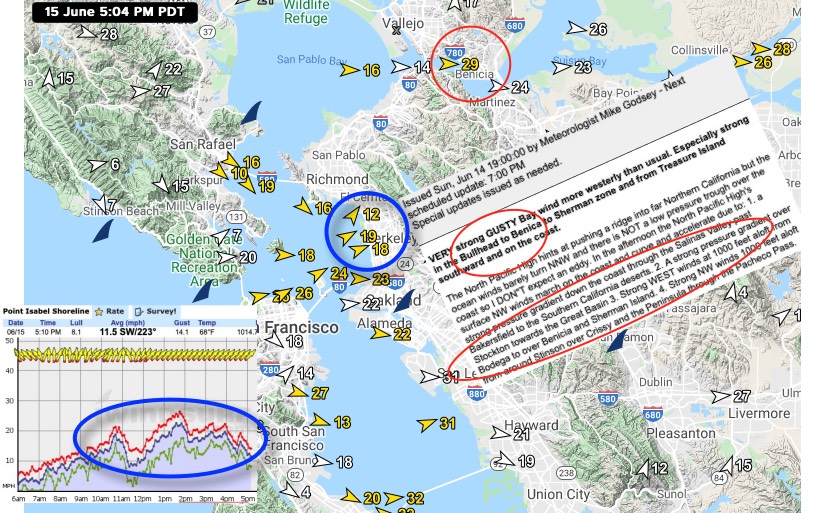 So take a look at this wind map from today, June 15.

Do you see two very strange things? Benicia has AVERAGE wind of 29 and my forecast last night called for very strong UP AND DOWN  winds for Benicia.

As you know is a very beautiful town and one of the most attractive places to kite in the Bay Area.

Also, notice the great difference between the Pt. Isabel and Berkeley winds. And note the Pt. Isabel wind graph with several precipitous fades during today.

Lastly, check out the end of paragraph discussion about very strong winds aloft at about 1000 feet.

And why have the forecasts so often this season called for UP AND DOWN  wind?

To answer these questions let’s talk about “Standing Waves”.

Looking at the North Pacific High’s surface ocean NW winds and the strong pressure gradient towards Bakersfield and the Great Basin you would expect moderate winds today. But the winds at the ocean buoys is only in the upper-teens to 20 while many sites have upper 20’s winds. And, checking every Bay Area wind graph you see up and down winds and some sites having huge fades while others, like Benicia over performed. 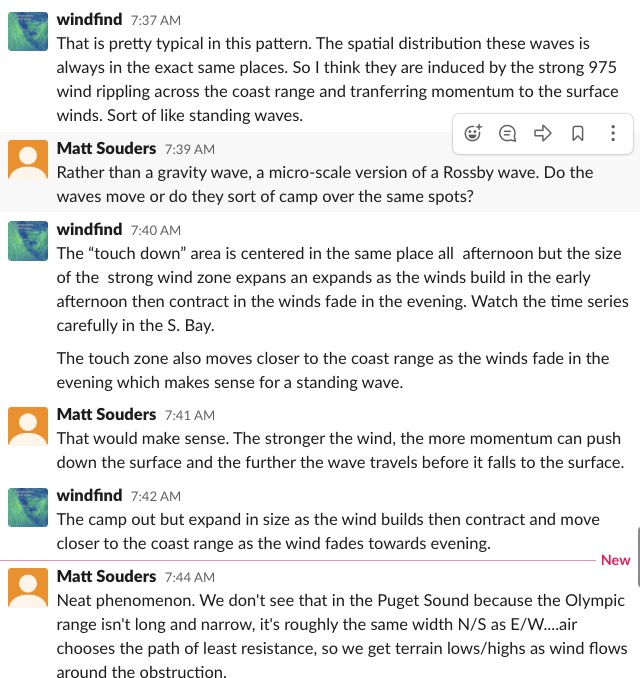 The reason for much of this was the W to WNW direction of the 975 mb. winds ≈ 1,000 ft. aloft. Looking at the animation above notice how the strongest wind, in red, seems to be in distinct W to WNW bands that barely move in their location.

Rather they start as small bands in the late morning the become large bands’ of strong winds in the afternoon and shrink towards evening.

Meanwhile, the models projected very strong West winds at ≈ 1,000 ft. aloft over the North Bay and very strong WNW winds over the Peninsula this afternoon.

Matt Sounders, one of our Gorge meteorologist, and I discussed this banding pattern today and concluded that the bands we are seeing are caused by standing wind waves that develop as the 975mb  winds hit the coast range.

This these waves of wind ripple across the Bay waters and when they touch down they transfer momentum to the surface winds creating areas of very strong but up and down surface winds.

In the case of Benicia it is right in the middle of one of these bands hence the crazy strong wind. Likewise The Stick, 3rd, Sherman Island, Crissy etc. are located near the middle of a band.

While other sites were beween bands and had much weaker winds. And poor Pt. Isabel was right on the edge of a band but was left in the dust as the band moved away.

This last animation shows the band pattern over a 3D image of the Bay Area with proposed 975mb winds rippling over the Bay Area.