Strong winds for Southern California… but where, coast or interior?: 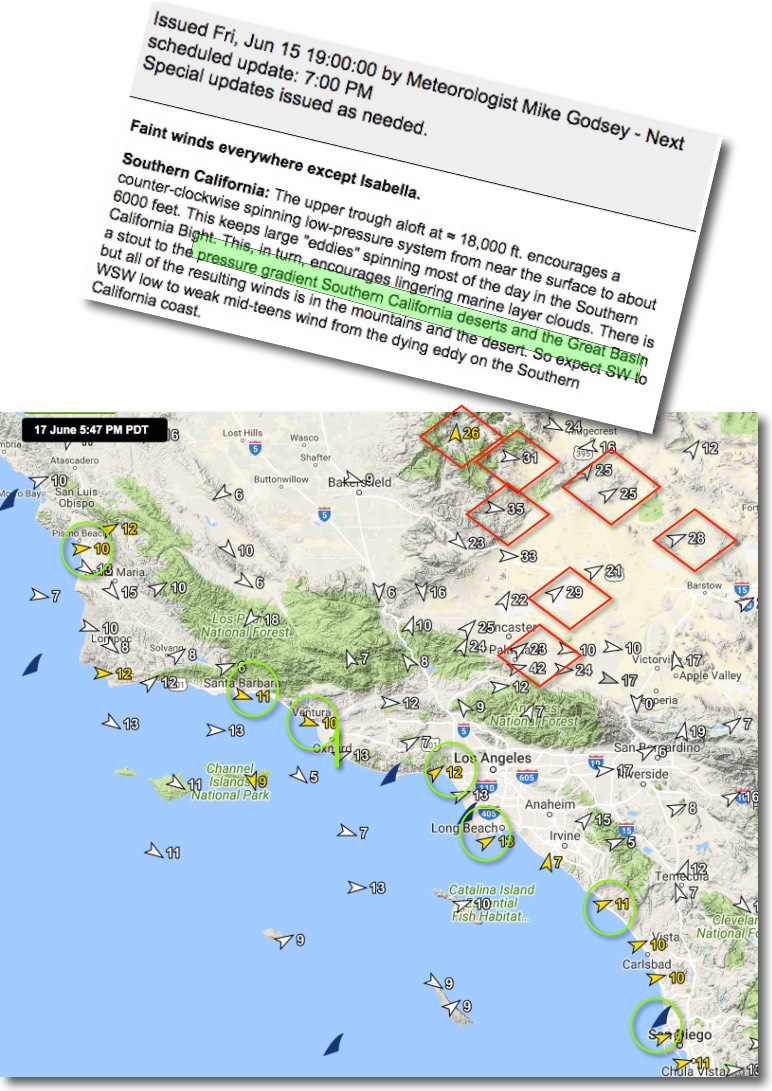 As you follow the Southern California forecasts you probably find yourself looking forward to the words “strong pressure gradient to the Great Basin” Maybe it does not make any sense how a place so far away from the Southern California coast can make for stronger beach winds but you have noticed the relationship between that gradient and strong winds in your kite or sail.

But last Friday you may have been puzzled when my forecast (replete with typos) paired those normally magical words about the Great Basin with a forecast for very weak winds on the entire coast from Pismo to San Diego.

The green circles in the 2nd. image shows that every site on the coast had very weak wind even late Friday afternoon.

But looking at the red diamonds note the very strong  wind in  the  mountains and the desert. How can a strong pressure gradient to the Great Basin low pressure cause winds  in the mid 20’s to low 40’s  inland while the coast only has sub to barely low teen winds?

To  short answer is “isobar distribution”  Let’s explore that topic. This animation shows the western USA and the eastern Pacific. First check our the shape and location of the North Pacific High.

Note that the center of  this wind machine is not the typical oval shape between the west coast and Hawaii. Instead it has been flattened into a sausage shape and much of the high pressure is in Canadian waters far from Southern California.

Now check out the caption in red about isobars. Those white lines in the image are lines of equal pressure. The closer the lines are  together the stronger the pressure gradient and the winds.

The next image is a close up of the Southern California to Great Basin zone.

In this image check out the low pressure in the Great Basin. Notice all the isobars around that low pressure. Especially note how close

together the isobars from the low are right over the interior of Southern California.

Also notice how strong the wind flow is in this area all the way to the Great Basin.