An autopsy of an East Bay wind crash! 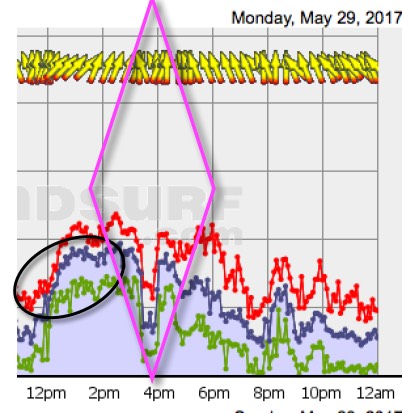 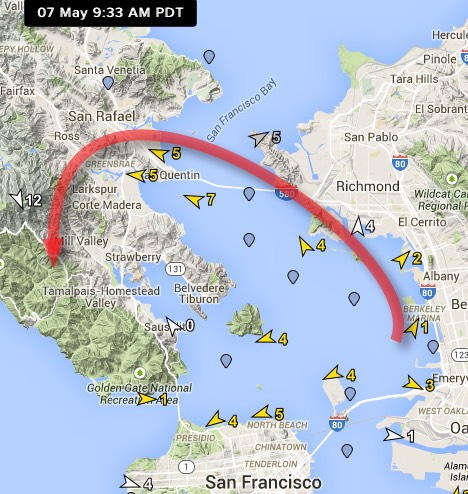 If not take a look at this wind graph and imagine what it was like on the water.

The job of this blog is to solve the mystery of what caused that precipitous crash in the winds. Let’s start by taking a look at the image on the right of the typical weak 9:30AM  winds from Berkeley to past Larkspur. For lack of a better name I call this curving wind pattern the Larkspur Eddy.

Normally the Larkspur eddy is not worth mentioning in our forecasts. Sure long time Larkspur regulars know that summer commonly brings weak SE winds in the morning. And Berkeley and Pt. Isabel locals who drop by those sites to walk their dog know that often there 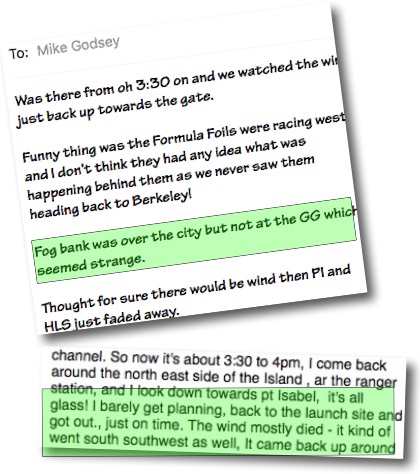 are weak SSW winds in the morning. But those “eddy” generated winds always shift when the strong WSW winds build in the
afternoon.

But something really weird happened on May 28 and even more profoundly on May 29, 2017 that at first seemed totally mysterious. Both days the Pt. Isabel winds had an abrupt die off at about 3:30PM.

When things like this happens I try to do an autopsy of the forecast to help me learn to forecast days where a fade die off may happen. As you have noticed in recent years we warn of sudden die offs pretty commonly in the spring for Pt. Isabel and Berkeley and more rarely Treasure Island. But May 28th did not seem that sort of day.

So I put out a notice

in my Sunday evening forecast asking for East Bay sailors and kiters to mail me their observations of the die off.

I got lots of reports about people floundering at 3:30 but 2 mails in particular had critical details that helped me start the autopsy. Check out the text in green in these excerpts from those mails.

Then the next day, with Kerry forecasting, the exact same event occurs but with an even more profound wind die off. So I really needed an autopsy of both forecasts.

My first step was to animate the satellite imagery for that day. And sure enough a weird pattern of fog emerged. Watch this satellite animation and watch the fog burn back.

At 3:30 I have stopped the animation. Notice that the sky is clear both east and west of the Golden Gate. Now that is really strange since normally if there is coast fog in the afternoon then there is fog at the Golden

Gate and often a streamer of fog heading towards Angel Island. But instead notice how parts of San Francisco are foggy. Now look even more carefully when the animation pauses and notice the streamers of fog from San Bruno Mt. and Twin Peaks. That shows that there are very atypical SSW wind over The City.

To get a better handle on this I animated a Tiburon cam image of San Francisco from night to 3:50 PM. Notice that during the night and early morning there is the typical marine layer clouds covering the Bay Area.

Then in theearly afternoon is narrows and becomes a broad streamer from the Golden Gate through the Point Blunt to Treasure Island Slot. All of this is normal.

Then watch carefully from about to 1:30PM to 3:50 PM. Note how the Bay clears and the fog appears to be SOUTH of the skyscrapers. 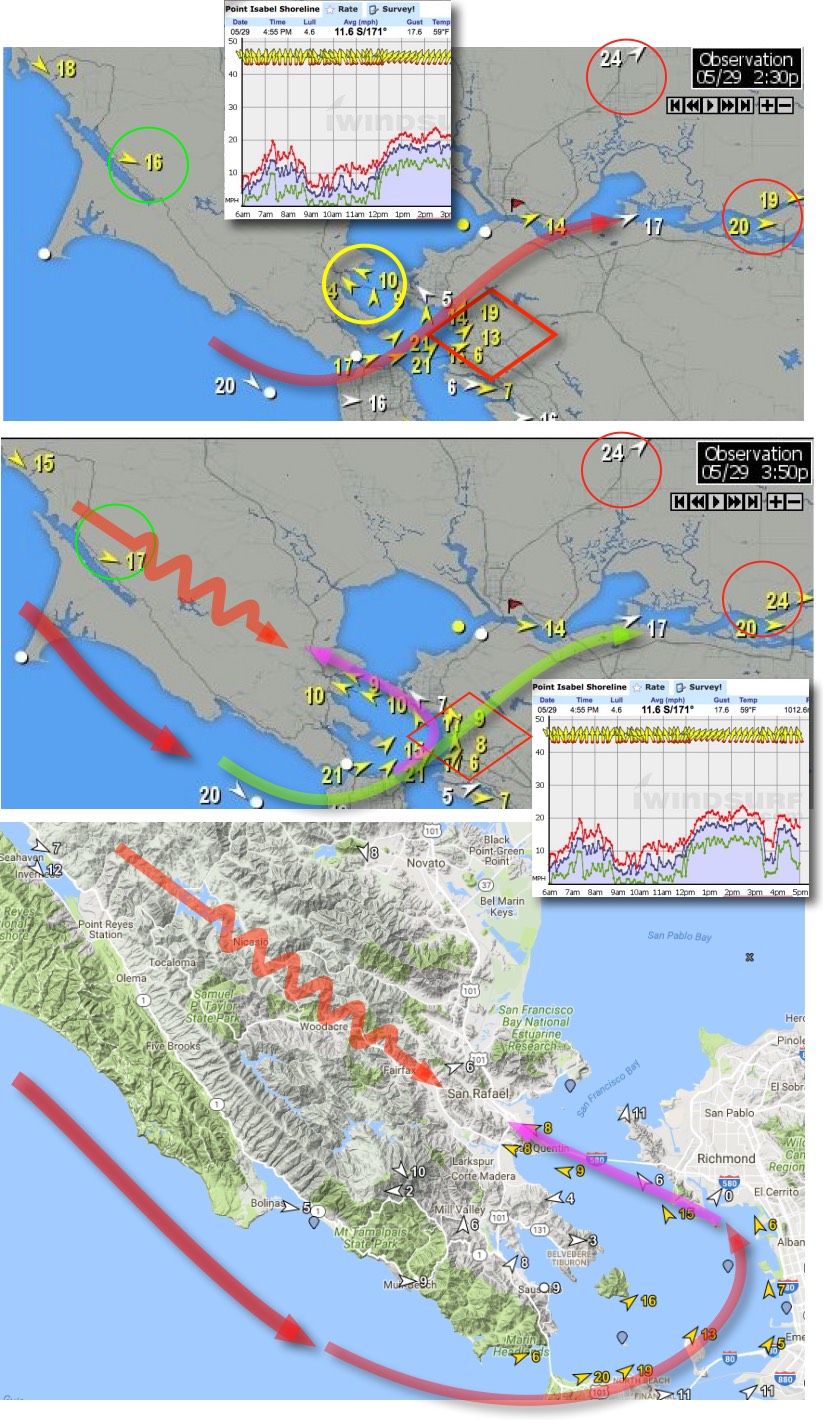 This is not normal and reflects what we  saw in the satellite. So what is going on?

Digging deeper I animated the Bay Area wind map to see how the wind changed at all the sites that afternoon. Looking at the wind map to the right notice how there is a weak Larkspur eddy in the early AM. Then WSW upper teens winds hit Pt. Isabel around 1:00 PM and the eddy dies.

Then abruptly at about 3:30PM  notice how the eddy reappears going all the way to Larkspur killing the Pt. Isabel winds.

The next 3 images show how I developed a working hypothesis about how the eddy killed the Pt. Isabel and weakened the wind at other nearby sites.

The top image shows the wind flow at 2:30 PM. Notice that there is upper teens to about 20 winds from the ocean past Treasure Island to Pt. Isabel and on to Sherman Island.

Pretty much a normal day for Pt. Isabel.

Then in the second image notice that there is a sudden drop of the Pt. Isabel winds and the yellow wind arrows show shift to S. winds.

Notice how there are now SE winds at Larkspur but NW winds rippling over the Marin coast range.

Paradoxically this means we have two winds diametrically opposed on the bay  side of Marin!

Also notice that the Crissy and Sherman Island winds continue unabated during all of this.

This tells us that the pressure gradient to the Central Valley has not changed during all of this.

The third image in this series shows the steep and complex topography the NW ocean wind over Marin has to traverse.

Then notice the radical curvature of the winds from the Golden Gate to Pt. Isabel to Larkspur. You might think that all that would happen is that these 2 winds would collide but there is more to the story. 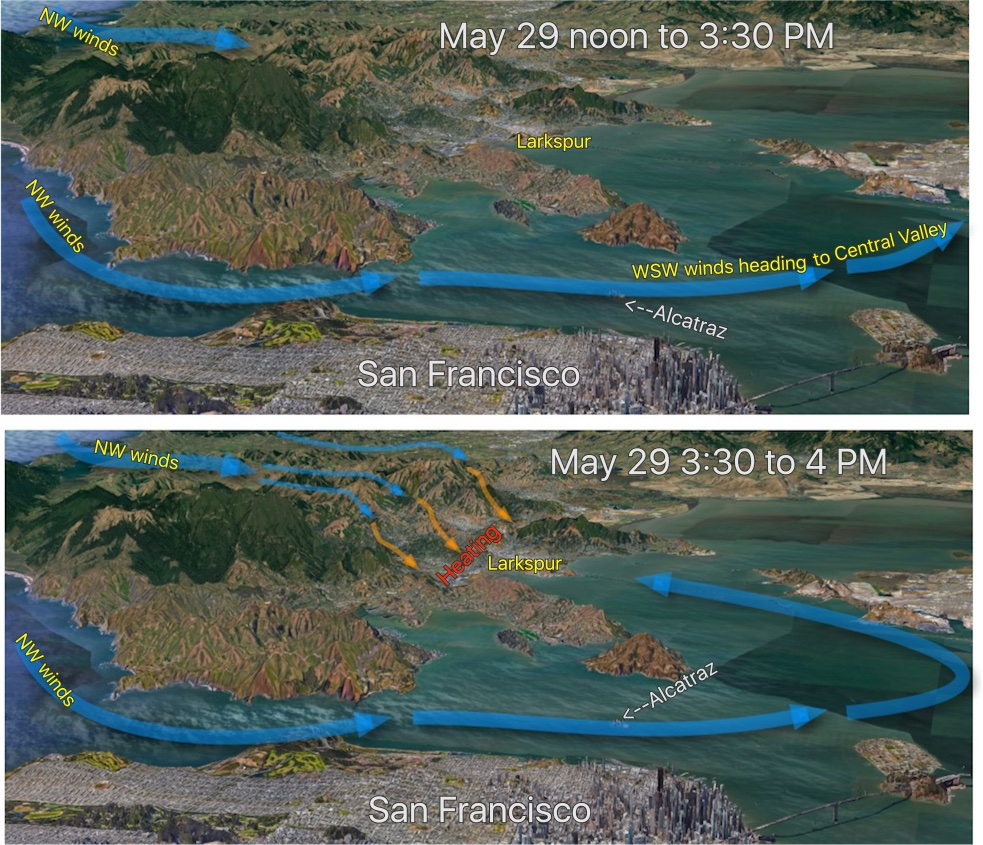 The top image shows the afternoon winds up to 3:30PM. Notice how the NW wind curves through the Golden Gate and passes by Treasure Island and over Pt. Isabel.

Also notice that the NW winds are barely penetrating over the coast range of Marin in the upper left corner of the image.

The second image reconstructs what happened for 30 minutes after 3:30 PM. 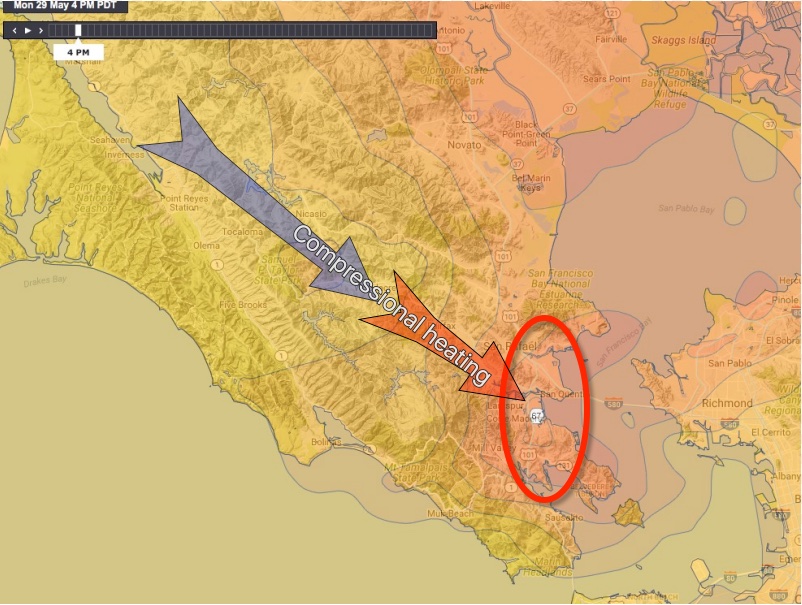 My reasoning is that the NW winds finally climbed over the Marin coast range.  Then as they descended into the flatlands east of Kentfield compressional heating occurred jacking up the local temperature and creating a very local low pressure zone.

My hypothesis is that this low pressure  zone briefly caused the winds in the Berkeley Pt. Isabel corridor to change direction towards the Marin low pressure.

To begin to verify this hypothesis I looked at the model temperature forecast from the 3km NAM. As you can see in the next image the model was forecasting a very local warm up in the bay shore of Marin centered over Larkspur. This supports my hypothesis.

Why did our high resolution winds models not pick up this event and allow us to forecast it in advance so kiter, windsurfers and boaters would not be becalmed?

To keep the forecasts manageable we break the time slots into 2-3 hours slots. However this means  that brief events like this will not register. And even if we went to the max. time resolution possible a 30 minute even would only show as a decline in the wind. But even that would help people. So the next time I see this pattern I will try increase our forecast time resolution up so at least you have a heads up.

There is a moral to this convoluted story. The key to better forecasts for your site is to send us information about any thing interesting that you see on a day we blow your forecast. Send messages to mike AT iwindsurf.com