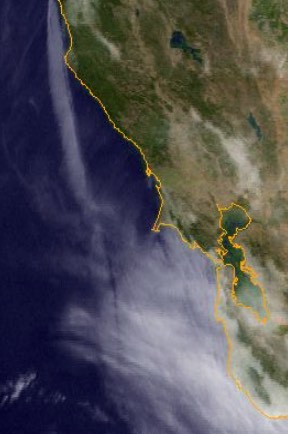 So forecasting the existence of an eddy and its fate during the day is a high priority for our forecasters.

Sometimes forecasting an eddy is a no-brainer like this May 25, 2019 eddy as seen in a satellite animation to the left.

But often the eddy is not as well organized as this or it may be obscured by mid-level clouds so you can not see the eddy at all as was the case for the May 29th, 2019 eddy on the right.

And if you miss forecasting the eddy everyone is going to be upset since the winds will be radically different than forecast.

So here are some of the tricks we use to detect an eddy when it disorganized or hidden by clouds above the marine layer clouds.

So, let’s look closer at that May 29, 2019 eddy in this third image and show you some of the clues to detect an “invisible” eddy.

The sort of haze you see just west of the Golden Gate is actually mid-level clouds above the marine layer clouds and they are blocking our view of the actual eddy.

But if there is an eddy there should be southerly flow along the coast. And that means that fog should pour through any south facing gaps in the coast range.

So one thing I look for is for fog in the Olema Valley that extends from near Stinson Beach towards Tomales Bay. See that finger of fog in the image going up the valley. That suggests an eddy at work.

The Marin sites like Larkspur and Brickyards/Peacock Gap used to blow stronger and more often decades ago when the average marine layer was deeper.

These sites need a deep marine layer since they are fed wind from the vague high elevation Muir Gap.

So these days they need strong southerly flow to make the fog pile up in Muir Gap. Note the mass of fog in the image. That strongly suggests and eddy (the same thing happens here during a marine surge)

Now notice the mass of fog in the low area in the coast range in the Hwy. 92 Gap. Lots of fog in this gap also suggests and eddy and can mean unreliable W to WSW wind inside at 3rd.

The last image is a relief map of the Bay Area so you can better see the topography defining these south facing gaps in the coast range.

Remember that finding an eddy is only the first half of the eddy wind equation. We also have to try to forecast how much of the day the eddy will spin before dying.

If it dies early then the coast and Peninsula may have good wind.

If the eddy endures all day the coast and 3rd. Ave. will have crappy wind inside even though there may be good wind in the channel.

And the goal of forecasting the time the eddy dies is still elusive.

Worse sometimes the eddy mostly dies but leaves some SW flow through the Hwy. 92 gap that just barely reaches the 3rd. Ave launch.

You can see the impossible forecast situation this presents in the animation below.