West Coast Wind Blog: This is the end… Death of a record breaking heatwave

Blog.WeatherFlow.com > California & Baja > West Coast Wind Blog: This is the end… Death of a record breaking heatwave
By Mike Godsey 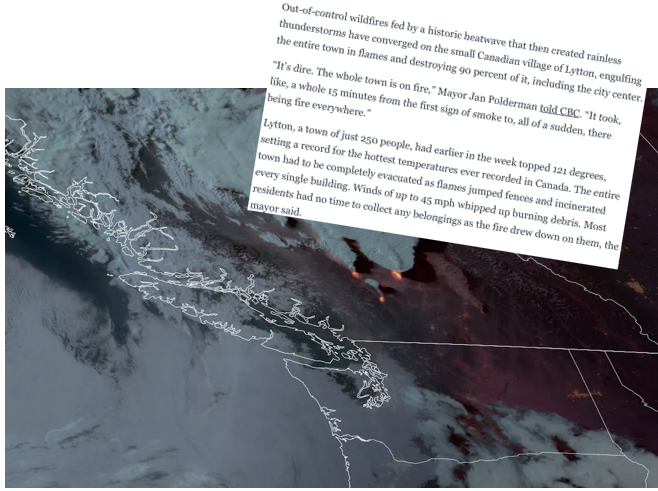 The all-time record-breaking heatwave for the Pacific Northwest and western Canada is winding at least from the Coast to Gorge.

This event brought Portland Oregon to an unbelievable 116 degrees.

And much further north Lytton, which is about 155 miles east of Vancouver, British Columbia, reached 121 on Tuesday. This is a temperature higher than the all-time 118 degree record for Las Vegas, Nevada. The next day 90% of Lytton was destroyed in a wildfire.

A total of 486 people died in British Columbia due to the heatwave. Over 60 people, mostly those without air conditioning and living alone, died in the greater metropolitan area of Portland, Oregon.

The present blog tells the story of how the massive dome of upper high pressure was ejected by a small upper low-pressure area just west of the Oregon and Washington coasts.

But first, let’s look at what the winds looked at in the Columbia River Gorge:

In the first wind graph, Monday, most of the day was over 100 degrees and the winds were weak and sporadic which is typical for a major heatwave in the Gorge. But look carefully towards midnight. This is a weird time for winds to suddenly near 30 mph. Clearly, something is beginning to happen.

The second image shows the winds have faded overnight as the land cooled a bit but all day long the wind steadily ramps up.

This ramp pattern tells us that something is gradually changing somewhere aloft. And that “something” is the topic of this blog.

The third image shows that the “something” has created very strong winds that while gusty are in the same range all day.

So what is the “something”?

Assuming you have looked at the previous blog you know that the heatwave was caused by a huge northward extending loop in the upper-level winds.

This loop or Upper Ridge was blocked so it could not travel eastward so it just squatted over the Pacific Northwest for days making us hotter and hotter.

In the same blog you saw that tiny Upper Low west of California. That Upper Low is the “something”.

Then the energy of the upper low fed into the upper high causing it to slowly move northward. As it moved northward it was gradually swept eastward by a stronger part of the polar jetstream away from the Pacific Northwest.
Then without the heat dome’s descending air crushing the marine layer clouds, they were able to thicken off the coast.
Next,  as the upper low came over the Oregon coast it caused a counterclockwise mass of air to develop causing a Marine Surge of southerly wind towards Astoria that curved eastward towards first Jones Beach.
As all of the above was building the winds began to build late Monday night in the Gorge.
Then Tuesday as the upper ridge’s heat dome departed the Gorge winds showed that very atypical slow steady ramp-up you see in the wind graph above.
By Wednesday the dome was far enough away that the marine layer clouds reached the Gorge and the west winds ripped all day in a more typical Gorge pattern.
Unless you are a real weather geek you can finish your reading right here.

Basically, the heatwave got too strong to survive. The block was so strong that the southern stream upper low had nowhere to go but due north, which began kicking the blocking ridge east and north and tightening the jet stream over northern Canada, leading it to shear out.

You can watch this happening in this final animation.

As the upper low was forced north it did two things:
The jetstream on the north side of the upper ridge became stronger because the upper low injected yet more heat aloft into the ridge thanks to latent heat release from cloud formation.
Meanwhile, it was also advecting (moving by force) the existing hot air north and into further conflict with polar air. That tightened the thermal gradient aloft, making the jet stronger and this causing the ridge to shear out.
July 1, 2021in California & Baja, NorthwestBy Mike GodseyMore from Mike Godsey