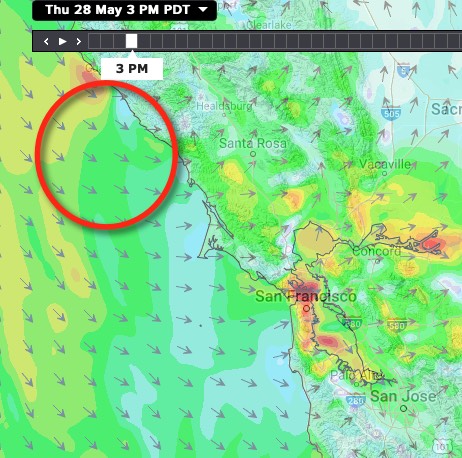 So today looked like a pretty routine forecast with a shallow marine layer and a low pressure retracts back to the valley and I expected the pressure gradient to go up up and the NW winds curve in.

With the strongest pressure gradient towards Stockton I expected the winds to peak in the zone from the mid-Golden Gate to Shimada Park to Sherman Island PM.

You can see part of the model output behind the forecast in this first image.

I also noted there was a chance that a thermal trough (aka “heat bubble”) would move back over the East Bay nearshore waters making the winds unstable. I even put out a warning that “IF you notice warmer air than normal for a near-shore stay close to the launch!”

But even at dawn, I noticed a  bit of a disturbance in the marine layer clouds just west of Bodega. That was enough to tell me I would not be sailing this morning even if there was decent wind since there was a chance that disturbance was an eddy forming. And I might have to do an update.

Sure enough by 9:18AM I could see stronger hints if an eddy so I put out the Special Update you see in this second image.

And by the regular 11:30 AM update I made a major update to the forecast upping the Pt. Isabel winds, calling for Crissy to be to foggy and 3rd to have unreliable winds inside and  for the Waddell winds to be blocked. It looks like I was right. So be sure to always take a quick look for Special Updates.

This last image shows the eddy that upended the forecast. Notice how subtle it was at dawn.