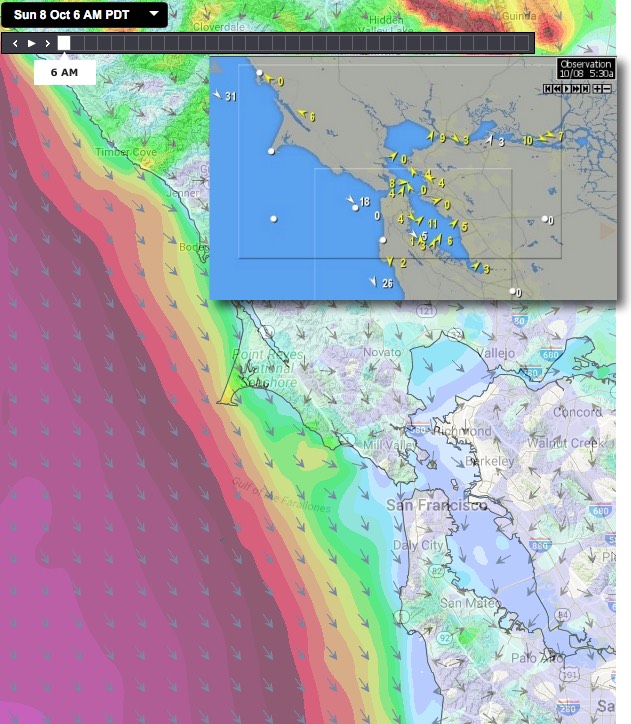 2 factors make it unlikely much of that wind
will reach into the San Francisco Bay Area.

Take a look at the powerful NW winds in the mid 20’s to low 30’s at the ocean buoys predawn today when I was doing your forecast. Then look at the model output for 6AM. Both see really promising for a wicked strong NW winds for the coast and NW favored sites within the Bay. At a glance this looks like the sort of day that Marin windsurfers would think about heading to the waves at Tubamancha as seen in my banner above.

But my 7:30 AM forecast is for mostly weak or unreliable winds:

7:30 AM: A beefy summer type 1500 mile wide North Pacific High pushes an extension or ridge into Northern California and all the way to North Dakota. This causes its isobars to stack up over California from the Oregon border to near the Bay Area. So North wind is blowing the Central Valley and just aloft over the Bay while our ocean winds are NNW in the mid to upper 20’s just offshore. Meanwhile i can see the reflection of the Golden Gate towers in the mill pond like bay waters. So what are the odds of getting that powerful ocean wind to the coast

and Bay? We have 2 unfavorable factors: 1. The N to NNE winds aloft continue all day and will fight against the NW wind trying to curve into the Bay. 2. Relatively air from the Central Valley will encourage a bulge in the valley low pressure to stay over much of the Bay Area so we have a weak pressure gradient. So the only weak winds at most Bay sites. Waddell and Coyote have the most promise.

So, why the pessimism?

This animation shows the strong NW winds as modeled by a medium res. model. Note at 6AM the strong NW winds are almost at the Golden Gate. But then mid morning strong N to NNE winds roar in from the Central Valley. This is due to a ridge from the North Pacific High that moves in over Northern California from near the Oregon border to near Sacramento.

While this imagery shows the surface N-NNE winds there is similar wind just aloft. Note how the NW ocean wind becomes weaker and more patchy as the day progresses. This happens as the 2 winds battle just offshore. At the same time the northerly flow encourages the Central Valley thermal low to bulge over the Bay Area keeping the pressure gradient weak.

But also notice how the N-NNE wind weakens some around 2-4 PM. And how the NW ocean wind builds and moves closer the coast.

This makes for very tricky forecasting since if the N-NNE winds were to fade early Waddell and Coyote and 3rd. Ave. could see strong winds.

But my reasoning is that this late in the year the pressure gradient will not have time to build to make this happen. Anyone want to take bets? 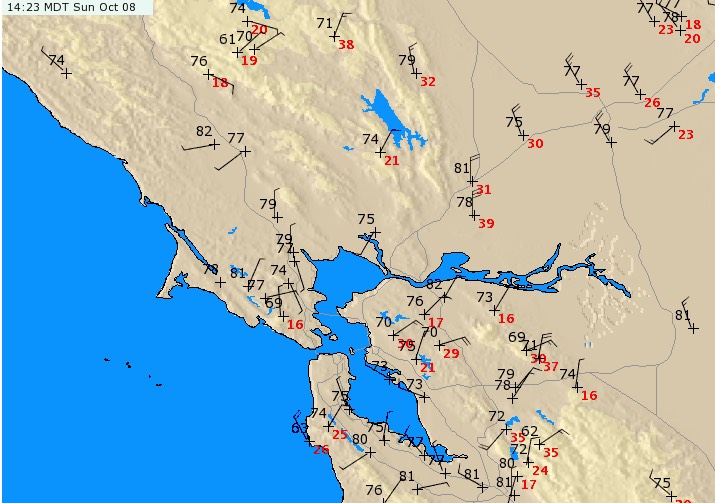