The headlines are heating up about record temperatures being set from Salt Lake City to Tucson to Dallas and to the 0 percent contained ravaging Southern California fires. At this time it looks like Death Valley, the hottest place on the planet, will reach 127 by Monday.

In response, the NWS has posted Excessive Heat Warnings for an area populated by 34 million people. And unlike normal western heatwaves, this is going to be a humid event adding to the misery index.

This first graphic shows the culprit behind all this misery up at ≈ 18,000 ft.

See that clockwise mass of upper air spanning the USA from San Francisco to Lousiana? That critter is known as an upper-level high-pressure system. How can something so simple looking and innocent heat up more than half of the entire USA?

To answer that we have to look at this upper high pressure more closely.

In the top of this second 3D image, you can see the clockwise spinning winds of the upper-level high-pressure system. The blues and violet colors are where the highest wind speeds are while the green is weaker wind. All of this wind is at about 18,000 ft. and it is spiraling downward towards the surface.

1. As this descending air approaches the surface air compresses and heats. If you have ever filled a SCUBA tank you know how hot the tank becomes as the air inside it compressed. Or perhaps you have a vague memory of the gas laws for high school chemistry. Either way… compression = HEAT.

2. At the same time, this descending air compacts human pollution and natural particulates smoke closer to the surface so the skies become brownish. The increased concentration of pollutions makes for a higher risk of lung problems in vulnerable people 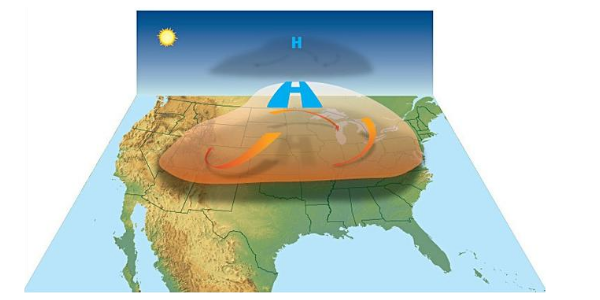 3. This subsiding air also makes it difficult for clouds to form so we lose the shading effect of clouds. Hence more heating.

4. The intense sun and hot air dry out the soil and plants so we lose the cooling effect of evaporation and the hot land further heats the air.

5. As the air becomes hotter it rises and bulges upward in patches so the air aloft becomes hotter and the heat-producing high pressure becomes stronger. For example, 11,000 ft. glacier-covered Mt. Hood in Oregon is forecast to reach 88 degrees Sunday

7. All of the above means that the air becomes hotter and dirtier each passing day until the high pressure departs. 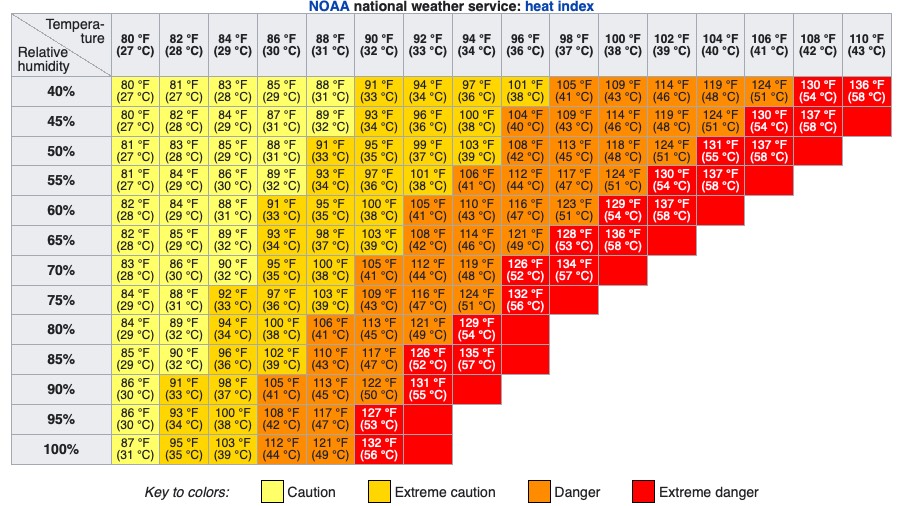 9. Heatwaves also gradually heat up the thermal mass of houses and buildings. And at a certain point, you have to use the air conditioning even at night. And the combo of day and night air conditioning can lead to power outages and more misery

10. All this heat ripples through the energy gird. High-pressure overhead means weaker winds so throughout the West wind turbines are idling. As rivers heat dams are forced by law to increase water releases to keep Pacific Northwest salmon alive and independent of energy needs. Hot air is thinner so airliners have to burn more fuel to take off.

11. Usually, heat waves in the western USA are dry and hot but in this case, tropical moisture streaming into the region from former tropical storm Elida means we will have a more humid heatwave. Higher humidity makes it harder for perspiration to cool our bodies so the misery factor goes up.

12. So how miserable is it going to be at your house? Just find out your forecast temperature and forecast humidity and determine how cautious you should be this weekend.

Parts 2, 3 and 4 of this blog will talk about how a heatwave impacts wind at the micro-level first for Southern California,  San Francisco and the Columbia River Gorge.