West Coast Wind Blog: Where sails and kites fill is determined by where Eddy Would Go…

Blog.WeatherFlow.com > California & Baja > West Coast Wind Blog: Where sails and kites fill is determined by where Eddy Would Go…

The meandering of eddies is unpredictable by their very nature of an eddy. Take a look at the eddy my banner above. As you can see it is positioned so it will shoot west wind through the Golden Gate towards Berkeley. Hence the famous 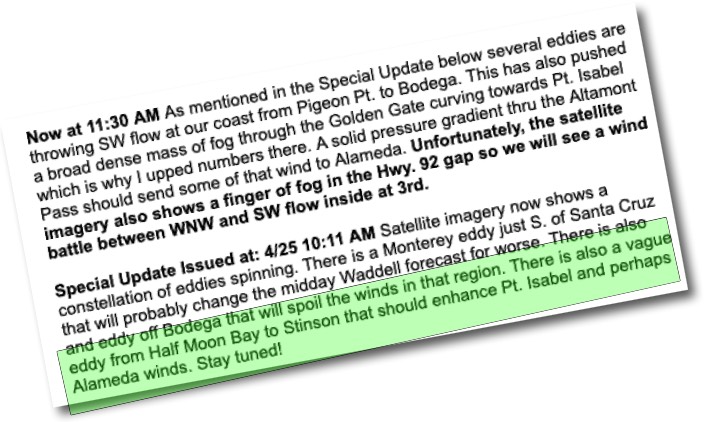 Berkeley “T” you see in the imagery over Berkeley.

But now visualize the eddy being further to the south. That would mean more SSW wind that would favor Pt. Isabel as well as Larkspur and Brickyards/Peacock Gap.

It is very difficult to guess the position of the eddy at 6AM when we are preparing the forecast. That is why yesterday I issued the special update at 10:11 AM yesterday about the eddy and Pt. Isabel winds.

Let’s take a look at yesterday and the eddy situation and see how it favored Pt. Isabel more than Larkspur, Brickyards/Peacock Gap and Berkeley and why the 3rd. Ave. winds INSIDE were much better than my forecast.

First focus on each of the counter-clockwise spinning eddies and their movement. Notice how they mostly fade in the afternoon.

Now, look at each of the gaps in the coast range as highlighted by the gray arrows and text.

Notice how the eddy action causes a build up of fog in the Hwy. 280 area and the Hwy. 280 area. My guess was that this would make for weak unreliable winds INSIDE at 3rd. I was wrong since as the eddy faded the fog stalled and 3rd. INSIDE was good. It is very easy to see this if you are in the area mid-afternoon. BUT forecasting this at 7AM or even 11:30 AM is challenging.

Now, look at the fog massing in the Muir Gap. Since this gap is at high elevation I was pretty sure the fog would not make it through the gap enough to help Larkspur and Brickyards/Peacock Gap winds. I was right.

This was a tricky one and I forecast just upper-teens winds since I did not expect the fog to get to the top of the Alemany Gap. For the same reason, Alameda was not as windy as it can be in an eddy flow.

I nailed this one since the Golden Gate Eddy was in the perfect position to send a streamer of fog through the slot and over the Olympic Circle towards Pt. Isabel.

Anytime there is weak eddy flow or a weak marine surge be aware that the position of the eddy can change a lot from the forecast time to the time you reach the beach. So your best bet mid-afternoon is to watch the gap that feeds fog towards your site and make your own forecast update.