West Coast Wind Blog: Why is the fog sometimes over the towers of the Golden Gate and sometime below the roadway?

Blog.WeatherFlow.com > California & Baja > West Coast Wind Blog: Why is the fog sometimes over the towers of the Golden Gate and sometime below the roadway?
By Mike Godsey

Let’s send up a balloon for the answer! Weather balloon: Sacramento, CA 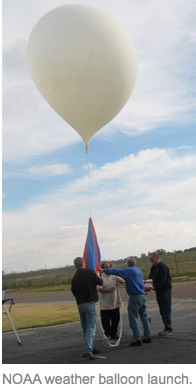 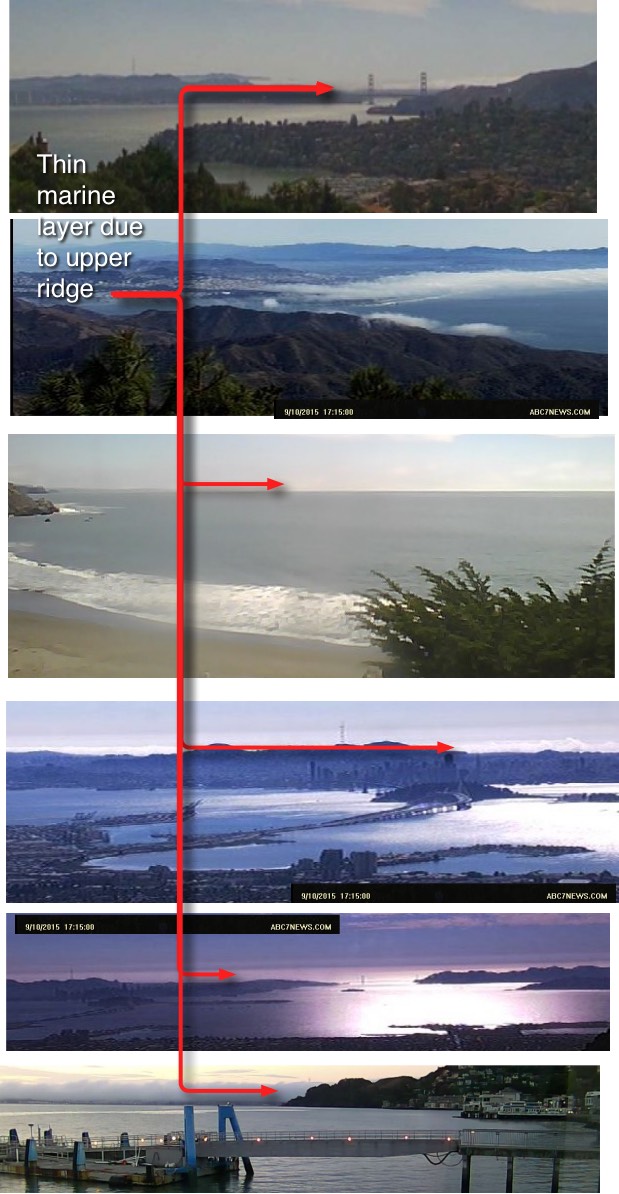 Whether you live in the S. F. Bay Area, Southern California or the Columbia River Gorge you can’t help but notice that the marine layer clouds often play a role in your wind. You may have noticed that at times there is no visible trace of these clouds, other times the fog layer is so thin that they are only visible along the coast and yet at other times they are a mass of low clouds that lunges over the coast range and deep into the interior.

Have you noticed that the strongest winds are usually a short distance to the east of the inland edge of the marine layer clouds? The marine layer depth impacts 3 critical properties of wind: 1. Where it will be windy. 2. How the wind will be. 3. how steady the wind blows. In future blogs we will look at each of those topics.

The last blog discussed the huge upper level high pressure area that has been over the entire west coast in recent days. The most obvious thing such an upper ridge does is to bring on a heat wave and to weaken the wind at most sites except for those on or near the California or Pacific Northwest coast. But beyond heating the air the descending flow within an upper high pressure zone also crushes the marine layer clouds.

If you go on a hike up Mt. Tam near the Marin coast of the Bay Area or hike up Dog Mountain in the Gorge on a deep marine layer day you can really experience how the marine layer works. Starting your hike at near sea level you will find yourself in moist cool fog. Then as you ascend up the trail you plod up through these cool clouds until you begin to see hints of blue above you. Finally emergimg at the top of the marine layer clouds you have blue sky aloft but you also notice the striking and sudden increase in the temperature. You just entered the inversion zone!

The air above the inversion warms as it is forced downward by the High Pressure. This warmer layer forms the cap to the marine layer clouds. The stronger the flow of descending warm air the more the marine layer clouds are compacted towards the surface. When there is a strong inversion in the Bay Area just stepping uphill a few hundred feet can bring you from mid 50’s air to mid 80’s air! 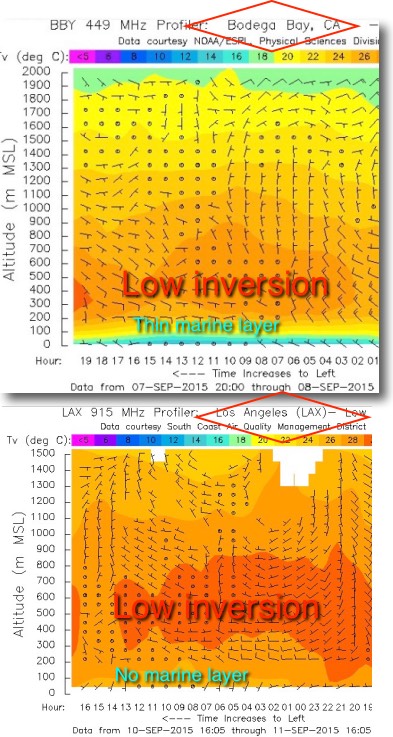 surface. So in regions like the Bay Area and the Gorge, with complex topography, this means the marine layer clouds are not deep enough to intrude very far inland.

The cam images on the left show the newly formed marine layer clouds and just how they looked yesterday, Sept. 10. These images are helpful for us to determine the current extent of the fog layer but they don’t give us all the information we need when we are forecasting because. 1.marine clouds only form when the boundary layer is moist enough to condense into visible fog. 2 local winds can make the marine layer clouds pile up so it is deep at some sites and thin at others. 3. The cam images are not very useful at 7AM when we do the forecasts since the marine layer may be
thinner or thicker when the winds actually arrive.

One fast tool we use to judge the marine layer depth and its trend is the 449 MHz profilers. The image to the right shows the profiler data from
Bodega, CA. yesterday. The bluish color shows the cool air of the marine layer. The orange color shows the warm air above the marine layer. The sharp transition between the two layers is the inversion which extends from near the surface up to about 1000 ft. Looking at the Y axis note that the marine layer was only about 75 meters thick yesterday. When we see asuch a thin marine layer we surmise that the wind will be confined to sites near the coast. And when we see a “hard” inversion like in this image we know the winds are likely to be steady since the dense air in the wind will flow over hills and quickly descend to the surface. One reason the Bay Area is famed for the steadiest of its summer thermal winds is the strong inversion that typically exists. The geese in the blog banner above appear to be flying right at the inversion zone.

So how do these balloons help in forecasting?  As the balloon ascends the instrument package records and transmits a host of variables including how the temperature changes with height to determine whether the marine layer will form and just how deep it will be.  One of the tools generated 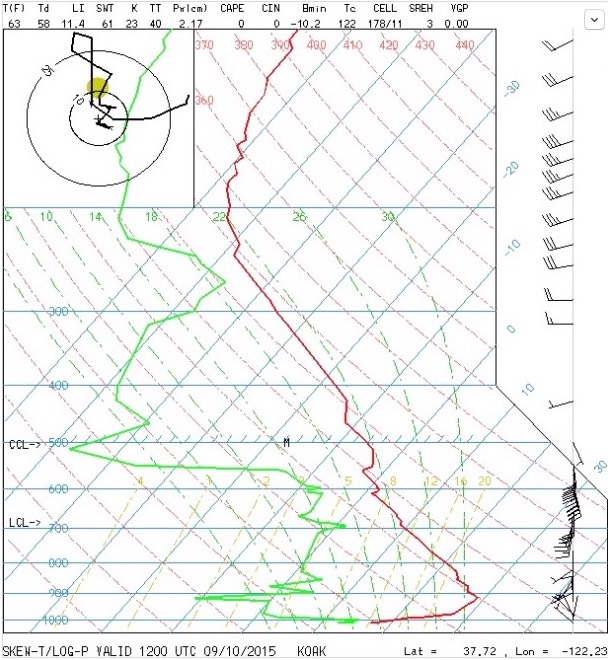 from the balloon data is the Skew -T chart.  Basically this is a plot of the temperature and the dew point profiles up to over 55,000 feet.

To forecast fog we just need to look at the layer of air closest to the surface. This is called the boundary layer and it is the layer of the atmosphere which is most influenced by the heating or cooling of the earth’s surface.

Along the West coast of the United States the California ocean current is very cool and so the air that comes in contact with it cools quickly.  The first thing we look for on the Skew-T chart is an inversion. That is where we have warmer air sitting above cooler air.

On the Skew-T chart an inversion can be found by looking for areas where the temperature plot goes to the right.  The top of the inversion is the
limit of where the surface cloud can extend to and will be the top of the marine layer fog bank.  If the inversion is really high the surface air can mix and lift and then an elevated stratus deck forms instead of fog.  If the top of the inversion is really shallow the fog may not be very high but it usually is quite thick.  For the last few days there has been no fog in Southern California and only the thin layer of fog in the Bay Area that you saw in the cam images above. Looking at the cam video to the right you can see that the very thin marine layer moved into the bay overnight yesterday but quickly retreated to near the Golden Gate and the coast.

With the strong high pressure and hot dry air at the surface there has barely been an inversion over San Francisco.  But gradually the air that has been sitting over the ocean has cooled because it has been in contact with the cool moist ocean. So we have a shallow layer of cool air below the

warm air and the Skew T shows that inversion sitting at about 1,000 feet.  We see the same set up over Bodega in the profiler data that is sampled from instruments at the surface every hour. With profiler data we don’t see very high in the atmosphere but plenty high for forecasting fog.

Between the cams, the profilers and the weather balloon Skew T plot we have a pretty good idea of the marine layer depth. Coupling those tools with satellite imagery of the clouds and numerical forecast models we try to forecast how far inland the fog will extend and how soon it will retreat.  But it only takes subtle changes for the temperatures to warm and the fog to dissipate.  So we are constantly checking all these tools so that we can give you the best estimate on when and where the fog will be so we can time the arrival of the winds.

Given the inbound upper trough out in the Pacific you can expect a much deeper marine layer this weekend and a sequel to this blog about what causes deep marine layer clouds and the Sherman Island and Gorge winds to rip!