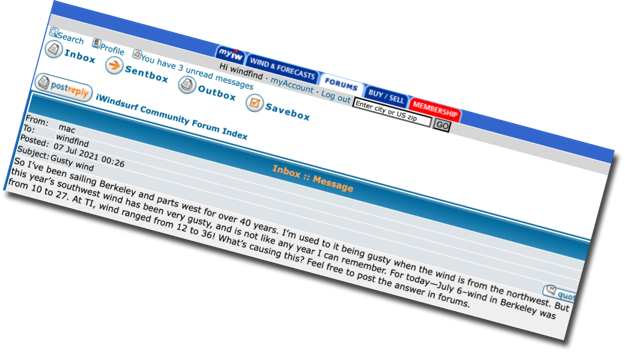 Ask any long-term windsurfer or kiter and they will tell you the Bay Area winds are changing.

For many decades there were 3 basic wind patterns during the summer.

The PULL of the Central Valley

A major factor in all of these winds was the pressure gradient to the Central Valley. The sunny skies in the Central Valley heat the land which heats and expands the air creating a low-pressure area. This low-pressure area sucks the ocean winds through the gaps in the Coast Range. Since the low-pressure is created over a very large area it is a very constant pressure gradient. And this means very steady winds as the gradient pulls or sucks the wind in a constant manner.

But slowly starting about 20 years ago the North Pacific High changed its summertime location and shape.

Very frequently this results in the North Pacific High pushing a lobe known as a ridge into far Northern California. This in turn makes the surface ocean winds west of the ocean buoys and the winds just aloft NNW rather than the historical average of NW winds.

Through a complex and difficult to predict process this NNW flow creates counterclockwise eddies of varying size in the area from Bodega to Half Moon Bay.

The PUSH of the Eddy

You can see these southerly ocean winds in this model animation for today, July 14, 2121. Find the center of the eddy and the NNW winds on one side and the southerly winds on the coast. 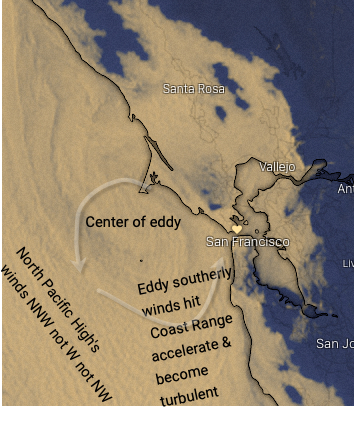 Notice how these southerly winds are accelerated as they are compressed by the Coast Range. The Coast Range also make these southerly wind turbulent so the normally steady winds associated with the marine layer become gusty as they are pushed into the Bay then the pressure gradient to the Central Valley sucks these gusty winds to the launch sites.

So think of our normal winds as being steadily PULLED towards the Central Valley. While the eddy winds are PUSHED against the Coast Range and into the Bay.

Hence when you see an eddy in the forecast expect the winds to be more gusty than usual. And since eddies are becoming more common we have more gusty days.