West Coast Wind Blog: Why such an epic day at Lake Lopez, California

A customer asked: Lopez lake had one of its best days of the year with +20 from before 9am and still going at 6pm. Clearly it had a typical 30 degree thermal, like so many days lately, but what else made the difference? The fog pulled back many miles from the beach. Pismo didn’t have any wind until 2pm, and then most of it stayed offshore. Thoughts? Thanks,
First, thanks for your report. Such reports really help us learn what to look for when forecasting for each site. This is especially true for sites like Lopez with complex topography which the models can not resolve. 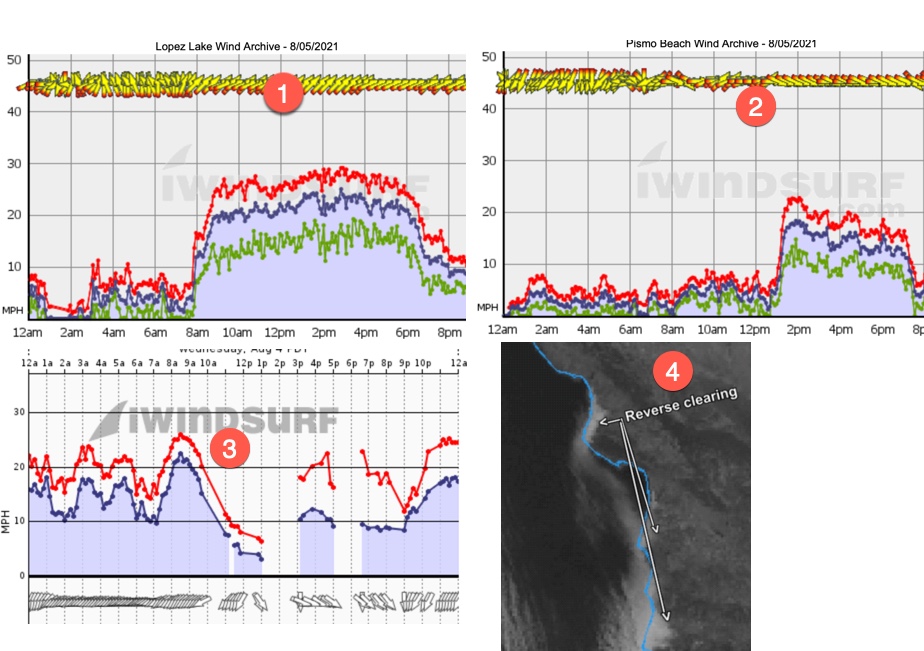 You are right about the temperature gradient and the resulting pressure gradient from the ocean to near Lopez. But why such strong and prolonged wind?
Here is my educated guess why Lopez had such an epic day as seen in #1 below.
2. The North Pacific High’s NW winds were relatively strong during the day but they did not reach Pismo #2 until about 1 PM so most of the AM wind at Lopez in the morning was the result of the local pressure gradient. But why was even the AM wind stronger than normal?
3. The North Pacific High was modeled to push a ridge into California which typically causes morning NNE to NE winds on the mountain tops north of Lopez. This wind battles with the thermal winds heading towards Lopez. Indeed, those NE winds #3 below, did hit 22 NE in the early morning atop Mt. Lowe. But as you can see they started fading fast almost exactly the same time Lopez winds began ramping up. Later in the afternoon the lack of NE winds aloft allowed more of the NW coast winds to curve towards Lopez strengthening the winds a bit.

4. But I think a more important factor in the late afternoon winds was the Reverse Clearing pattern you see in #4 below and in the animation, I made below that. Typically the marine layer clouds begin retreating from the Lopez area in the morning and as the land heats the temperature/pressure gradient creates a local thermal wind. But in a  Reverse
Clearing pattern clouds linger inland while the ocean clears. So having the marine layer clouds in closer proximity to Lopez in the late afternoon helped the PM winds.
All the above is just a retrospective hypothesis. To begin to prove the hypothesis I would have to see if I can forecast such conditions in the future accurately.
Hope this helps you some!
Mike Godsey
August 6, 2021in California & BajaBy Mike GodseyMore from Mike Godsey