What is a short wave and how can it affect winds?

Blog.WeatherFlow.com > Southeast & Gulf > What is a short wave and how can it affect winds?

A “short wave” or “shortwave trough” by definition from NOAA is, “A disturbance in the mid or upper part of the atmosphere which induces upward motion ahead of it. If other conditions are favorable, the upward motion can contribute to thunderstorm development ahead of a shortwave trough.”

They tend to be kinks in the ridging (High pressure) pattern… or in a trough (Low pressure) pattern. Short waves are mostly either caused by a cold pocket of air aloft or can be an entire upper level cold front. This causes the atmosphere to bend, or fold, as cool air sinks and warmer air rises – like a wrinkle where a subtle counterclockwise turn is able to cause some shiftiness to the air. Along the SC coast, these short waves can be visible as areas of mid level strata (more of  a blanketing effect of clouds nearby or overhead) with a bit of low level cloud debris from time to time. Although the untrained eye wouldn’t know what to look for, a sudden build of convection underneath the strata as they come onshore might be a signal of its presence. For forecasters, these can be best tracked at the 700mb-500mb ranges.

Below is a representation of a shortwave trough… and more developed pressure trough where a front might form. Source : http://www.theweatherprediction.com/habyhints/14/

On Friday, May 29 2015, we had an offshore kink in the Bermuda High pressure coastal ridge where a short wave trough strengthened as it came ashore and did some damage to the wind field.

Let’s take a quick look at the surface map (this map was originally edited for an extended forecast purpose to the Chucktown Wind Report): 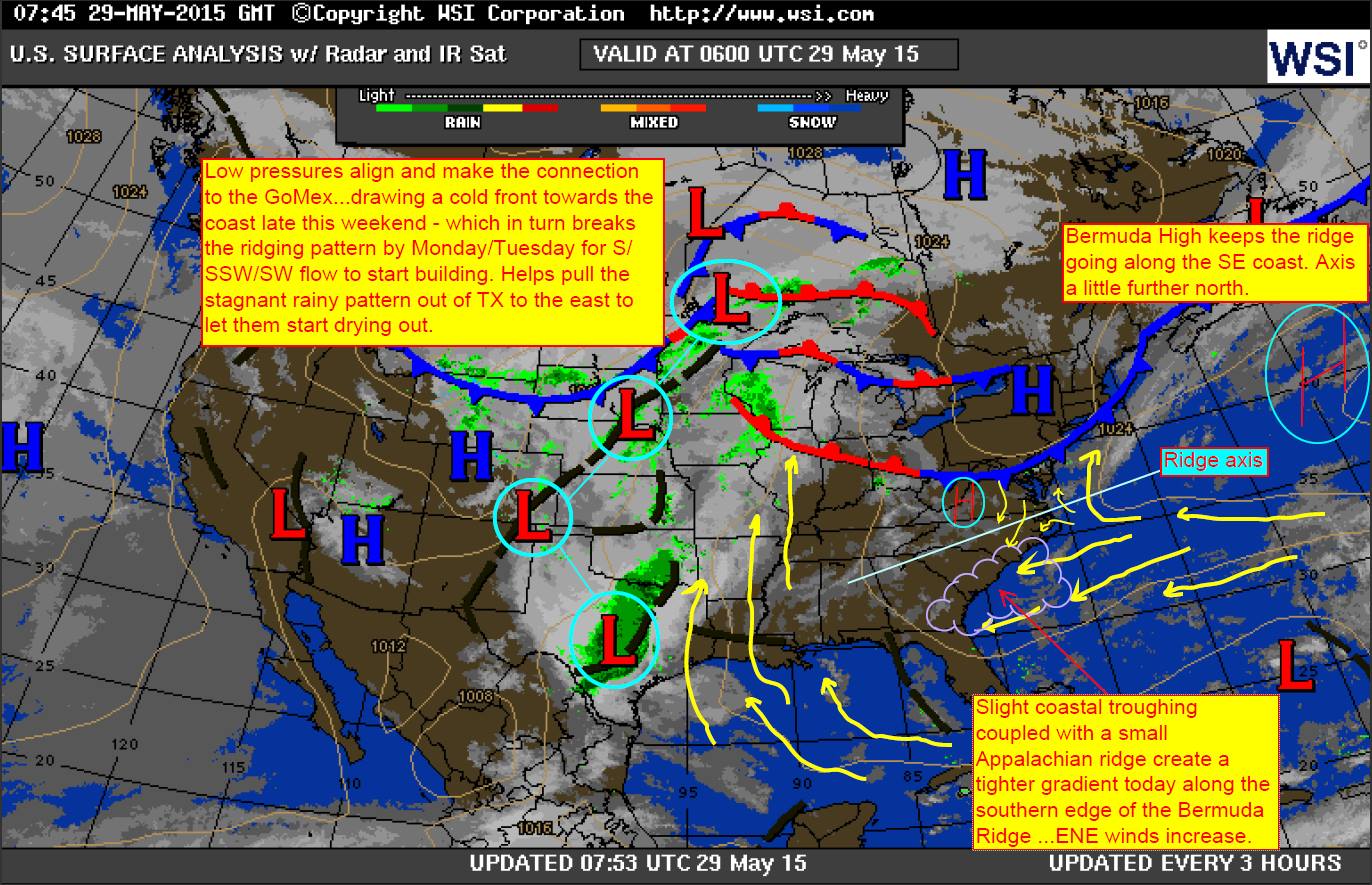 Before this happened, we had a fairly solid moderate NE/ENE flow along all 3 beaches (Isle of Palms, Sullivan’s Island and Folly Beach).  This was forecasted and was showing up as scheduled… 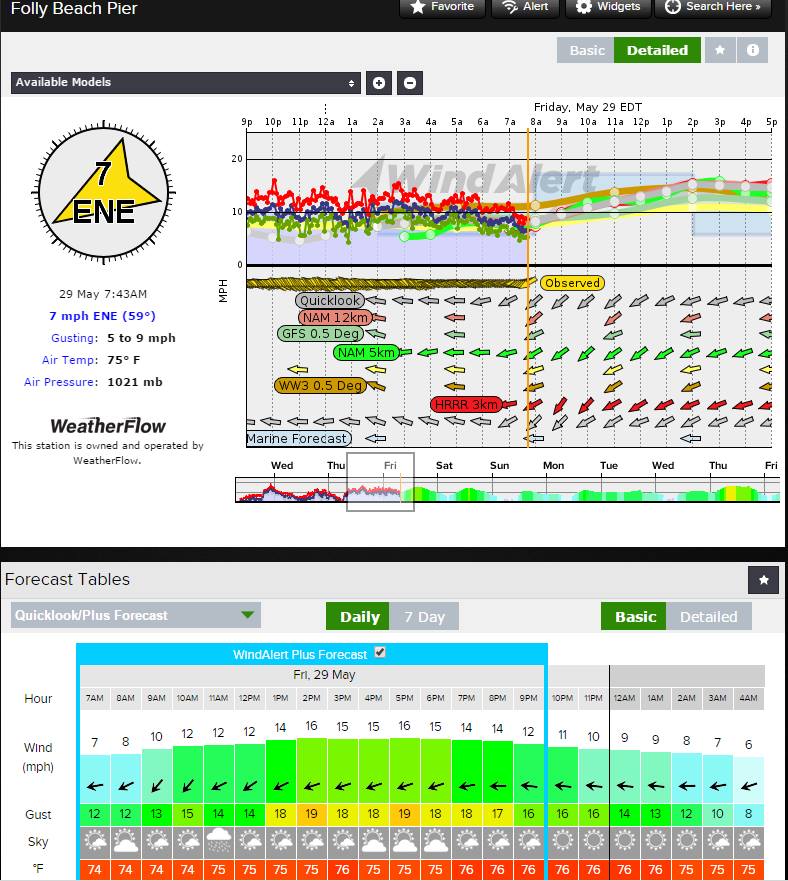 IOP really getting under way by 1:30pm a little above forecast values: 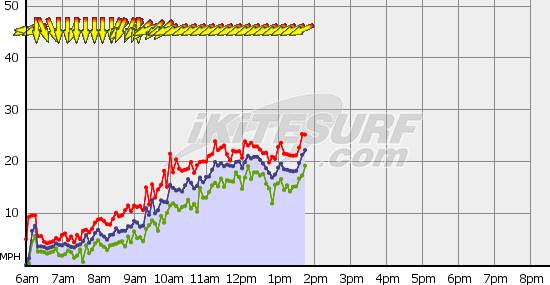 And here is the SPC surface map of the short wave as it neared the coast – you can see the NNE/NE winds slightly turning counter clockwise as it bends into the coast: 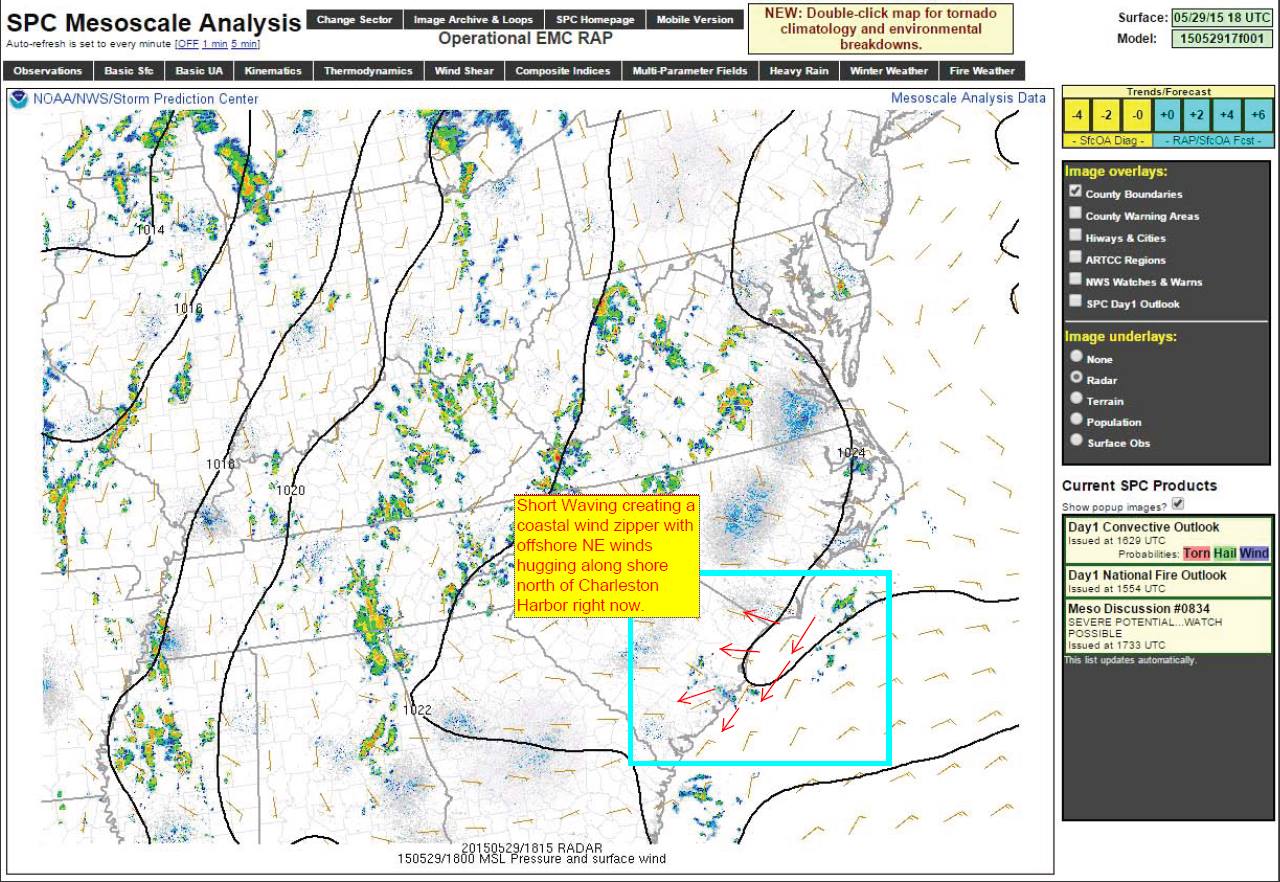 Looking back at the surface map from the beginning, the Appalachian High pressure was somewhat retrograding (spinning down into) into the Bermuda coastal ridge, which allowed a short wave trough to develop near the coast. Then the elevated 18/19kt immediate beachside ENE Sea Breezes (with cooler air advecting down over the warm waters) pulled the area of troughing into the coast at a faster rate over hotter land and developed low level convection (mild shelving) below the mid level strata. It’s almost as if it got “sucked” or “drawn” into the coast by the land heat interacting with the cooler upper pool of cooler, moister air.

Here are visual photos of the occurrence – you can clearly see the mid level strata overhead with the small area of low level convection firing off just inland west of the beaches over Mt. Pleasant. And you can see where the air dries out to the right (or east over the ocean) behind the short wave.

As a result, winds shifted to offshore NNE’rlies and weakened north of the Charleston Harbor closer to this area of convection. Here is a mobile screenshot via Wind Alert of all the sensors showing that trend…with Folly Beach still going ENE at 17kts. 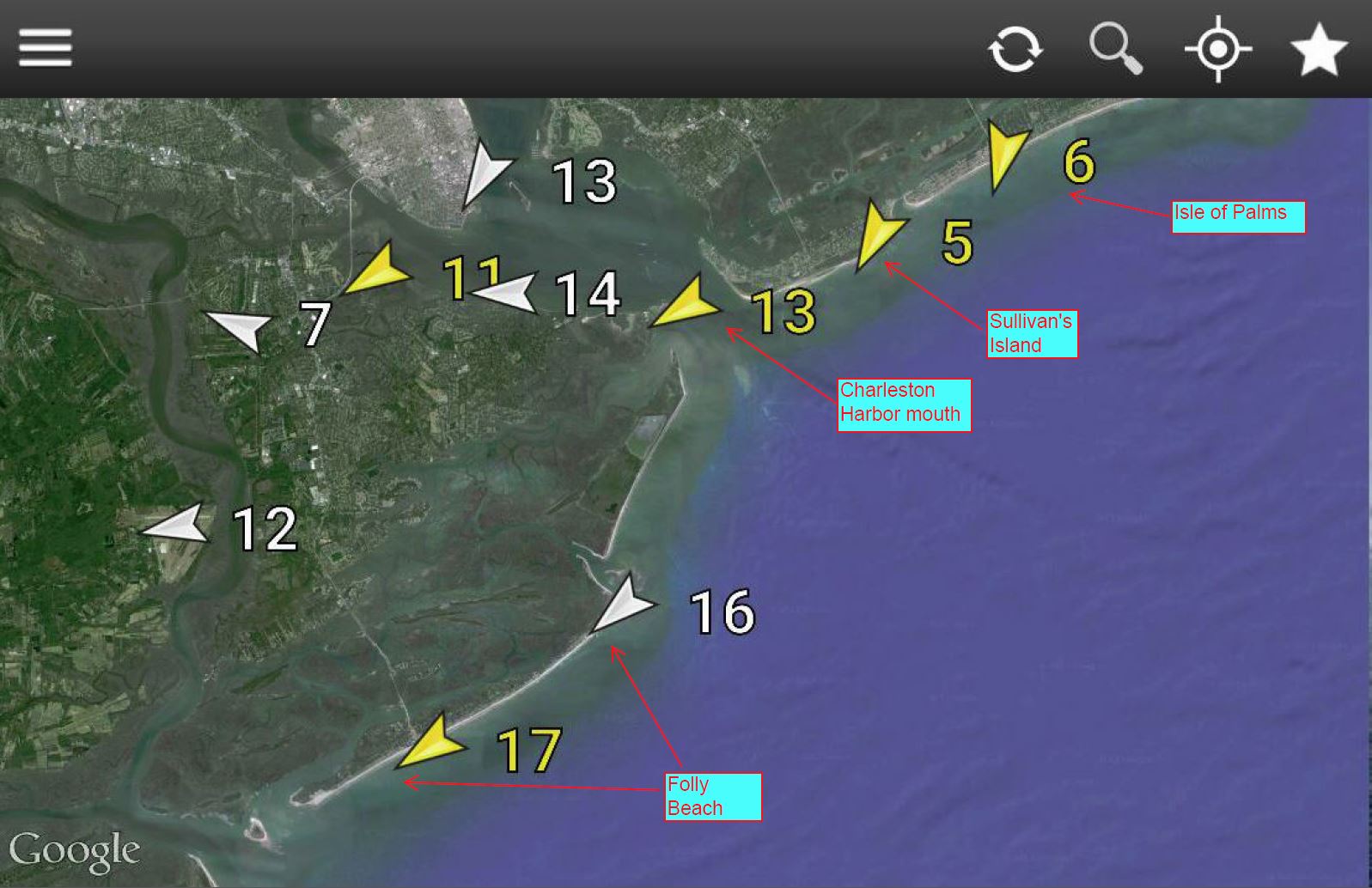 Here is the Folly Beach graph for the day – wind forecast held up pretty well: 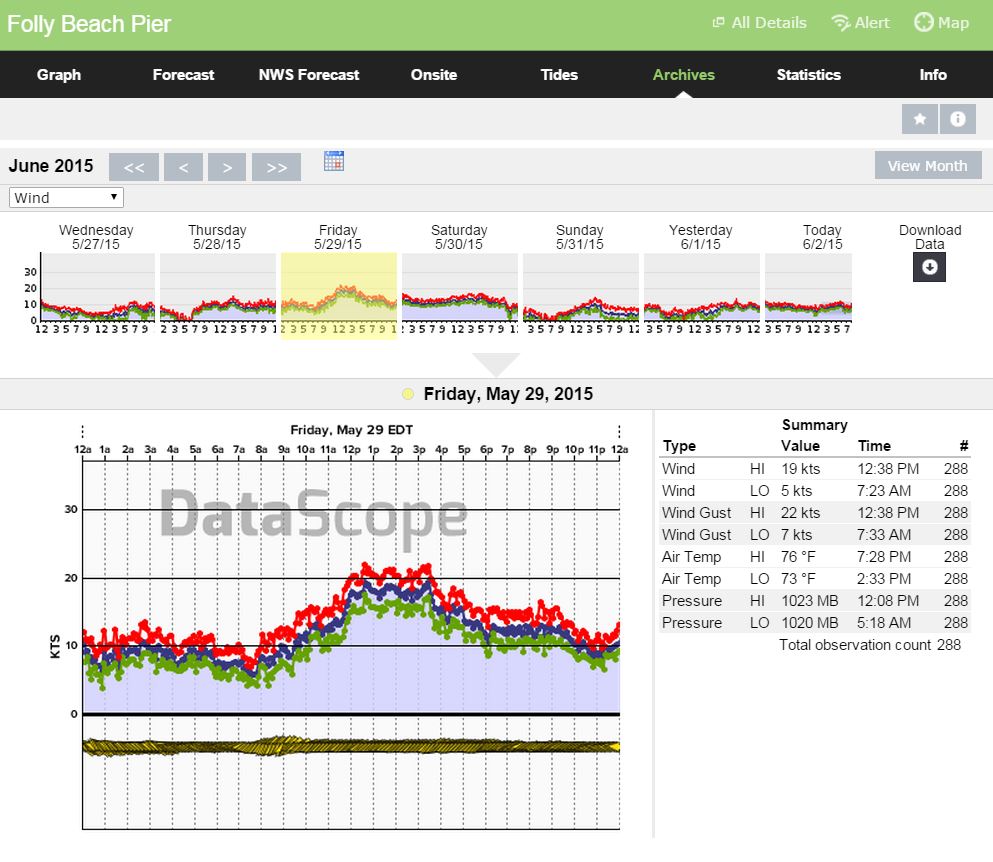 And here is the IOP graph for the day, showing the struggle as the short wave cut off the flow. It did make an effort to come back once the wave passed further west…but never fully recovered since the air had cooled and the ENE Sea Breezing was not as strong. 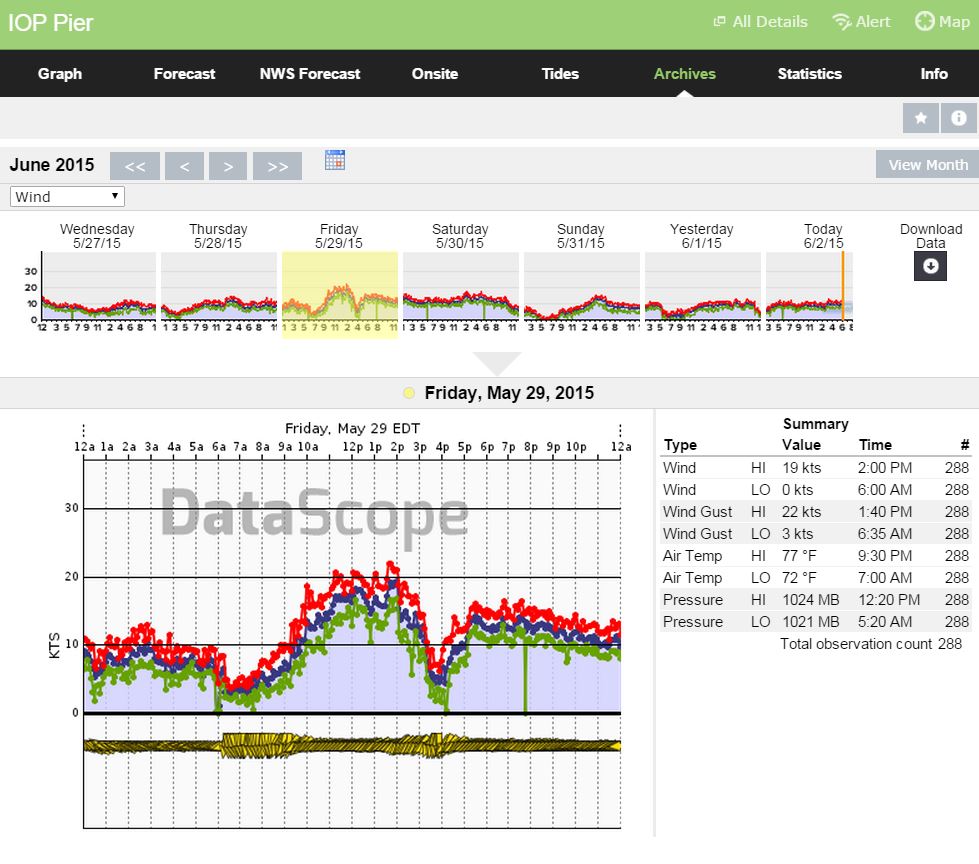 This is one of the first times I’ve ever been able to visually catch a short wave pinching off the flow overhead to a specific locale.  And…while pushing the tighter gradients south of the harbor (Folly stayed fairly elevated on track with only mild short wave effects before the expected late afternoon fade due to) and down towards northern GA. Usually these stay well inland where the Appalachian mountains cause kinks in troughs, stay just offshore where temperature differences over water hold them, or are more unnoticed overhead due to widespread clouding/raining and variable wind speeds making them difficult to catch.

One thing is certain – they do affect the wind field the closer they are by either making a onshore or offshore shift, depending on where you are and if you are caught in its web. Short waves are a very subtle but important piece of information in forecasting – and not to be taken with a grain of sea salt. 🙂