Gulf Stream surge brings the Cannonballs back early in 2015.

Last year, we saw the Cannonball Jellyfish arrive as Sea Surface Temperatures (SST’s) climbed into the 70’s at the beginning of May. This year- they arrived earlier- specifically April 11th/12th along a ENE flow from a nearby surge in the Gulf Stream. Other than being a delicacy in Asia and being only allowed to be harvested in southern Georgia, USA, the significance of their arrival along the shore not only has to do with a fairly strong wind event blowing them in… but also has quite a bit to do with wind forecasting as a visual confirmation of water temperatures rising to just at or near 70° (ideally 73.6° for our little friends… give or take a few degrees).

The Gulf Stream is a south-to-north driven surface current of warm water within a networking of Thermohaline Circulations (global conveyor belts of ocean water).  Surges in fresh water fluxes mixing with surface heat causes eddies, where the current at times meanders west along its northward flow and plumes warmer water outwards towards the coastline.  WeatherFlow Meteorologist and avid offshore fisherman Tim Kent stated “Cannonballs show with that warmish blue green water often and soon after the spade fish and Cobia arrive.  The first Pompano was caught this past weekend around here (near Charleston, SC) which surely signifies that the water is on the way up!”

It looks like this progressive surge in the Gulf Stream has elevated temps a little faster this year to near 70° along the SC Coast as of 4/13/15. This animated gif image spans from March 24 to April 13 of 2015. Surface Temperatures along the Gulf Stream are currently right at 80° – 82°…and the northwestward surge brought coastal temps from the upper 50’s up into the upper 60’s…and still climbing.

For forecasters, it is very important to know for winds and how they behave along the beaches.  One issue we deal with is much warmer air temperatures building over our cooler shelf waters during the seasonal shift – which causes marine layering (with frequent fog blanketing over the water) until water temps rise to a level where that doesn’t happen anymore. Cooler waters cause winds to “decouple” or stay capped to more stable lower speeds than what would normally take place on warmer Southerly winds – especially ahead of cold fronts that generally elevate winds ahead of them.  Quite simply…it makes wind forecasting very problematic to get the speeds correct along beaches versus the inland values and other areas where winds “funnel” through between land masses-  such as coastal breaks (harbors, bays, sounds) and/or upriver locations. Here are examples of how this affects the winds:

Marine layer with a blanket of sea fog along Isle of Palms 3/4/15: 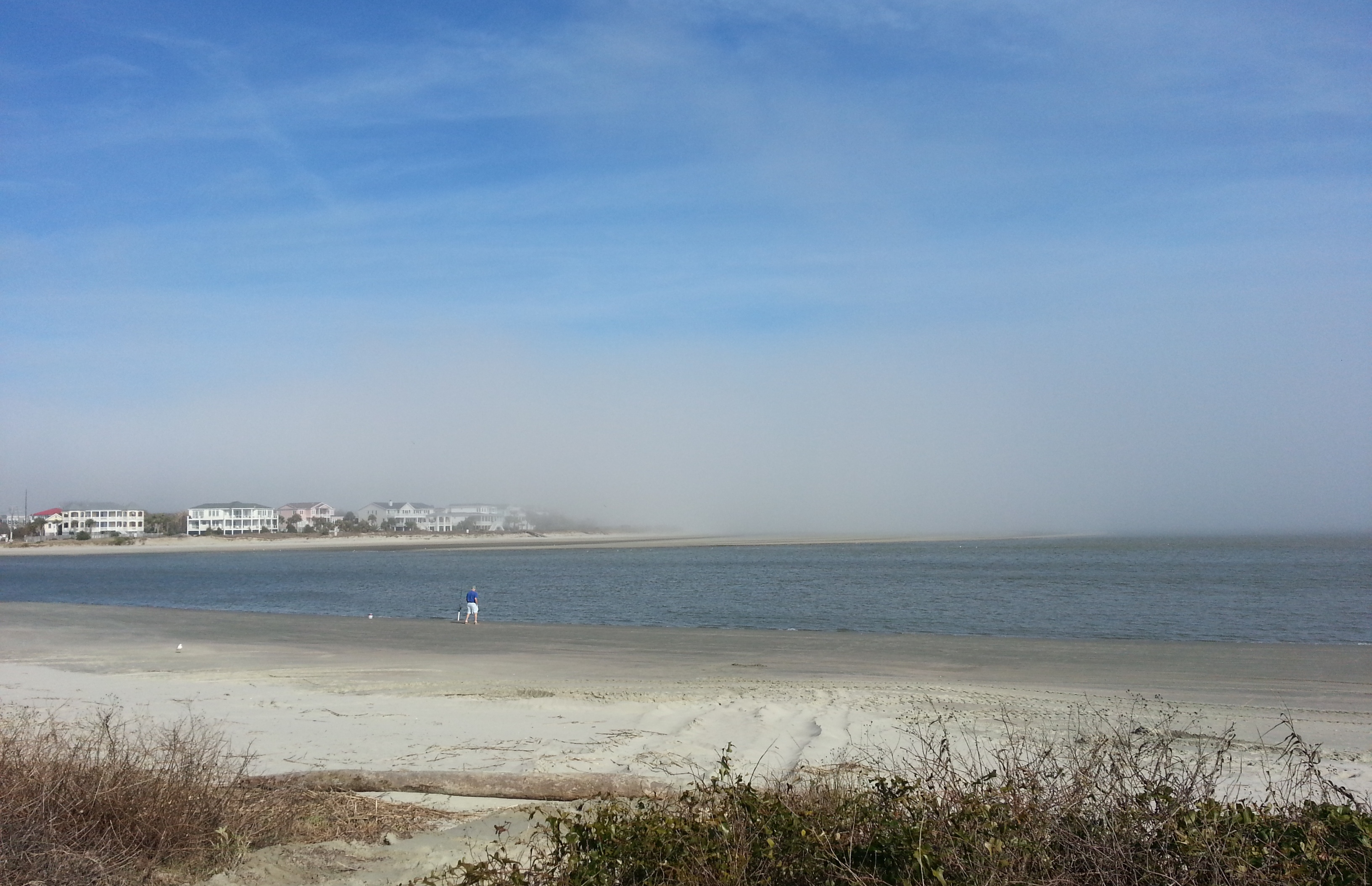 Here is what was occurring with the winds in the morning, which continued through most of the day (actually built higher in the harbor). It is almost a very clear line that I consider a “line of delineation” where we see near 10kts at the beaches and 14+ knots in the Charleston Harbor:

During experiments riding back and forth across it on other days, there is a distinct drop in winds within  a very short distance – perhaps as short as 50-100 yards as you move into the decoupled area.

March 5 showed even higher afternoon results where the decoupling occurs- with 23-27kts SW in the Charleston Harbor and only 11-14kts SW along the beaches:

As in the original article, we will see Sea Breezing become stronger along beaches as these SST’s continue to climb in conjunction with our seasonal rising warm air temps. With just a few more degrees, our local Sea Breezes that couple with synoptic Southerly winds will allow for better surface mixing and instability, which in turn creates more wind. As a result, forecasters will have a better reading on what speeds are likely to occur along the immediate beaches.

The bottom line is that Cannonball Jellyfish, at least here along SC, are one of those neat environmental visual queues that thermal imaging satellites and all the advanced swathing in the world can’t catch – at least not yet. 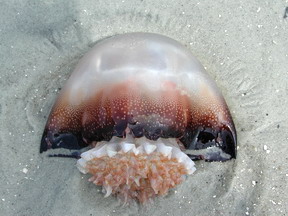