Life Cycle of a Thunderstorm and Wind Implications 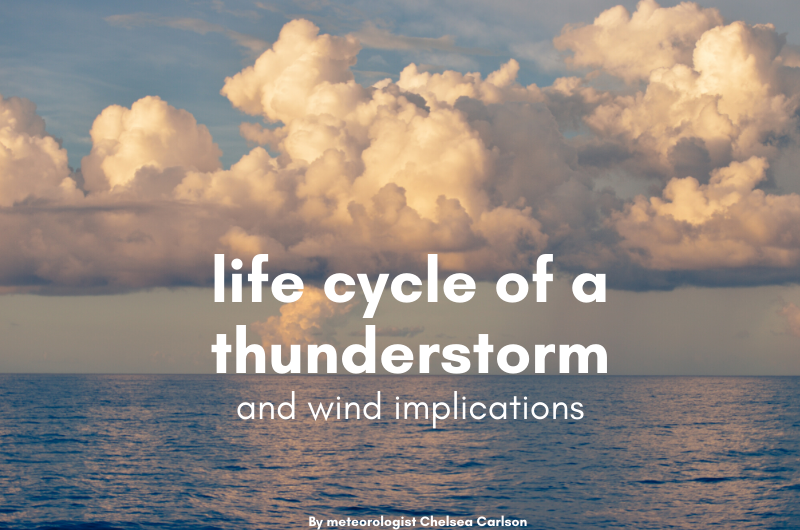 We’re rapidly approaching that time of year when the heavy taps of rain and rumbles of thunder outside are sounds you can set your watch by. Those in the south are first to notice the transition from late-Spring cool fronts to humid stagnant air and the ritual of afternoon thunderstorms.

But why do thunderstorms seem to pop up at the same time each day in the Summer?

Do you ever notice they often spawn in the same geographic areas just inland from the coast?

How does this affect the winds at the surface where we kite/sail/surf?

(These are the exact curiosities that paved the way for my degree in Meteorology…) So let’s dive in!

How Does a Thunderstorm Form?

Just like baking a cake, there are atmospheric ingredients we need to form a cloud, which eventually grows into a thunderstorm.

One of the major ways that air rises is due to the land heating up through the day (also known as differential heating from the sun).

Moisture in the air most often comes from the ocean, usually by way of the sea breeze blowing cooler air from the ocean towards the hotter land.

Where Do Thunderstorms Form?

In the southeast United States, we have plenty of these two ingredients. It gets quite hot in the summers, and there is plenty of moisture from the warm waters of the Gulf of Mexico and Western Atlantic (including the Gulf Stream). Florida has the highest incidence of thunderstorms in the U.S. (I grew up in the lightning capital of the country: Tampa Bay area)

One common place that’s a hot spot (literally) for thunderstorms is a sea breeze convergence zone.

This is where the coastal sea breeze (moist air from the slightly cooler ocean) converges with the inland prevailing winds from the opposite direction (which is slightly drier and much hotter air). This can occur on a singular coastline and often does along the Gulf Coast and East Coasts of the U.S each summer afternoon, usually around 2-4pm. On a peninsula like Florida, we can even get a major convergence zone in the middle of the state where the west coast sea breeze meets the east coast sea breeze if each is strong enough. 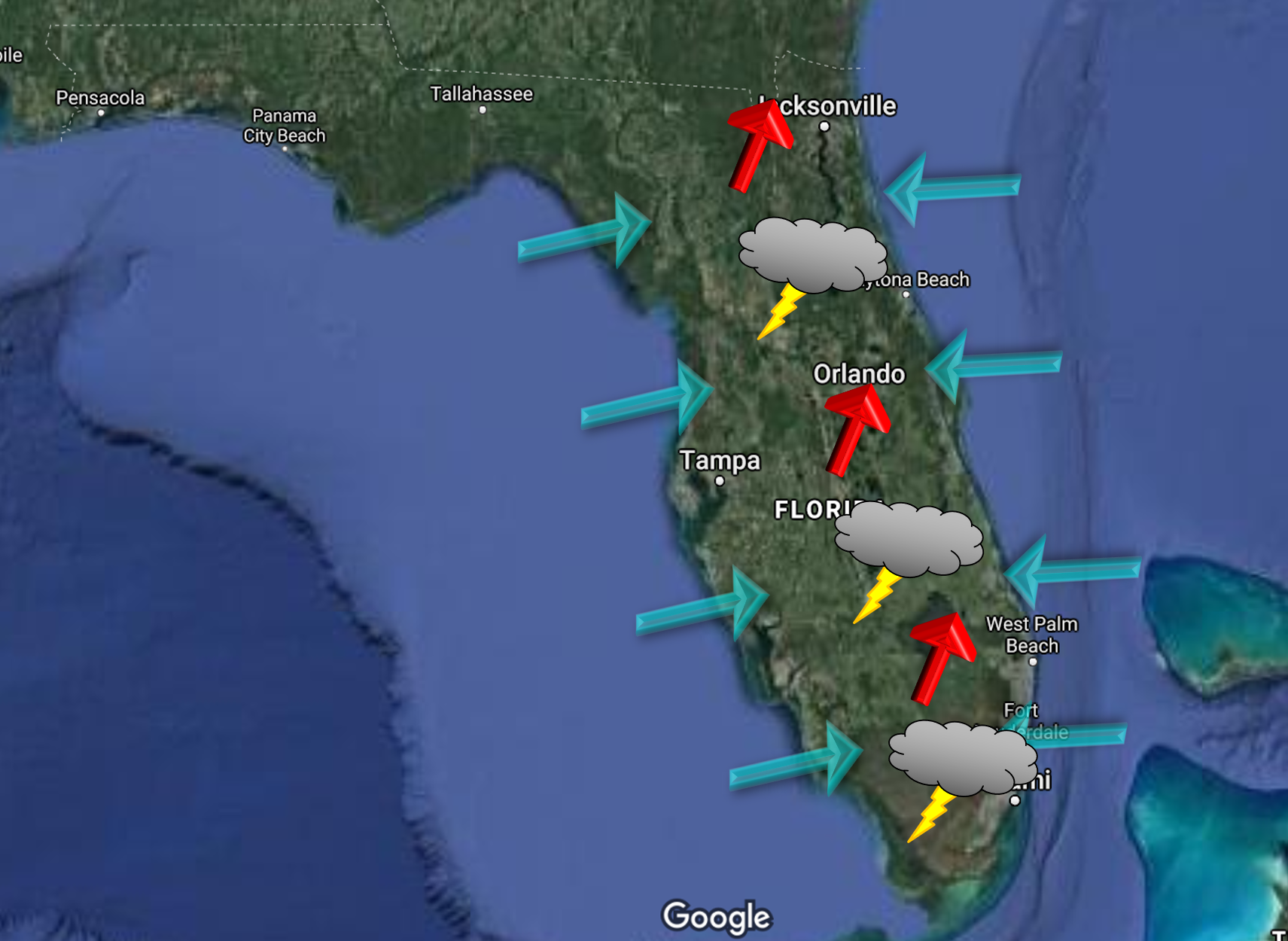 So when the air masses converge, the air has nowhere else to go but up. The air condenses and forms clouds. If there is enough rising (read: heating) and enough moisture, the cloud will continue growing taller and taller. This leads to the first stage of the thunderstorm.

Note, to make this simple, we will just examine a single-cell thunderstorm (not supercells, multi-cell complexes, frontal boundaries, etc.)

With enough heating, air will continue to rise in the cumulus cloud as an updraft. During this stage, air from the surface is rising and creating a lumpy, billowing top to the cloud.
→Wind implications for water sports

The updraft causes winds to be much lighter directly underneath the cloud and the best wind speed is always on the outside edge of these clouds.

The cumulus cloud has ingested so much moisture it has become saturated- so much so that it starts to rain. The area where the rain is falling is part of the downdraft. Yes, the updraft is still there too! So, in the mature stage, the thunderstorm has both an updraft where air is being pulled into the cloud as well as a downdraft where it is flowing down and out.

BOOM! What about thunder and lightning? Lightning develops when ice particles scrape together within the updraft & downdraft cycle and create a net positive charge at the top of the cloud. The bottom of the cloud and the ground become negatively charged, and eventually this large charge difference builds up. Like magnets attracting, the positive charges really want to connect with the negative, and when they do, it gives us a lightning strike! If the thunderstorms are severe, they can also cause hail and waterspouts over water. Safety tip: Make sure you get National Weather Service Alerts on your phone, and when thunder roars, go indoors! Remember, lightning can strike up to 10 miles away from the rain.

In the area of the updraft, wind is blowing in + towards the storm, and winds here can often be quite light. The strongest breeze is at the edge of the downdraft (which is on the edge of the rain), where the air is cooler and blowing out + away from the storm.

Eventually, the downdraft of the storm will overpower the updraft, and the cell will “rain out” all its moisture. The cumulus stops growing taller and wider due to the updraft being cut off, and you often end up with just hazy rain and a cloud top left.

There will be very little wind left in the immediate vicinity of the cloud after the intense rain has stopped with the downdraft. The downdraft will eventually weaken too, and there may be a period of no wind at all until the prevailing gradient wind returns.

Figure 4: LEFT: The dissipating stage of a thunderstorm life cycle a dying downdraft with no updraft Source: UCAR/COMET Program.  RIGHT: A dissipating thunderstorm as seen from an airplane. Source: Chelsea Carlson/SeaTactics

If we are sure the cloud doesn’t have thunder & lightning, we can use these tips as cloud strategies for our sailing and kite-surfing adventures.

Have you ever been around a thunderstorm throughout an entire life cycle? What kind of winds did you notice?

Let us know in the comments!

Chelsea Carlson is a meteorologist, lifelong sailor, and educator. With questions or comments just ask for Chelsea at: WeatherFlow Support