In weather, the “Northeast Wedge” is no unfamiliar guest to us that live along the Eastern seaboard of the United States that see elongated periods of driving NE winds and beach erosional processes. We frequently see the wedge setup as High pressures position themselves to the north in a winter-like pattern and “wedge” cooler air down behind cold fronts as the boundaries exit the coast out into the Atlantic. There they become offshore troughs, where interaction between this troughing and High pressure tighten the gradient …and winds elevate.

This blog is about a feature that frequently occurs within the life cycle of the NE Wedge called a “short wave trough”.  According to NOAA, this is, “A disturbance in the mid or upper part of the atmosphere which induces upward motion ahead of it. If other conditions are favorable, the upward motion can contribute to thunderstorm development ahead of a shortwave trough.”  (also see my focused blog on what Short Waves are from June 2, 2015 here: https://blog.weatherflow.com/what-is-a-short-wave-and-how-can-it-affect-winds/ ).  These can occur where W’rly or SW’rly winds aloft move (lifting) moisture along frontal boundaries positioned to the south of these wedges.

The Sperry Charleston Race Week 2016 was this past week from Thursday, April 14 through Sunday, April 17.  I was on the forecasts through our SailFlow application and our other products (WindAlert, iKitesurf, iWindsurf and FishWeather) for those several days. Our NE Wedge began along South Carolina on Wednesday and lasted the entire time slot through Sunday, April 17.  Even though Thursday’s forecast went very well and morning clouds fizzled to a dry line at the coast and elevated ENE backdoor Sea Breezing occurred; however, things got a bit shaky on Friday with the forecast as rains/showers stuck around and a positively tilted shortwave trough developed just offshore.

In this case, an undulating front (stationary west-east cold front) laying across northern Florida and into the Atlantic was providing the Gulf moisture feed. Here is the video forecast where I explained the current setup and talked of the Gulf moisture push from the west…but never mentioned the short wave development. Doh!

This is a standard phrase you might see from us in our forecasts during these NE Wedges – this one from actually the day before that I mentioned as part of due diligence (and weariness from being tricked by it before): 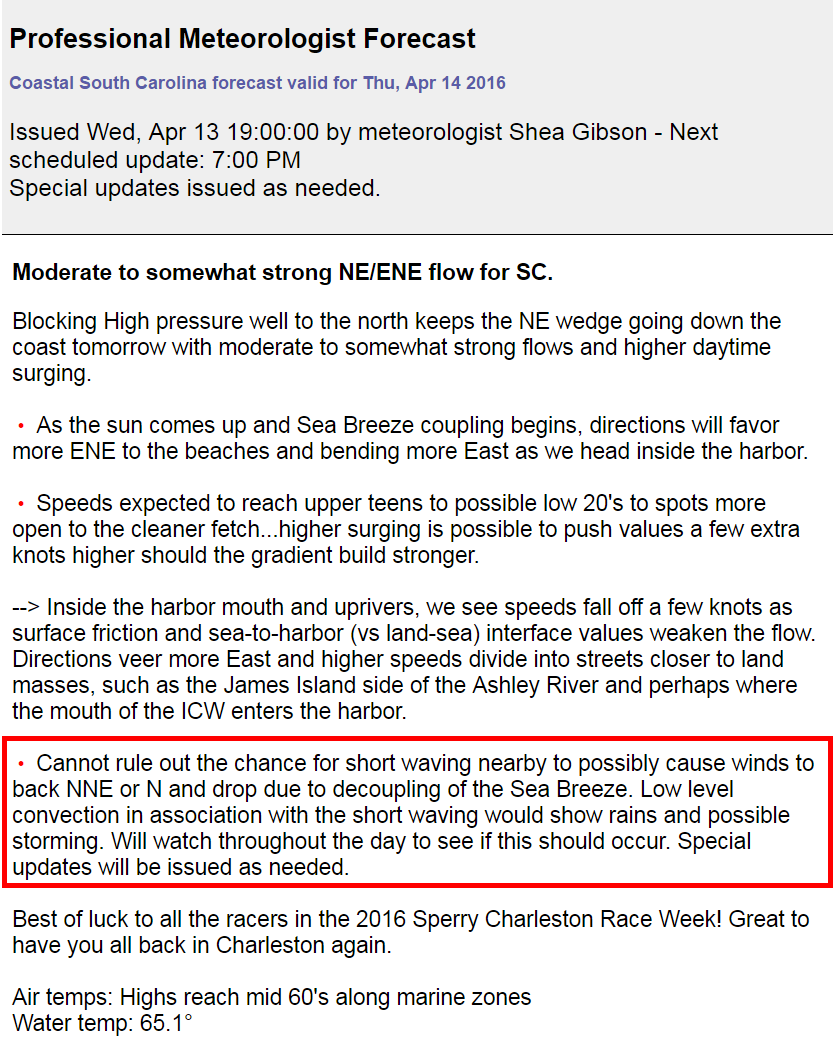 So here was the Pro Forecast in our apps and products at 7AM..no mention of it as I had the day before. Confidence was (too) high for clouding/rains to break up and ENE Sea Breezing at the coast. Even though I did keep the mention of rains sticking around, the wind directions and speeds were the point of focus. 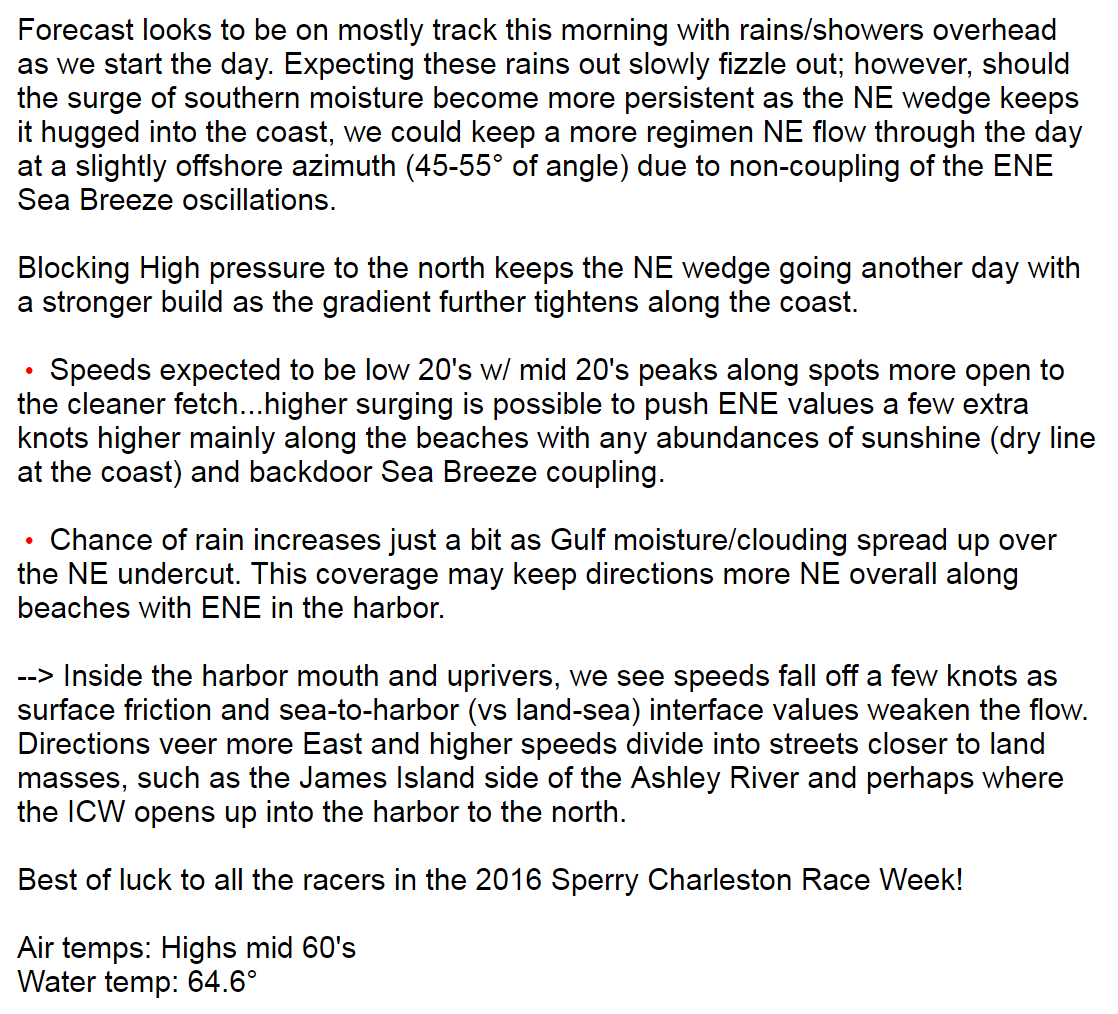 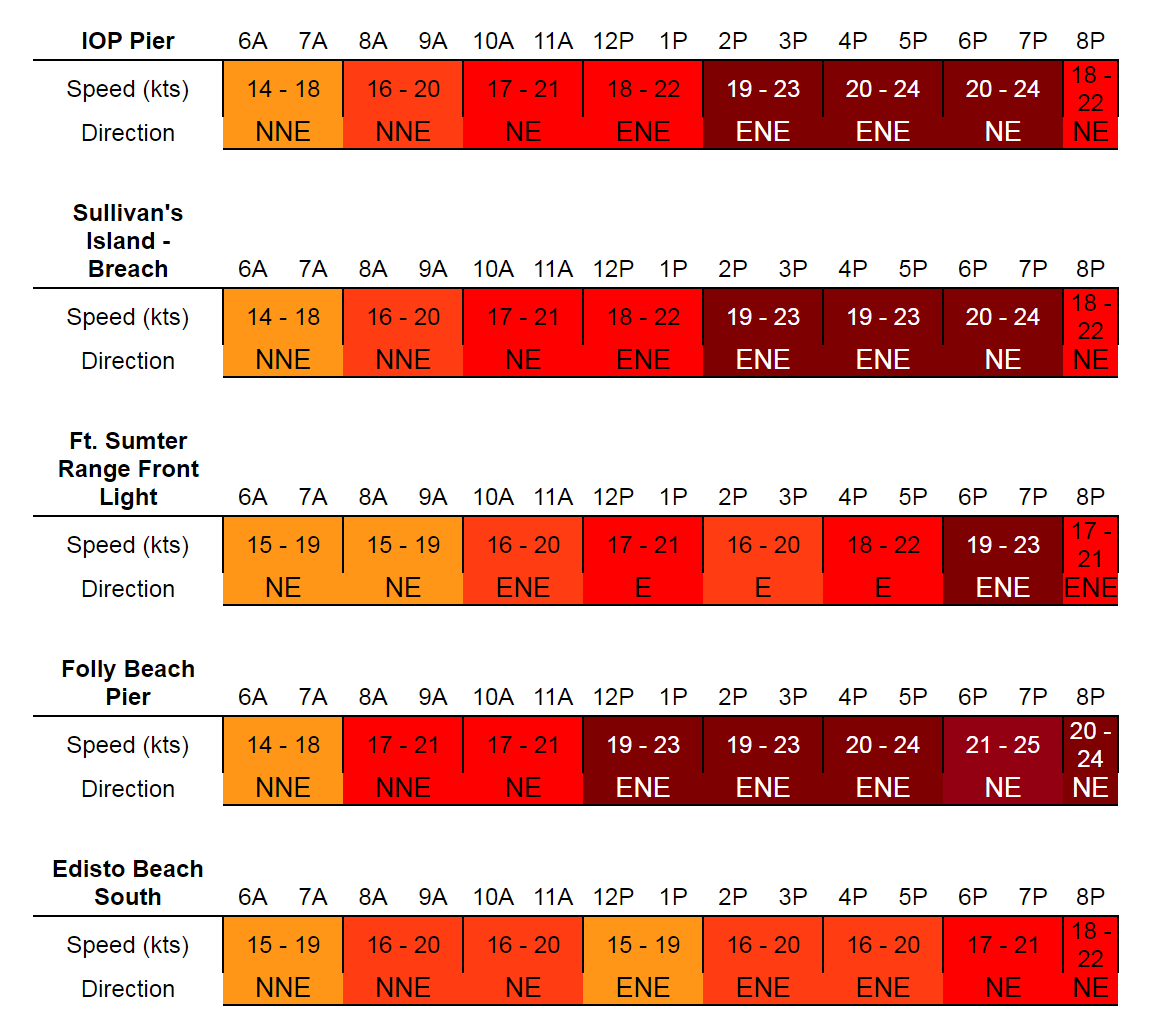 And here is what happened during race times from morning to early afternoon (SPC Mesoanalysis from ~2:00pm): 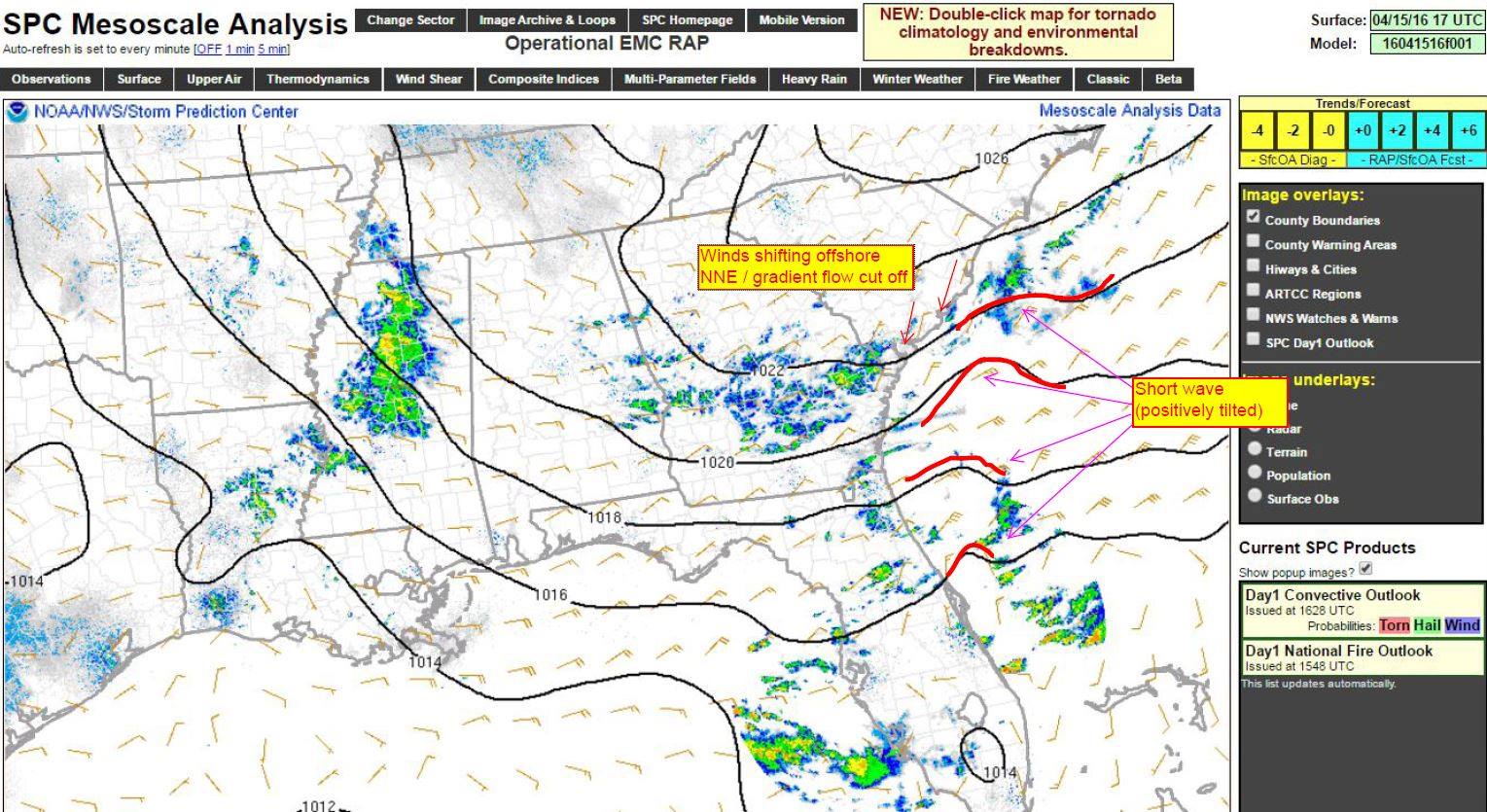 A little after this post, the short wave started to loosen its grip offshore – but clouds and a few sprinkles did stick around. You can see where the winds turned side-side and started to crank up along the beaches once the Wedge paralleled the coast. 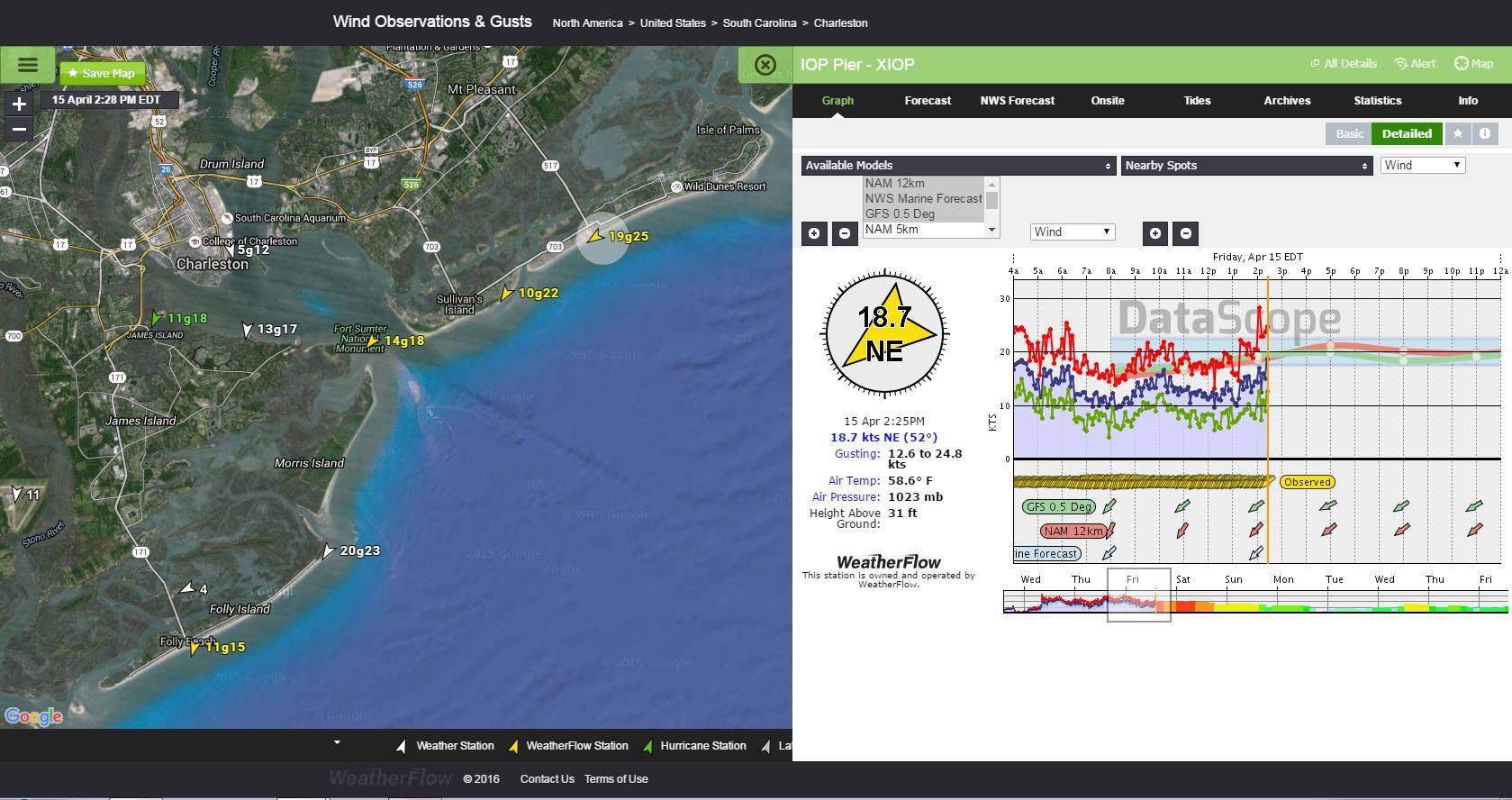 And here is what happened in the Charleston Harbor at our Fort Sumter Front Range Light sensor for the day:

I fell well below forecast values and was off two entire cardinal directions (NNE vs ENE) through the morning and into the early afternoon hours until this situation was resolved by mid afternoon.  Pay close attention to the times between 2:45pm and 3:00pm once this began to straightened out. Notice the jumpiness due to an unstable gradient and lack of sunshine. With sunshine, this day was originally forecast to be the strongest in this period by the NAM5k and the GFS 0.5, to reach speeds of 30-32kts with gusts in the mid/upper 30’s, so we got lucky and topped out around 30kts later after the races. With the offshore gradient being so strong just a mile or two out near the jetties, the earlier offshore races were cancelled as winds/waves were too high for the racers to effectively compete in.

Bottom line is….even though the afternoon “straightened” out and met values, the morning forecast was mostly a bust due to letting the guard down on the short wave troughing feature that was already showing the night before.  Should have stayed with it. That is why we learn and move on with the knowledge…and take our whoppers at times in the process. A common these is that weather is uncertain; however, we are getting better and better with frequent and steadily increasing observation technologies. To my fellow forecasters and colleagues, and as the headline of this blog reads, “never forget the short wave!”

Until next time – stay safe out there.