The Hwy. 92 gap and the pressure gradient to Redding

Blog.WeatherFlow.com > California & Baja > The Hwy. 92 gap and the pressure gradient to Redding
By Mike Godsey

Meet the nemesis of Coyote and 3rd. Ave. winds.

This blog is a work in progress but it is so relevant today that I thought I would at least post the graphics.

Sometimes you read in the forecast that the pressure gradient is strongest to Redding. And you  probably wonder how an areas so far from the Bay Area could impact our wind.

Basically the most common summer wind over the ocean is the North Pacific High’s surface  WNW to NW to NNW winds.

When those ocean winds are more WNW to NW the Peninsula receives decent wind if there is a good pressure gradient towards Sacramento or Bakersfield.

However anytime the North Pacific High’s surface winds go NNW there is a good chance that the Central Valley thermal low will center in the northern Central Valley towards Redding.

This means there will be a SOUITH to NORTH pressure gradient from the Bay Area to Redding.

So as the wind of the North Pacific High curves towards the coast and into the Bay it turns from NNW to W to WSW to SSW. and follows the topography towards Redding.

This curving process starts just outside the Golden Gate and continues in the central Bay and over San Pablo Bay. 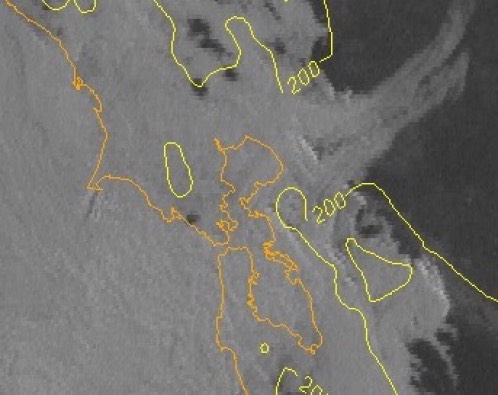 This means strong wind from the north tower of the Golden Gate to Pt. Isabel into San Pablo Bay. And if the S. to N. pressure gradient is too strong the wind bypasses Sherman Island and heads into Napa until mid morning or later.

But it you look at a relief of the Peninsula closely you will notice that there is a SW facing gap in the coast range from Half Moon Bay to the Peninsula waters. And with a SW push of marine layer wind this means that Coyote and 3rd. Ave. are likely to have unfavorable weak winds near shore. Which stops any
WNW from getting to the launch sites.

You can see this happening in this satellite animation.

Paradoxically the wind out at the channel marker may be N. during a SW push and Palo Alto is likely to see useful NW wind. To get the story behind this Palo Alto eddy go to blog.weatherflow.com/meet-palo-alto-eddy/