After long NW wind drought the Northern California coast is poised to rip next week! 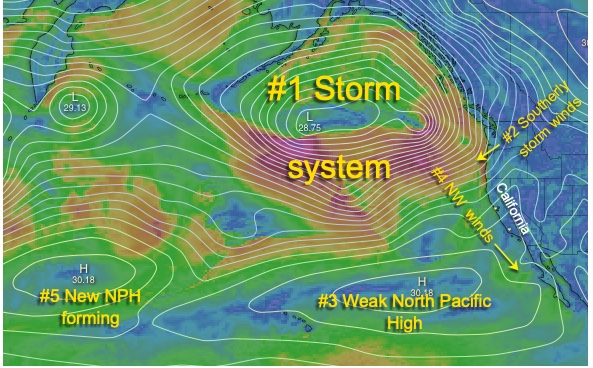 If you kite or sail near the Northern California coast you are aware that our typical NW clearing winds have been sparse this year. First, we had a prolonged Omega Block that kept low pressure just off our coast for over a week. And this week a huge storm system stretching from Cape Mendocino, California to past Alaska has brought only southerly winds to the Bay Area.

All of this action has kept the North Pacific High and its NW wind focused along the Baja coastline. In this first image let’s take a look at the current Pacific scene to see why the wind will be weak today through next Monday.

First, notice the isobars around the huge low-pressure #1 that dominates the northern Pacific. Then note #2 how the storm’s southerly winds are hitting the coast from Mendocino to Alaska. Meanwhile, a weak North Pacific High #3 is keeping its surface NW winds focused over Baja waters. Lastly, note the “new” North Pacific High that has formed near Hawaii.

The next image is an animation covering the days from Friday, April 5 to Tuesday, April 9.

Once again notice that there are 2 North Pacific Highs. Keep an eye on both of them as the days progress. Watch how the North Pacific High north of Hawaii merges with the one off Baja and how the combo greatly expands and move towards the California coast. The development is enhanced by convergence aloft by an upper ridge (which is a topic for a future blog)

Looking carefully you can see how the North Pacific High’s isobars tighten along the coast. And, at the same time, surface low pressure develops in the Great Basin and is enhanced by divergence from an upper trough (which is a topic for yet another future blog). This low pressure greatly enhances the strength of the NW ocean winds and encourages their flow deeper into the Bay Area. And all of this also jazzes up the winds just aloft over the Bay Area so expect a strong gust factor.

Remember all of this is a bit speculative. There is a chance that the North Pacific High will move a bit inland north of the Bay Area which would make the ocean winds a less favorable NNW wind direction.