In meteorology, like politics, instability sometimes wins over stability!

This, I know is true:

But… not this time!

“Times they are achanging”. Bob Dylan

“Life can only be understood backwards; but it must be lived forwards.” ― Søren Kierkegaard

So I set about doing an autopsy of Benjamin’s forecast which normally would have been a spot on forecast in these conditions. Of course, I have the huge advantage of 20/20 hindsight and the actual wind graphs which Ben lacked at 5:45 AM Saturday morning.

Part 1: Why the corridor fizzled and why the winds are going to be weak on the second day.

You all know how the Gorge is suppose to work.  A windless heat wave is followed by a massive surge of cool marine air and strong gusty winds from the corridor to Roosevelt.

But recent heatwaves have behaved differently with usable to even fun winds in the 4.7 to 5.3 range while temperatures were in the mid 90’s! (The reasons for that are interesting but for another blog.)

And normally in a post-heatwave pattern, the Hatch and Swell zone are not reliable in the morning until the clouds burn back then becomes strong and gusty in the afternoon.

So my plan yesterday was to watch the text reports from The Wall and go with the wind.

But as the texts came in it became clear that something was wrong out at The Wall.

And from my window, the Hatch became progressively worse as the day passed with only brief periods of useful strong wind. 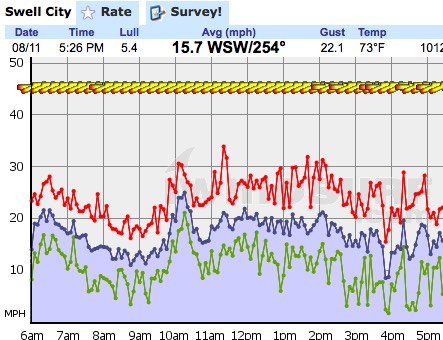 The wind graph at the Hatch for yesterday August 11. looks pretty miserable with gusts into the 30’s and lulls in the 2 to 3 knot range. True there were brief times of usable winds but overall the winds were even worse than the graph depicts

I put the first hint of the coming fizzle in one of my mid-morning “Bluff Reports” for the Hatch and Swell zone. I mentioned that the clouds were not draped over the walls of the corridor, like you see in this dawn image, which is normal when AM marine layer clouds clog the corridor.

Marine layer clouds are comprised of heavy dense cool ocean air so it hugs the surface and flows over obstructions. This makes for relatively steady wind. Later in the day, I used the Skyline Hospital time-lapse feature to make the following animation.

Notice at dawn the flattened appearance of the marine layer clouds. An inversion of warmer air is compacting the upper surface of the clouds and because they are “heavier” than the air above them the clouds and the wind associated with them hugs the water.

Normally as the clouds burn back and the desert heats and the pressure gradient climbs this dense air would be sucked eastward and the wind would become stronger and steadier.

But looking at the clouds in this animation notice how at dawn they have the compacted normal look of stable maring air. But watch carefully and you can see how unstable air arrives and shows vertical growth as the land heats.

This vertical motion disrupts the wind flowing along the river making for the big lulls in the corridor.

So where did this unstable air come from? Typically a heat wave ends as an upper trough at ≈ 18,000 ft. moves over the west coast. An upper trough is an area of cooler ascending air that is moving onshore. As this air ascends the marine layer clouds thickens and moves from the coast into the Gorge. This denser air has higher pressure while the still hot deserts have less dense lower pressure air hence a pressure gradient and strong wind.

But this Pacific upper trough was more like a Cut-Off Low and had been wobbling around in the Pacific for days. And more importantly, the Cut-Off Low/upper trough had supported a surface storm system with lots of cloudy unstable air.

You can see this near Cut-Off Low and the surface storm in this animation from several days ago.

So yesterday the heat wave ended as the remains of the Cut-Off Low and surface storm and unstable air came over the Pacific Northwest.

The satellite animation below starts at dawn yesterday. First, note the flat appearing slow-moving marine layer clouds extending from the coast into the corridor. If only these marine layer clouds had been present we would have had a typical strong windy end of the heat wave.

Now, notice the fast-moving puffy cumulus clouds appearing first at the coast and rapidly moving over the corridor of the Gorge. These are the same clouds you see in the Skyline Hospital time-lapse above.  These clouds are comprised of unstable air and they disrupted the surface winds flow. So the corridor saw exceptionally up and down winds.

Usually, upper troughs are over 1000 mile 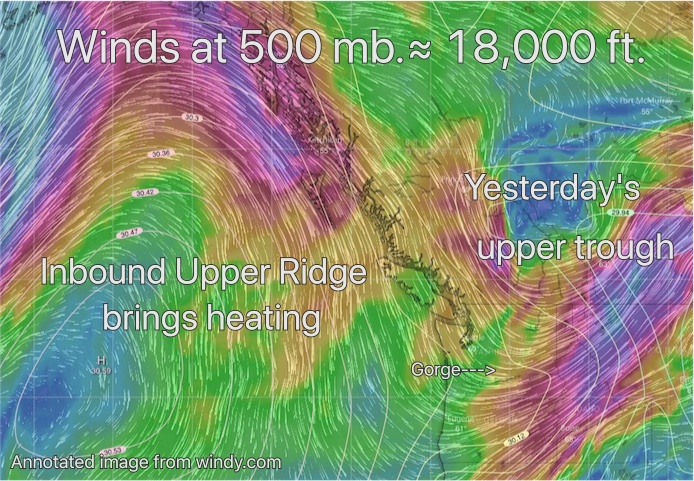 wide and move relatively slowly from west to east. But in the image below notice how yesterday’s upper trough is quite small and since it is moving fast it has almost departed from the Pacific Northwest.

That is why the marine layer clouds are so sparse today and why the winds are going to be weaker.

Take a quick look at 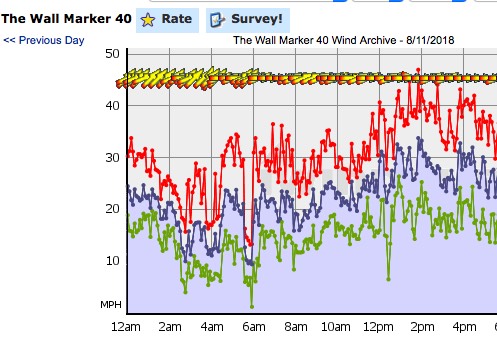 the texts from The Wall area above. At least at the time of those texts conditions where pretty miserable in that area.

The notoriously misleading Wall Marker 40 sensor appears to confirm those up and down winds. But what the wind graph does not capture is that the winds on the Washington side of The Wall were often much like the photo below.

The reasons for this have been covered in this blog about using the sensors in The Wall area. But basically, if you see any hint of West winds in this or nearby sensors you can expect weak UP AND DOWN winds at the Wall on the Washington side.